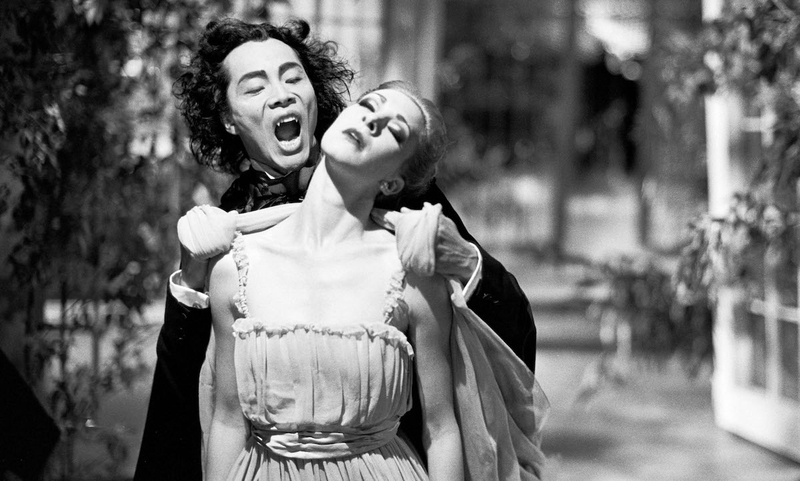 Editor's Note: This was originally published for FANGORIA on May 23, 2003, and we're proud to share it as part of The Gingold Files.

Even if you wouldn’t ordinarily be caught dead at a dance movie, you may well get a kick out of Guy Maddin’s Dracula: Pages from a Virgin’s Diary—which catches Bram Stoker’s “Un-Dead” in one. Having been impressed by Mark Godden’s production of Dracula for the Royal Winnipeg Ballet, Maddin had an inspiration that seems obvious in retrospect: turn the dialogue-less performance into material for a silent movie, and go all out in replicating the look and feel of early-20th-century filmmaking. The result can be enjoyed by both viewers with an interest in classic cinema and those intrigued by the alternate directions the current genre can take.

Maddin may adhere to general silent-movie conventions for the entirety of Dracula’s 75-minute running time, but he’s not exactly a formalist. The movie isn’t completely silent; beyond the use of Gustav Mahler symphonies as a score, he utilizes occasional sound effects at key moments, though he does entirely eschew spoken dialogue. In addition, his black-and-white cinematography (filmed on 16mm and Super-8 for the right grainy “vintage” look) is shot through with color-tinted moments in the manner of many early features. Along the way, Maddin has fun with the conventions of cinema itself; this is the first adaptation of Stoker’s book I can think of that presents Jonathan Harker’s visit to Castle Dracula as a flashback, complete with the silent form’s traditional intertitles (“A daring escape!”) that cause it to play out like a movie trailer.

The director also plays up the sexual/violent sides of the story in ways those early movies never did, staging the beheading of the vampirized Lucy and Dracula’s ultimate destruction in setpieces brutal enough to startle viewers lulled by the “old-fashioned” approach. Similarly, Maddin digs up and lays bare the subtext some have found in Stoker’s novel of the Count being a decadent foreigner come to despoil British propriety. This Dracula, ready and able to free the female characters from their sexual repression, is not the ratlike Max Schreck of Nosferatu or Bela Lugosi’s cultured European, but a dashing Asian (played by Zhang Wei-Qiang) with hair like Joe Millionaire. Speaking of which, he is revealed to be after not only England’s women, but its money, too. At the climax, when the heroes invade his lair and throw open one of his coffins, it proves to be filled not with his home soil, but with stolen cash.

Lest one think that the movie is just an intellectual exercise, let me also note that it is quite a bit of fun to watch. Even as he teaches an old dog new tricks, Maddin recaptures the fun of old silent flicks without eliciting humor at the form’s expense. The performances, in both dance and acting, capture the right spirit, and Maddin keeps everyone and everything in line, commenting on the long-gone style he’s invoking without winking at the audience to the point where the illusion is shattered. This may be one unlikely marriage of influences, but in it this offbeat auteur just might have created his most accessible film yet.