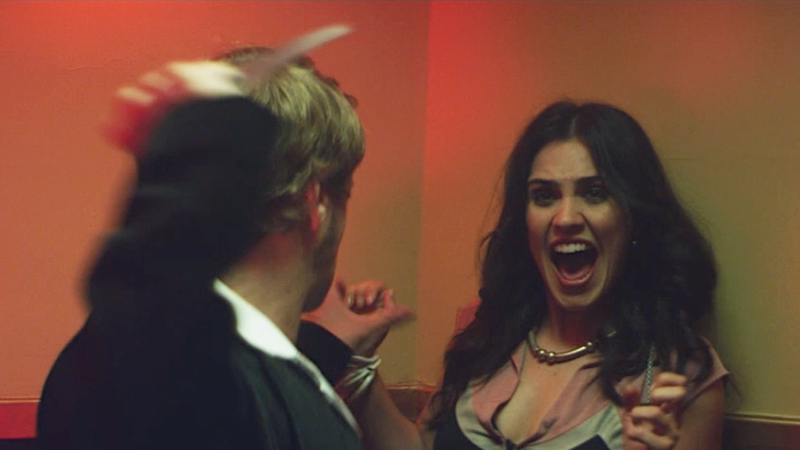 Editor's Note: This was originally published for FANGORIA on August 5, 2013, and we're proud to share it as part of The Gingold Files.

Amidst a sea of films attempting to recapture the glories of bygone exploitation fare, Discopath (a world premiere at the current Fantasia festival) gets it right—a swift, satisfying salute to the slasher cinema of the ’70s and early ’80s, with a premise it’s hard to believe no one employed back in the day.

As the movie’s title succinctly establishes, its villain is a young man who becomes aroused to violence whenever he hears the thumping beat of disco music. We first meet Duane Lewis (played by Jeremie Earp-Lavergne) as he’s losing a greasy-spoon job in 1976 Manhattan (played by Montreal, and populated by actors spouting outrageous Noo Yawk accents). Drowning his sorrows in a park, he meets a cute young woman named Valerie (Katherine Cleland), but their date goes south when she winds up taking him to the Seventh Heaven disco, and the music makes him manic.

Cut to 1980, and Montreal gets to play itself as the city to which Duane (now going by Martin) has fled in the aftermath of his ghastly crime. Wouldn’t you know it, he’s gotten a job handling the AV equipment at a religious school for young women overseen by strict headmistress Sister Mireille (Ingrid Falaise) and Father Antoine (Pierre Lenoir), who can’t quite keep his eyes off the young lovelies in their cute uniforms. For his part, Duane is able to resist any such temptations, and blocks any potential aural stimulation via a “hearing aid” he wears. But it’s just a matter of time before the beat gets into his head again and the body count begins, interspersed with an investigation by dogged NYC detective Jack Stephens (Ivan Freud) and the obligatory childhood flashback to the source of Duane’s mania.

All the pieces, as you can read, are in place for a catch-all homage to everything from stylized U.S. stalker films to European girls’ school screamers. Making his feature debut following a series of popular shorts, writer/director Renaud Gauthier plays Discopath straight but always with a knowing tongue in cheek regarding the conventions he’s employing, and applies familiar stylistic tropes in fresh ways. The Seventh Heaven murder, in particular, is carried off with Brian De Palma-esque bravura, the victim crawling for her life beneath the clear plastic floor as the club lights flash and patrons boogie obliviously above. The dual setting, which requires some characters to speak English and others subtitled French, is a fun gambit too; many horror films have featured villains with split personalities, but this is the only one this reviewer can think of where he’s bilingual as well.

Gauthier isn’t stingy with the splatter, either, going all out with the red stuff as Duane slays his way through authority figures and semi-dressed nubiles alike—one of the latter played, for an extra touch of perversity, by the filmmaker’s own daughter Sibylle. (The gruesomely impactful makeup FX were created by Rémy Couture, the artist whose arrest for creating on-line gore that proved a little too convincing was chronicled in the documentary Art/Crime.) Also giving the movie a steady pulse is the music by Bruce Cameron, composing variations on everything from the Halloween II score to the “Threshold” intro from the Steve Miller Band’s “Jet Airliner.” His work is augmented by a choice selection of vintage tunes, including a most appropriate use of KC and the Sunshine Band’s “I’m Your Boogie Man” and KISS’ “I Was Made for Lovin’ You” playing behind the climactic chase sequence, which spotlights some suitably low-tech car stuntwork.

Everything about Discopath, in fact, feels appropriate to the period that’s its setting and its inspiration—the movie even looks just right, John Londono’s cinematography capturing the hues and image density of pictures from those decades past. Clearly a fan of the era, Gauthier doesn’t filter his affection through ironic detachment or condescend to the material; he’s simply created a film—making the most of his low budget, and bringing it in at a tight 80 minutes—that could easily have played on 42nd Street alongside the latest indie slashers and Italian imports. Canadian ones, too—and on that note, is it a cultural signifier or just a strange coincidence that the past psycho-killerama with the most prominent disco infusion was the Toronto-lensed Prom Night?