Review: DIARY OF THE DEAD 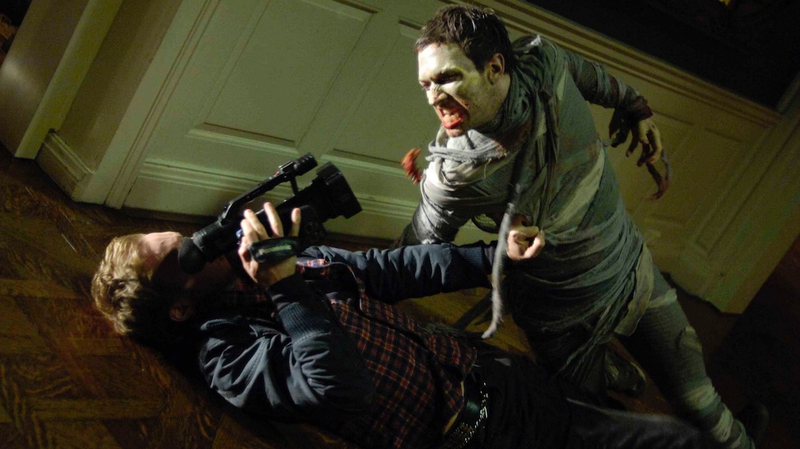 Editor's Note: This was originally published for FANGORIA on April 28, 2008, and we're proud to share it as part of The Gingold Files.

Many DVDs have alternate audio tracks one can choose to listen to, but Diary of the Dead is the first one on which I was hoping I could mute one particular sound channel instead. Specifically, it would have been a welcome option to silence the narration by Debra (Michelle Morgan), the film’s heroine, who has ostensibly edited together the video footage that makes up George A. Romero’s latest entry in his ongoing undead saga. This one reboots the previous movies’ themes for the digital age, centering on a group of film students who become caught up in a new dawn of the dead, capturing the burgeoning ghoul outbreak on their cameras—largely the one wielded by Debra’s boyfriend Jason (Joshua Close)—with bits and pieces stitched in from other on-line sources. This new vérité approach to his now-classic tropes gives Romero the opportunity to comment on a modern world overwhelmed by taped/Internet information.

And comment and comment and comment on it. Romero’s prior entries were all rife with sociopolitical undertones, but for the most part those were allowed to speak for themselves. Here, unfortunately, every point is boldfaced and underlined by Debra’s narration and occasionally in the spoken dialogue, to the point where the traditional cranial abuse inflicted upon the zombies becomes nothing compared to the way the movie beats you over the head with its statements. Romero’s heart is in the right place and the actors all do earnest work, but the constant reminders of how meaningful everything is gets in the way of the drama, and at times it undercuts the scares too. As the group enters a house that may be unoccupied, or inhabited by the living or the dead, Debra’s voice suddenly breaks in to state that she debated whether or not to reveal what happens next. That might—as Romero notes on the Dimension Extreme DVD’s commentary—add an extra wrinkle to her character, but it pretty much kills the scene’s suspense dead.

In fact, some of the best moments in Diary of the Dead are the humorous touches, particularly the bits involving Samuel the Amish zombie killer. (I’d love to see him get his own spinoff.) The gore is toned down from Romero’s previous entries, due to the caught-on-the-fly nature of the storytelling and the brief shooting schedule, but the writer/director does introduce a few amusing, fresh ways to off the undead, and the makeup FX overseen by Greg Nicotero and created by Gaslight are in the fine tradition of the Dead oeuvre. Due to those time constraints, the showier gags were created in postproduction via CGI, and the artificiality of a few of them is unfortunately heightened in the digital disc format. Otherwise, the 1.85:1 transfer is polished but not so slick that it betrays the images’ “amateur” origins, alternating appropriately naturalistic and muted colors.

The picture doesn’t shake as much as in other “found footage” horror movies; as commentating cinematographer Adam Swica points out, they didn’t want the audience getting nauseous. (“At least because of the camera movement,” Romero quips in response.) Nonetheless, certain shots that had be lensed static for FX purposes later had bouncing and weaving added to them in post, one of many revelations on the talk track by the director, DP and editor Michael Doherty. Here, Romero conveys his thematic concerns more succinctly than in the film itself, while the trio also address the technical challenges and the cutting decisions that went into conveying the sense of a homemade video document. The assorted directors who provided “guest voices” are revealed, along with actors who encored from Land of the Dead and zombie performers who appeared in the Dawn of the Dead remake (prompting another chuckleworthy aside from Romero: “We had to slow ’em down, keep them from running”).

The wide-ranging commentary is nicely complemented by the five-part documentary For the Record: The Making of “Diary of the Dead.” There’s much singing of the writer/director’s praises throughout; in Master of the Dead, Romero shares a few unfamiliar stories and is typically forthright in his disdain for current mainstream horror product. The specifics of acting directly Into the Camera are addressed by a couple of the cast in an actors’ piece, where the most fun discussion is by Philip Riccio, recalling that his character’s transformation into the walking dead required him to “do a bunch of different funny walks and hope that no one laughs.”

There’s plenty of meaty behind-the-scenes material in the You Look Dead! makeup FX segment, as assorted gore gags are tried out, and not quite enough step-by-step glimpses in A New “Spin” on Death, which covers the digital tricks. The specific nature of Diary’s shoot is compared to theater by both prosthetic artist Kyle Glencross in You Look Dead! and costumer Alex Kavanaugh in A World Gone Mad, an examination of the other design elements that proves just as interesting as the FX featurettes. Kavanaugh explains how practicality was required in the clothing choices (one character had to wind up in short sleeves for purposes of an arm-biting gag) and reveals an outfit that was recycled from Ginger Snaps Back: The Beginning, while aptly named production designer Rupert Lazarus explains how he filled the looters’ warehouse with goods on his low budget.

A collection of Character Confessionals, spoken by four of the principals directly to Jason’s lens, dramatically chart their changing reactions to the increasingly dire situation, while in a lighter vein, Familiar Voices are heard in a fun supplement offering the unedited voiceovers (recorded over the phone!) by Guillermo del Toro, Simon Pegg and Stephen King. And appropriately enough, given Diary’s subject matter, a few features from the movie’s MySpace page are included. Michael Felsher (who produced For the Record) provides an enthusiastic visual thumbnail sketch of The First Week of shooting, while Romero explains how he went back to The Roots of his zombie filmmaking with this project. Finally, the winners of a MySpace short-movie contest—Paul Del Vecchio’s Grand Prize recipient “The Final Day,” set partially in “Romero Park,” and four First Prize winners—reveal the many possible approaches to the ghoul genre, from the apocalyptic to the satiric. The writer/director hints on the commentary that he himself still has subjects left to explore in future walking-dead sagas—issues that the mooted Diary sequel hopefully won’t wear quite as bluntly on its sleeve.