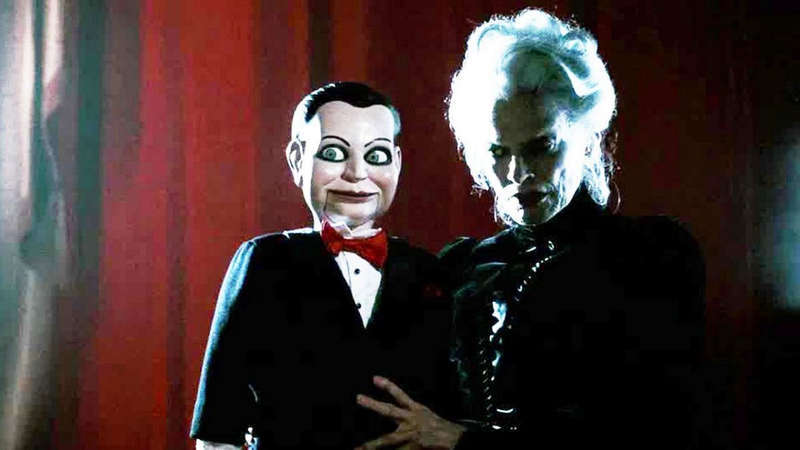 Editor's Note: This was originally published for FANGORIA on March 16, 2007, and we're proud to share it as part of The Gingold Files.

There were some people disappointed by the gripping yet deliberately paced Zodiac because, for them, it didn’t live up to the edgy promise of its billing as “From the director of Se7en.” I have a feeling there will be many viewers similarly let down by Dead Silence, which comes “From the writer and director and producers of Saw” (wouldn’t “From the creators of…” have sufficed?). And the disappointment will be warranted, because while director James Wan, scriptwriter Leigh Whannell and their producers previously took the serial-killer genre in twisty and torturous new directions, their new film largely falls back on literally creaky and dusty old-dark-house and haunted-town conventions.

The storyline follows the time-honored formula: young protagonist’s happy life is upset by horrible event, young protagonist returns to hometown to sort himself out, young protagonist discovers Dark Secrets, young protagonist undertakes investigation that leads him to walk through eerie abandoned buildings all by himself. In this case, our hero is Jamie Ashen (Ryan Kwanten), a city boy who one evening receives a mysterious package: a large box containing a vaguely menacing-looking ventriloquist’s dummy. Jamie’s wife Lisa (Laura Regan) seems to remember a childhood rhyme from their hometown suggesting that such dolls are bad news, but Jamie leaves her alone with it to go on a food run and…no prizes for guessing what happens next.

The rest of the film takes place in Ravens Fair, the town where Jamie and Lisa grew up and which, upon his arrival for her funeral, has clearly seen better days. Stores are boarded up, there’s a perpetual gloom hanging over the place and the only residents who appear to be left are Jamie’s father (Bob Gunton, underused), from whom he has long been estranged, Dad’s new trophy wife (Amber Valletta, wooden enough to suggest perhaps she’s a dummy), the local mortician (Michael Fairman) and his wife (Joan Heney), who’s so disturbed by an evil presence hanging over the town that she carries around a dead crow and is given to hiding in the dark, cobwebby spaces under their house at regular intervals. Oh, and there’s Detective Lipton (Donnie Wahlberg), who follows Jamie to Ravens Fair just waiting for an official excuse to arrest him for Lisa’s murder, and that dummy, which Jamie brings along with him, hoping to figure out its connection to her death.

Jamie soon begins learning of the legend of Mary Shaw (Judith Roberts), a ventriloquist from decades past whose ghost is said to inhabit the town, haunting the living and tearing their tongues out when they scream. (Since Jamie lived there for years, one would expect he’d be more familiar with the tale than he is, but hey, you’ve gotta get that exposition out there somehow.) The dummy, nicknamed “Billy,” is clearly a harbinger of her presence, but unless you’re automatically freaked out by such dolls, he’s just not that scary. With the exception of a well-done flashback to one of Mary’s performances, Dead Silence never gets at what’s really unnerving about ventriloquist’s dummies: the possibility of an inanimate object expressing its own personality. Mostly, Wan is content to linger portentously on long shots of Billy, as everyone waits for the moment when his head turns or eyes move all by themselves.

Wan and Whannell have stated that Dead Silence was an intentional retreat from the aggressiveness of Saw to a quieter, more old-fashioned style of horror, and the ambition is laudable (if undercut somewhat by frequent shock cuts and bursts of returning composer Charlie Clouser’s score). Unfortunately, the story isn’t fresh enough and its people aren’t compelling enough to keep the spookery from seeming old hat. Jamie is a cipher, existing solely to be acted upon by the plot, while the wisecracking, hardboiled Lipton seems to have been written as the comic relief yet is played straight by Wahlberg. The characters in general feel like they’re in a rush to get through the first two acts of backstory and buildup, glossing over a number of implausibilities in the process, on the way to the real action in the final half hour.

Once Jamie heads off for his confrontation with the malevolent Mary, the resulting setpieces elicit genuine shivers here and there and pack a couple of neat story twists that have been subtly set up in previous scenes—dare I say, you probably won’t feel like a dummy for not seeing them coming. And there’s an effective gimmick Wan uses at several points: Before Mary’s spirit comes after a victim, all noises drop off the soundtrack except for those the potential victim makes him or herself. Perhaps that’s what the title Dead Silence is meant to refer to—but too often, unfortunately, it also reflects the likely audience reaction to this film.