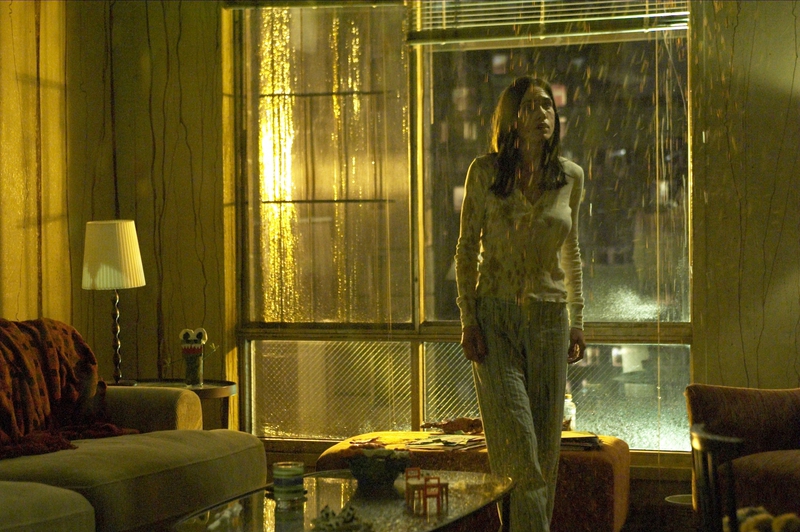 Editor's Note: This was originally published for FANGORIA on July 8, 2005, and we're proud to share it as part of The Gingold Files.

Dark Water is the first of the recent run of Asian-horror remakes I’ve seen without having viewed the original first, though a few of its key tropes are clearly recognizable from the Ring and Ringu films, whose original director Hideo Nakata and source author Koji Suzuki were also attached to the Japanese Water. You’ve not only got a young mother with a small child plagued by supernatural phenomena, but the ultimate source and nature of the haunting strongly echo the Ring/Ringu collection as well. Yet despite the familiarity of the material, Dark Water succeeds through the details of its storytelling—and the fact that it is as much a psychological drama as a horror film.

By focusing more on the heroine’s down-to-earth tribulations, and her inexorably crumbling mental state, than on the supernatural stuff, the makers of Dark Water take the curse off the fact that we’ve seen most of the latter before. And from practically the very first scenes, they elicit a palpable sense of subtle urban menace; it has become a cliché for makers of non-explicit horror films to say they’re following in the tradition of Rosemary’s Baby, but this one warrants the comparison. Like Baby, Dark Water is set in New York, but the central location is a far cry from the upscale Dakota Hotel. Dahlia Williams (Jennifer Connelly), fleeing a contentious divorce with her little daughter Ceci (Ariel Gade) in tow, winds up taking an apartment in a dilapidated building on New York City’s Roosevelt Island. The movie suggests she desires to put the entirety of Manhattan between herself and ex-husband Kyle (Dougray Scott), who has settled in Jersey City near a new girlfriend, but the Island also serves as a hell of a setting for an urban ghost story.

Dark Water may resonate most strongly with city dwellers who can relate to the problems Dahlia confronts in her new place, paranormal source or no. Not only does someone run around noisily in the apartment above hers, but she also has to deal with a spreading, nasty water stain on her ceiling. Clearly her upstairs neighbors are irresponsible types, except—oops!—no one’s living there at the moment. Meanwhile, Ceci has developed an imaginary friend, a child’s abandoned book bag keeps turning up for Ceci and Dahlia to find—and for a while, all of the strange events would seem to any rational person to have perfectly reasonable explanations. Perhaps the increasingly anxious Dahlia is simply cracking under the strain of the divorce and her other personal problems—and director Walter Salles and scripter Rafael Yglesias are able to persuasively make that suggestion even though the audience knows there’s a ghostly presence hanging around.

Yglesias’ smart, literate screenplay is complemented by the naturalistic direction of Salles, the acclaimed Brazilian director of The Motorcycle Diaries making his Hollywood-studio debut. The two keep their focus tight on Dahlia, who is brought vividly to life by Connelly. Once again de-glamming for the role after Requiem for a Dream and House of Sand and Fog, the actress is compelling and sympathetic, and creates a very convincing mother-daughter bond with the accomplished young Gade. The men in the cast are equally fine: John C. Reilly is dead-on as the fast-talking realtor whose enthusiasm for Dahlia to take the apartment lasts only as long as it takes her to sign the papers; Pete Postlethwaite is gruffly amusing with a touch of menace as the building’s maintenance man; Scott brings humanity to the angry Kyle; and Tim Roth nicely plays against type as what may be the last sympathetic lawyer in New York City, who takes Dahlia’s case. There are moments where the movie seems to hint that perhaps he and Dahlia could get something going together, but that convention is nicely sidestepped when he claims to have a family he actually doesn’t—which also ties in to the film’s underlying themes.

These help add extra resonance to the story’s spooky elements, though the more explicit attempts at fright aren’t quite as effective as the overall atmosphere of the piece. Cinematographer Affonso Beato suffuses the film in a blighted atmosphere of decay and dread, while production designer Therese DePrez and her team exhaust the palette of brackish browns, yellows and greens as Dahlia’s environment becomes increasingly corrupted. And soaked—as the spectral presence grows stronger, icky black water begins spewing from faucets, toilets and a washing machine, the latter in a laundry room from hell which is the only place where the craft team go a little too far with the threatening atmosphere.

Dark Water may disappoint those seeking the more traditional jolts and suspense found in the likes of The Ring and The Grudge, but it works on a subtler, more intimate level. The filmmakers stay true to their material and the ending doesn’t cop out, even as it manages to find a ray of hope amidst the gloom. Think of how The Sixth Sense concluded on a low-key but satisfying contemplative note—before the big twist—and you’ll have an idea of the way Dark Water pays off.