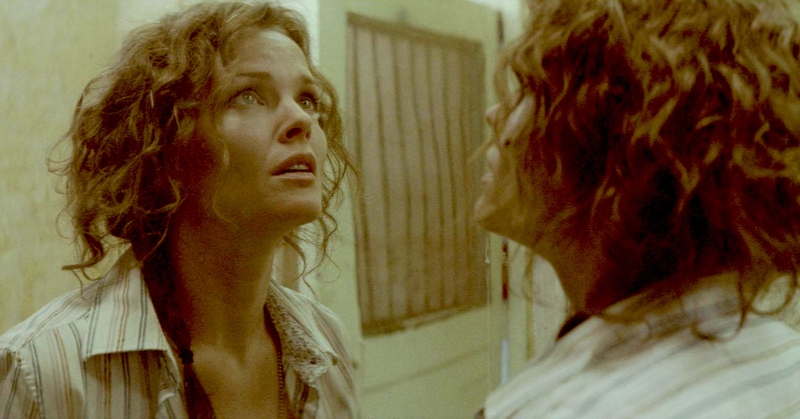 Editor's Note: This was originally published for FANGORIA on November 9, 2007, and we're proud to share it as part of The Gingold Files.

I don’t know for sure, but I wouldn’t be surprised if Crazy Eights (part of the 2007 After Dark Horrorfest) was written based on a found location. The crumbling, long-abandoned hospital in which much of the film is set is one spooky place, and though the design/set decoration team most assuredly augmented the atmosphere with their contributions, the building’s built-in eerie mood makes it appear to be a horror movie waiting to happen. Cinematographer Stephen Lyons shoots the hell out of it, too, utilizing motivated light (flashlights in dark corridors, overexposed sunlight in the windows obscuring any view of the outside) to amp up the terror of the people trapped within. It’s just a shame that the people themselves aren’t nearly as compelling as the place where they become imprisoned.

Crazy Eights does have a stronger-than-usual cast for this kind of indie production, including Frank Whaley, the Saw series’ Dina Meyer, Traci Lords, George Newbern and Gabrielle Anwar (Body Snatchers), plus Dan Deluca, who also wrote and produced the movie with Patrick Moses and director James Jones. The sextet play a group of friends-since-childhood who, in the Big Chill-esque opening, receive invitations to the funeral of another pal who has recently died. A map they’ve been bequeathed leads them to a remote barn, where they discover a trunk containing a long-dead corpse and are subsequently stymied in their attempts to drive away. After passing the same house three times in succession, they decide to inquire for help inside and wind up trapped in the cellar, where a passageway leads them to that haunted hospital.

Just what is haunting the crumbling facility, and its connection to our protagonists, is pretty obvious based on Crazy Eights’ prologue and a couple of early clues. All that’s left is for the six friends to get bumped off one by one, realize for themselves what’s going on and try to figure a way out. It’s a more than serviceable formula, but the details of the horrific drama have little impact because the would-be victims are barely developed as people, beyond the fact that Brent (Whaley) is an obnoxious jerk and Beth (Anwar) seems troubled and a little freaked out even before arriving at the hospital. They’re more defined by their group experience, past and present, than as individuals, and thus it’s hard to get caught up in their plight as they start getting killed, no matter how evocatively filmed it all is.

Though there are a couple of messy moments (well-done bloodshed by Jeremy Selenfriend of Monster in My Closet), Jones largely plays coy with the mayhem, in once case staging a fatality juuuuuust out of camera range to the point where his restraint calls attention to itself. He’s clearly aiming higher than the usual gorefest, as evidenced by his ambitious casting (the actors all do good work under the circumstances) and a scenario that grapples with Big Themes like guilt and responsibility. On the surface, at least, Crazy Eights has a classy veneer that elevates it above its gang-of-friends-getting-isolated-and-killed cinematic brethren.

What’s lacking is a sense of emotional engagement with the doomed souls that would make their fates as scary as intended. Running only 80 minutes, the movie could easily have been longer, with equal time spent getting into the characters’ heads as is devoted to hinting at and ultimately explicating their collective backstory. This is one game of Crazy Eights where it’s the viewers who might feel they’ve been left empty-handed once the filmmakers have laid all their cards on the table.