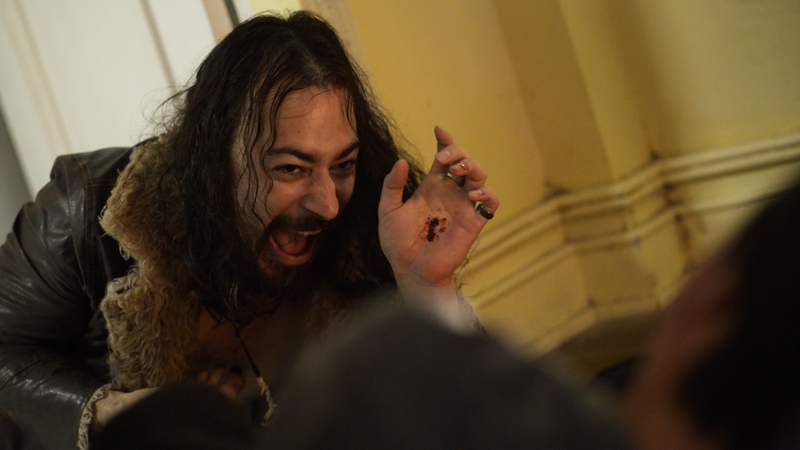 Editor's Note: This was originally published for FANGORIA on July 11, 2013, and we're proud to share it as part of The Gingold Files.

As calculated for Asian/American crossover youth appeal as a movie can be, Countdown is nonetheless a sprightly little slice of exploitation that delivers its nasty goods within a tight running time of 90 minutes and change—a relief at a time when a lot of Far East cinema seems determined to extend itself at all costs to and past the two-hour mark.

A Thai production set in New York City on New Year’s Eve, Countdown (a North American premiere at the New York Asian Film Festival) focuses on a trio of college-age characters who are more appropriately dressed for Memorial Day weather—the first sign that the movie’s rules of reality will be somewhat fluid. Bee (Jarinporn Joonkiat) is the thoughtful one of the three (she’s first seen entering a church confessional, more for psychological refuge than to absolve herself of any past sins), while the devil-may-care Jack (Pachara Chirathivat) and Pam (Pattarasaya Kreuasuwansri) are primarily concerned with scoring some weed to help smoke in the New Year. Unfortunately, their dealer has turned over a new, er, leaf and can’t hook them up, so a little detective work later, they get the phone number of his supplier, minus one digit. They choose a fill-in at random, make the call—and that’s where the fun begins.

The voice at the other end of the line is Jesus (that’s Je-sús, of course), who’d be happy to bring over some pot for them. Rather than mellow everything out, Jesus, as portrayed by David Asavanond, sparks the movie to true life. A French-born, New York-trained actor based in Thailand, where he previously appeared in the Tony Jaa mindblower Tom Yum Goong (a.k.a. The Protector), Asavanond is a rude force of nature in Countdown, initially appearing to be an aggressively friendly sort who’s happy to spark up at the kitchen table with Jack and Pam. There’s a slight edge of danger under his joviality, though, and his tone inevitably turns from ingratiating to threatening, until he has made Bee, Jack and Pam prisoners in their own apartment, subject to torturous games involving a nail gun, the more traditional kind and other implements that force them to expose the dark corners of their personalities and pasts.

It’s not hard to see from the start that Countdown will evolve into a sort of Saw-esque morality play. Bee, who in the early scenes discovers she’s dodged a pregnancy bullet, seems to have some other past concern gnawing at her, while Jack and Pam have been gleefully spending money their parents have sent them for school and living expenses on partying and clothes, respectively. So what Jesus is throwing down is a little spiritual retribution, especially when he challenges the bound threesome at pistol-point to repeat the tenets of Buddhism from memory. Fortunately, writer/director Nattawat Poonpiriya, making his precocious feature debut, doesn’t get heavy-handed with the religious allegory, nor does he rub the audience’s face in the sadism to the point where you just want to withdraw from the whole thing. With energetic pacing and variety in his camerawork (including a cool overhead shot) and staging, he’s able to maintain a certain amount of sympathy for the kids through their terrified travails, even as Asavanond keeps stealing scenes with his vicious charisma.

The protagonists may be foreigners in New York, but their concerns are identifiable to any post-college-ager—as will be, no doubt, the not always mature ways they go about dealing with them. Similarly, while shooting on Thai sets with a few exteriors lensed in Manhattan and Queens, Poonpiriya cannily exploits universal apartment-dweller concerns, from the potential of letting in the wrong guest to, in one elevator-set scene, proliferation of vermin. And he’s got a nice line of dark humor running through the film, particularly a bit involving a piano. His movie ultimately counts down to a resolution that may rub some viewers the wrong way, but is of a piece with the film’s themes and its playfully nasty approach to horror, which makes this a diverting entry on the crowded Asian genre scene. And it announces Asavanond as an actor who’s clearly going places.