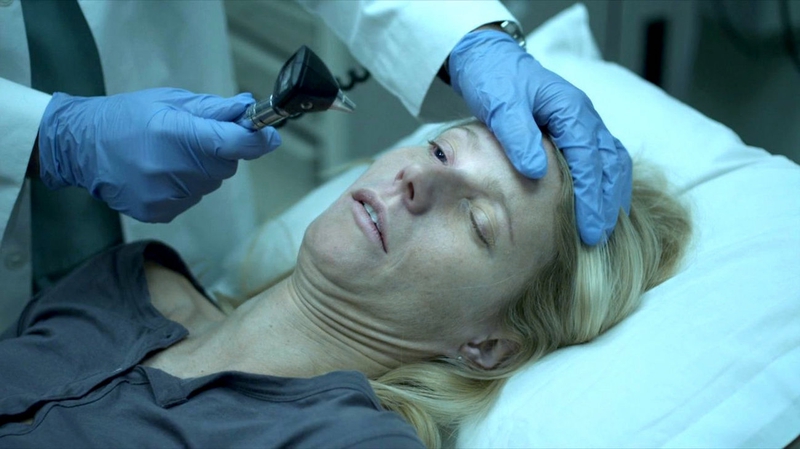 Editor's Note: This was originally published for FANGORIA on September 9, 2011, and we're proud to share it as part of The Gingold Files.

Don’t go to Contagion expecting a germophobic shocker full of people undergoing grisly viral meltdowns, or a pulse-pounding thriller about the race for a cure. Director Steven Soderbergh is after something different, which works equally well, just not in the way the movie’s being pitched in its marketing.

In the style of his previous Oscar-winner Traffic, though not quite as gripping, Soderbergh and screenwriter Scott Z. Burns frame their outbreak saga as a multiple character study, intercutting among civilians and specialists as they deal with a spreading, lethal disease. They begin with Patient Zero, a.k.a. Beth Emhoff (Gwyneth Paltrow), who comes home from a business trip in Asia suffering from something much worse than jet lag. As her husband Mitch (Matt Damon) rushes her to a hospital where none of the doctors can figure out what’s wrong with her, we’re given glimpses of others afflicted with the same sickness: a young man in Hong Kong (whose sister is played by Dream Home’s Josie Ho), and a Japanese bus passenger who collapses in front of his startled fellow riders. One of them captures the incident on his cell-phone camera, and that video winds up on the blog of conspiracy theorist Alan Krumwiede (Jude Law), who stokes the first fires of panic.

Rather than pump up the tension of these introductory passages, Soderbergh presents them in an unhurried, observational manner that emphasizes identifiable realism and carries throughout the rest of the movie. Instead of using fright-flick tropes, he aims to unsettle you by emphasizing the ease with which such a contact-based pandemic might spread, with plenty of close-ups of hands on public-transportation posts, fingers on touch-pads and lips on drinking glasses. Evocative use of international locations (or possibly extremely well-done recreations thereof) heightens the film’s through-line, which is that in this day and age of commonplace worldwide travel, such a disease could cross the globe before anyone has an inkling that it’s out there and needs to be contained.

Chief among those trying to deal with the pathogen, which is dubbed MEV-1, are Center for Disease Control and Prevention deputy director Ellis Cheever (Laurence Fishburne), who sends his enthusiastic young colleague Erin Mears (Kate Winslet) into the field, and Dr. Leonora Orantes (Marion Cotillard), a World Health Organization doctor who tries to track back through Beth’s movements via surveillance footage to determine where the bug originated and thus determine how it can be stopped. While emphasizing the usefulness of modern communications and video technology to handle such situations, Contagion’s filmmakers also evince a skepticism of the Internet, as personified by Krumwiede, whose alarmist postings in the cause of revealing the truth may be doing as much harm as good. In a line sure to be quoted across the Web, Dr. Ian Sussman (Elliott Gould in a brief but vivid turn), who first identifies the virus, tells Krumwiede, “Blogging is not writing; it’s graffiti with punctuation.”

As things get worse in every major city, Soderbergh and Burns hold back on the spectacle; there are just enough glimpses of looted streets, mobilized military vehicles and mass graves to allow a sense of the bigger picture while they maintain their tight focus on the people and the literal life-and-death decisions they must face. Part of what makes Contagion work is the way its civilian and professional characters become united in their goals: Mitch tries to keep his teenage daughter Jory (Anna Jacoby-Heron) sheltered and uninfected; Dr. Cheever uses his status to secure preferential treatment for a family member; a key character is kidnapped, but by people anxious to keep their own loved ones alive. Throughout, there are sufficient references to SARS, H1N1 and West Nile to root the film in recognizable concerns and make it clear that Burns really did his research.

The cast playing the assorted health officials and workers are believable both as professionals and individuals (Jennifer Ehle is a standout as a doctor struggling to develop a cure), Law is properly shifty (though his artificial snaggletooth probably wasn’t necessary), while Damon is typically sturdy as an Everyman in a desperate situation. Serving, as usual, as his own cinematographer under the pseudonym “Peter Andrews,” Soderbergh shot the movie on hi-def video that gives the images a properly unhealthy cast, and Cliff Martinez contributes a terrific score that mixes electronics and physical instruments and is always well-attuned to the emotion of the scenes.

Contagion is kind of the anti-28 Days Later in the way it maintains a calm demeanor in the face of a storm of death and hysteria. Its quietly engrossing tone is a welcome alternative in these days of assaultive, over-edited cinematic action, and it may well have you leaving the theater turning over the scenario’s chilling possibilities for coming true in your mind.