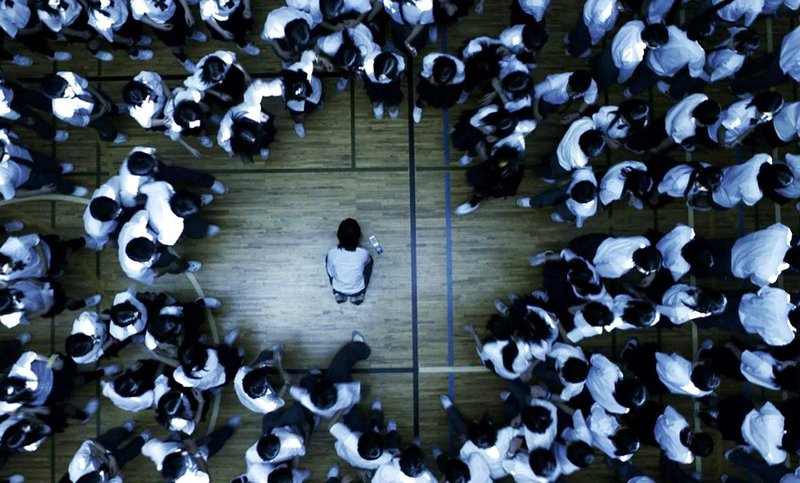 Editor's Note: This was originally published for FANGORIA on June 30, 2010, and we're proud to share it as part of The Gingold Files.

It’s difficult to discuss the Fangorian appeal of Confessions, making its international premiere at the New York Asian Film Festival, without giving away too much. It’s the kind of film that grabs you and holds you by plumbing the depths of damaged psyches and exploring different kinds of emotional, rather than physical, violence—before getting to its endgame, which sends you out of the theater with your soul shuddering. To even suggest what that entails would be a crime, though not nearly as harsh as those that transpire on screen.

The movie, written and directed by Tetsuya Nakashima, opens with a nearly 20-minute scene set in the seventh-grade classroom of Yuko Moriguchi (Takako Matsu). It’s not only the last day of school but Yuko’s final day as a teacher, and the kids are in an especially inattentive and rambunctious mood. She soon gets their attention by explaining why she’s leaving: Her 4-year-old daughter drowned earlier that year in the school swimming pool, and she never bought the official explanation that it was a tragic accident. As a matter of fact, she has managed to uncover the identities of the two youths responsible; they’re members of her very class, and though she refers to them as “Student A” and “Student B,” it’s clear that at least some of their schoolmates are well aware of who they are. Then Yuko, who knows that the culprits are too young to face official prosecution, explains exactly how she’s achieving her own brand of justice, and the stakes become instantly, dramatically raised.

Confessions is based on a best-selling, award-winning first novel by Kanae Minato, and Nakashima’s screenplay adopts a literary structure. It proceeds as a series of chapters, or “Confessions,” in which the secrets and motivations of both the young teens and their parents are revealed. And it’s not a pretty sight: The children are disturbed to varying degrees; the adults either enable their antisocial behavior or do nothing to quell it; love, both parental and romantic, is doomed. As more points of view are explored, we get to the truth about what really happened to Yuko’s daughter—but this is no gimmicky time-hopping drama. Instead, Nakashima creates a complex tableau of scarred lives, probing how each individual deals with his or her own trauma—and frequently makes the wrong choice.

While the cinematography by Masakazu Ato (who shot Nakashima’s previous, highly praised Memories of Matsuko and Kamikaze Girls) and Atsushi Ozawa is awash in cool, clinical tones, you don’t watch Confessions in a state of detachment. Nakashima digs deep and gets to the psychological truth of each of his characters, and as harrowing as the trip can be, it’s also fascinating and compelling. Not to mention a little terrifying, as certain of the protagonists/antagonists (it’s hard to define practically anyone here as simply one or the other) are pushed to extremes that wind up including murder. The performances are all terrific, led by Matsu, in a role that’s reportedly an intentional 180 from the sympathetic heroines she has previously essayed on Japanese television. She’s chillingly good as a woman walking through a world that has stolen everything she cares about, leaving her a shell devoted only to effecting the cruelest payback possible. Her students are made up of nonpros selected from over 1,000 young people Nakashima auditioned; there’s not a weak link among them, and lacking a cast/character list, I can only note that the boy who plays the more sociopathic of the two killers deserves an immediate place in the pantheon of truly scary screen teens.

Just don’t expect the scares to be on the surface for much of Confessions. Instead, the movie gradually crawls under your skin, minute by minute, taking its time in letting you get to fully know its tragically flawed ensemble. Along the way, it addresses topics like parent-child relationships, school violence and bullying, in ways that might provoke discussion afterward. But it’s almost certain that the final 15 minutes, a lengthy resolution in which two people’s pain reaches its apex, will stay with you the longest.