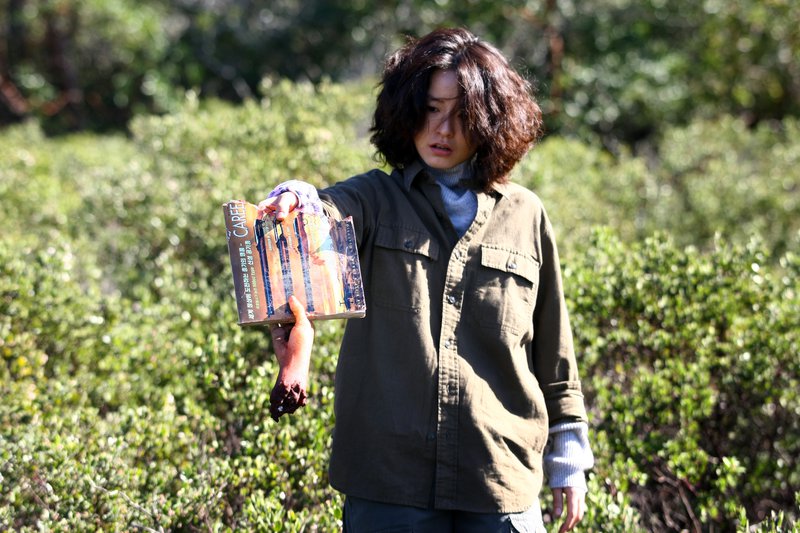 Editor's Note: This was originally published for FANGORIA on June 28, 2010, and we're proud to share it as part of The Gingold Files.

You might expect an Asian flick about a rampaging, man-eating giant wild boar to be a simple, down-and-dirty creature feature, but Chaw (playing at the New York Asian Film Festival) is more ambitious than that. While it delivers the goods in terms of monster action, it also tries to deliver a lot more, with varying levels of success.

A South Korean production directed by Shin Jeong-won, Chaw seasons its nature-amok stew with both satirical and goofy comedy, family drama and pathos. A number of specific borrowings from Jaws (most notably a sequence in which the predator terrorizing a small community seems to have been caught, but a dissection reveals otherwise) coexist alongside, ahem, “homages” to everything from Predator to Hot Fuzz. The latter comes into play in the early scenes where our policeman hero, Kim Kang-soo (Eum Tae-woong) is transferred from his city post in Seoul to Sam-mae-ri, a self-proclaimed “crimeless village.” The people may not be harming each other here, but something that grunts and growls and has a fast-moving, red-tinted point of view has been chowing down on assorted locals, most recently a young woman (in a cruelly ironic setpiece) who turns out to be the granddaughter of retired hunter Mr. Chun (Jang Hang-sun).

The opening reels introduce us to these and a lot of other sundry characters, including the nutty village Chief (Kim Ki-chun), hotheaded local Captain Yoo (Lee Sang-hee), trenchcoated Detective Shin (Park Hyuk-kwon), TV-celebrity hunter Baek (Yoon Jae-moon), a weird woman (Go Seo-hee) who lurks around town, a couple of visiting university nerds who want to capture the strange phenomenon on tape, etc. That’s a lot of character baggage for the movie to handle, and it all seems to have been loaded in here to get the movie to the apparently required Korean length of two hours plus. Sometimes the extra running time can allow filmmakers to add meaningful depth and breadth to their stories (like Bong Joon-ho did in The Host, whose genre-blending no doubt influenced this one), but Chaw gives the impression that it would have worked better overall if trimmed down to a tight hour and a half or so.

Still, there are humorous asides and grace notes that work scattered throughout the 122 minutes, and Shin (who previously combined ghosts, gangsters and humor in his only other feature, 2004’s Sisily 2km) does well by the creature stuff. When the big porker attacks the town hall, interrupting a party where the merriment includes a performance by “underground band” Love Space (complete with music-video-style onscreen ID), and later goes after the protagonists when they form a hunting party to track it down and kill it, Shin creates a modest level of genuine excitement. The CGI utilized to create and animate the beast isn’t quite up to the ultrarealistic standards seen in The Host (or Jurassic Park, yet another direct antecedent), but it’s good enough to get the job done and the point across.

Throughout, Chaw ticks off all the required animal-attack-genre story points, from a brief explanation of how the military is responsible for the beast’s presence to the sequel-suggesting parting shot. Given that this particular animal hasn’t had much fright-film exposure since Razorback (evidently it’s a coincidence that Chaw is coming hard on the hooves of Pig Hunt), devotees of the form will definitely want to check it out, and as uneven and overlong as it is, genre fans of any stripe are unlikely to find that the movie—my apologies—boars them.