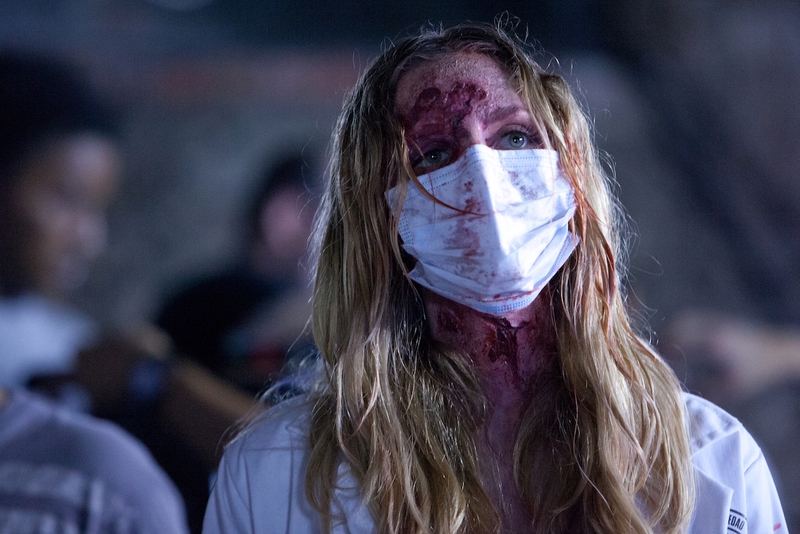 Editor's Note: This was originally published for FANGORIA on August 1, 2014, and we're proud to share it as part of The Gingold Files.

After the behind-the-scenes debacle of the first Cabin Fever sequel, one could have hoped that the next installment would be a return to the original’s form—but after a promising start, it literally descends into the mundane.

Cabin Fever: Patient Zero begins with a vacationer named Porter (Sean Astin) being imprisoned in a secret government lab, an unwilling subject of study because he’s an asymptomatic carrier of a virulent flesheating virus that has already killed his son. The attendant scientists intend to use him to develop a virucide, while Porter wants only his freedom, and goes from desperation to manipulation over the course of his scenes. That transition could have fueled a compelling, claustrophobic character study, but the demands of the formula dictate that there must also be youths in peril, so Porter’s plight is intercut with that of a group of party-heartiers.

Specifically, Marcus (Mitch Ryan) arrives in the Dominican Republic with best friend and business partner Dobbs (Ryan Donowho) for his wedding, also attended by Marcus’ über-hedonist brother Josh (Brando Eaton) and his girlfriend Penny (Jillian Murray). Dobbs and Josh have planned a surprise bachelor-party outing to an unspoiled, off-the-map island, on which Penny—who evidently still harbors unresolved feelings for Marcus—tags along. Scripter Jake Wade Wall builds some decent character development and tension as he establishes the group dynamic, and he and director Kaare Andrews pull off an inventively icky introduction of Josh and Penny to the viral threat, as they come across a bunch of rotted fish while snorkeling.

What’s not immediately apparent to them is, of course, quite clear to the audience, even if we didn’t keep jumping back to Porter and the scientists trying to deal with his condition. The back-and-forthing undercuts the possibilities of building real tension, and despite a couple of gross-out interludes (including an attempt to top the first film’s “finger-bang” scene, in which Josh tries to relax a panicking Penny by going down on her and…yeccchhh), the pacing flags as we await the inevitable moment when our heroes set out for help and find their way to that lab.

What made the original Cabin Fever work was that for all the extreme, sometimes black-comic nastiness, it was grounded in how the characters emotionally dealt with the reality that they were getting very, very sick. That angle is abandoned midway through Patient Zero, as it becomes just one more prowl through dim/strobe-lit corridors and surgical rooms while ducking attacks by deranged, infected victims. Vincent J. Guastini’s copious makeup FX deliver the cringe factor, but in the absence of genuine investment in the people rotting and getting spewed on, there’s little of the deep-seated horror that Eli Roth successfully got at.

A couple of small surprises do crop up along the way; an early scene of Marcus receiving wedding presents from his pals seems clearly intended as a setup for him to use one of them to help himself later, only for the other, cruder gift to come into play during a climactic action scene. That setpiece—a no-holds-barred brawl between two putrefying ladies—was no doubt intended as an over-the-top highlight, though it also begs the question of where these two dying dames find the energy to keep fighting. And as the movie closes with the promise of further adventures for the disease (Cabin Fever: Outbreak is coming next), you’re also left to wonder if there’s really much more that can be done with this particular premise.