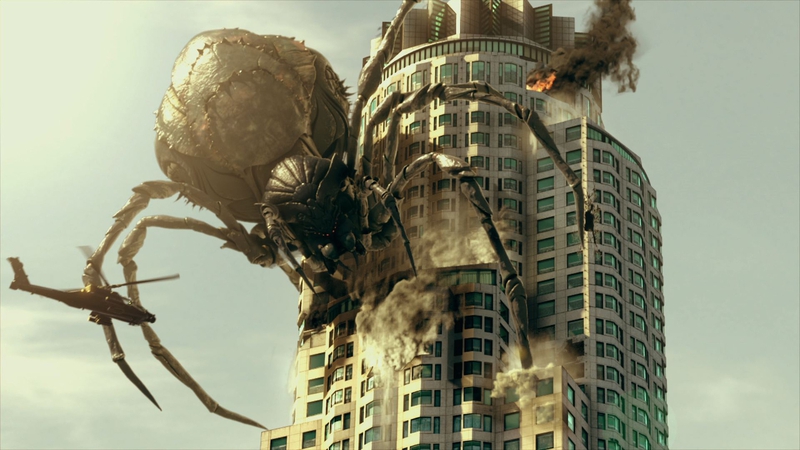 Editor's Note: This was originally published for FANGORIA on July 23, 2013, and we're proud to share it as part of The Gingold Files.

The noted philosophers of Spinal Tap once observed that “There’s a fine line between stupid and clever,” and it’s that delineation that gives Big Ass Spider! eight legs up on the vast majority of its made-for-cable/video nature-gone-wild brethren.

Playing at Montreal’s Fantasia festival following screenings at the Boston Underground Film Festival and SXSW, Big Ass Spider! is quickly recognizable as the work of The Convent director Mike Mendez, opening with his traditional slo-mo action scene with pop-song accompaniment—in this case, a Storm Large cover of The Pixies’ “Where Is My Mind?” This is actually a flash-forward to the devastation wreaked by a very large-posteriored arachnid, and the movie then jumps back a day or so to introduce us to Alex (Greg Grunberg), exterminator extraordinaire and our blue-collar hero. Fortunately for mankind in general and Los Angeles in particular, he happens to be in a local emergency room just as a corpse arrives at the hospital bearing a multilegged stowaway that, needless to say, quickly gets loose.

Also needless to say, the military is not far behind, led by hard-as-nails Major Braxton Tanner (Ray Wise) and beautiful but by-the-book Lt. Karly Brant (Clare Kramer). Further needless to say, there’s an accompanying scientist, Lucas (Patrick Bauchau), on hand to deliver exposition and warnings and to clash with Tanner about how to deal with the situation. If these characters are types familiar from a hundred past monster flicks, they’ve been given little quirks of dialogue and performance that elevate them beyond the clichés. The wild card in the scenario is Alex, soon joined by a joker in the person of Jose (Lombardo Boyar), a hospital security guard who attempts to help Alex flush the spider out and becomes his partner in defending LA when the thing outgrows the facility’s walls.

Though a lot of Big Ass Spider! is pitched for humor, it neither descends into outright spoofery nor mocks the genre whose conventions it’s employing. In fact, an early scene in which the still-just-somewhat-oversized-ass spider invades a patient’s room demonstrates Mendez’s skill at eliciting straight creepy-crawly shivers. Once the critter enlarges to titanic proportions and begins stepping on and ascending buildings, Mendez milks his limited budget to the hilt, judiciously and vigorously staging the monstrous rampage and destruction. The visual FX by up-and-comer Asif Iqbal and Ice Animations won’t be mistaken for ILM or Weta work, but they’re good enough to sell the situations, energetic enough to spark these sequences and far superior to a lot of what turns up in similarly themed Syfy flicks.

At the same time, even though the spider is the nominal star, it’s the byplay between the two leads that truly keeps the movie aloft throughout its brisk 85-minute running time. Grunberg, a regular in film and TV fare from J.J. Abrams, knows just how to pitch his pressed-into-service hero, whether charging into (or away from) battle or attempting to impress the lovely Lt. Brant, whom Kramer makes a charming foil. Grunberg also has great comic chemistry with Boyar, who bestows a role that could have settled for Hispanic stereotyping with genuine personality and individualistic humor. The duo’s banter is great fun, and a blessed relief from the kind of dialogue filler one often finds in low-budget creature features; indeed, they sometimes come off like two guys on a mission to save this B-subgenre from its own worst inclinations. It would be great to see them follow up with a series of features in which they take on a big ass scorpion, praying mantis, etc.

If they do, Mendez will hopefully be along for the ride to guide them. Working from a script by Gregory Gieras, he has ironed the (pardon the expression) bugs out of this formula and made it seem fresh again. It may still be a B-movie, but it’s a tonic in the current independent-horror climate; as a fan of indie genre fare, it’s sometimes stuck in my craw that certain films have been celebrated across the mainstream media for being “so bad they’re good” while truly worthy smaller productions are ignored. Big Ass Spider! demonstrates that an oversized-animal adventure need not be awful to be entertaining; it just has to be made by people who care. The mega-giant-species subgenre could use a lot more movies like it.