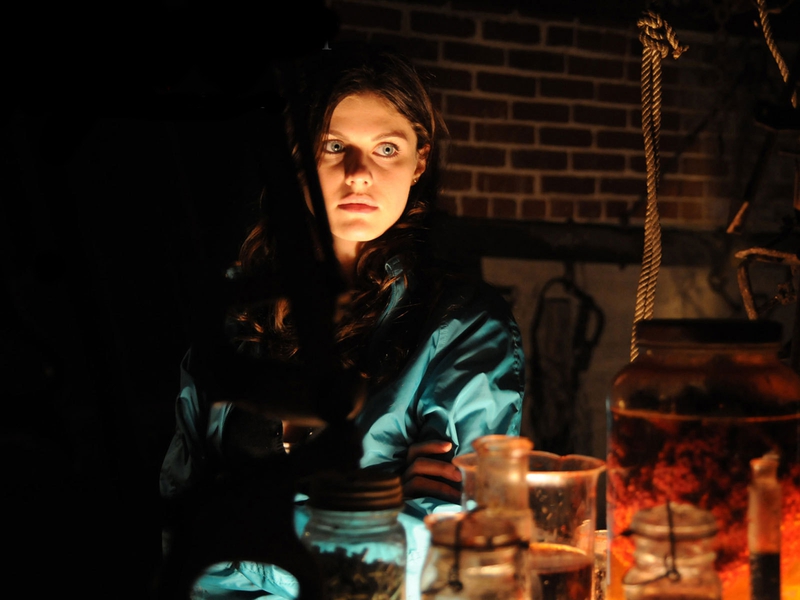 Editor's Note: This was originally published for FANGORIA on November 11, 2010, and we're proud to share it as part of The Gingold Files.

For fans of Stevan Mena’s accomplished, classical 2004 slasher opus Malevolence, his prequel Bereavement is worth the long wait. For those unfamiliar with Malevolence, you don’t need to have seen that film to appreciate this one.

What those familiar with Malevolence may not expect is how grisly the follow-up feature gets. Its production company isn’t called Crimson Films for nothing; while writer/director Mena goes for the same slow burn of tension as in his first movie, the punchlines in Bereavement are far bloodier. If Malevolence played like a salute to the shadowy suspense of John Carpenter’s Halloween, Bereavement’s excesses seem more informed by Friday the 13th, albeit with a more complex plot.

Bereavement is partially the story of Martin Bristol, the deranged villain of Malevolence whom we first meet as a young boy in 1989 Minersville, Pennsylvania. (Marco Cappetta’s cinematography on PA locations gives the movie’s events a palpable rural atmosphere that’s one of the film’s key assets.) No sooner have we learned that little Martin has a physiological disorder that makes him incapable of feeling pain than he is abducted by a local nutcase named Graham Sutter (Brett Rickaby, the jailed crazy in The Crazies). Cut to five years later, and Sutter has been raising and serving as a twisted father figure to Martin in the abandoned slaughterhouse he calls home, “teaching” the boy his practice of kidnapping, stringing up and murdering young women.

And who should come jogging along past the slaughterhouse—where she catches a glimpse of Martin peeking out a half-shattered window—but Allison (Alexandra Daddario), a 17-year-old who has recently come to stay with her uncle Jonathan (Michael Biehn), aunt Karen (Basket Case 2’s Kathryn Meisle) and their little daughter Wendy down the road. Allison’s been troubled since the deaths of her parents that led her to make the move, and acts out a bit by getting a thing going with local boy-from-the-wrong-side-of-the-tracks William (Nolan Gerard Funk). He lives in a trailer with his embittered, wheelchair-bound dad Ted (John Savage)—so you can see there’s a whole lotta family dysfunction goin’ on, and it becomes a key theme of Mena’s narrative. (Make what you will of the fact that he cast twins Peyton and Spencer List as sweet little Wendy and the damaged Martin.)

Clearly Allison is headed on a collision course with Sutter and Martin, but for a good portion of Bereavement’s running time, the two storylines run on parallel tracks that only briefly intersect. That common motif of unstable parent/child relationships helps keep the first hour from feeling like two separate movies in one, and each of the dual plots holds the attention in and of itself, thanks in no small part to the performances. Rickaby gives good crazy and Spencer List makes a strong impression as the silently suffering Martin, while Biehn brings authority and occasional sensitivity to Jonathan. Daddario, recently seen in The Lightning Thief, is quite convincing as the teen heroine, who sports remarkable cleavage for her age—which is showcased by the camera at every opportunity, though actual nudity or sex isn’t part of Mena’s package.

The filmmaker exhibits no such restraint when it comes to the violence once Allison’s curiosity about Martin gets the better of her. While the splatter doesn’t venture into over-the-top, gratuitous territory, Mena nonetheless splashes the blood around with gusto (surprisingly, there’s no credit for the key makeup FX), and even more significantly, he’s positively ruthless about dispatching his characters. A key scene about halfway through Bereavement makes it clear that no one’s safe, and the lengthy setup during which we’ve gotten to know Allison, her family and friends pays off in some seriously distressing situations when they’re imperiled later on. A couple of moments of bad judgment on Allison’s part aside, Bereavement’s climax is gripping and frightening.

The closing shots make it clear that, true to its title, Mena intends Bereavement to be a tragedy in the final analysis as well as a horror film. That he succeeds is a testament to his naturalistic and people-based approach, a refreshing alternative to the in-your-face, impersonal “style” of many other recent psycho films. Those who admired Malevolence will find their patience for this prequel rewarded (especially if they stay to the very end of the final credits), and will be anxious to see where Mena goes in the last of this planned trilogy.