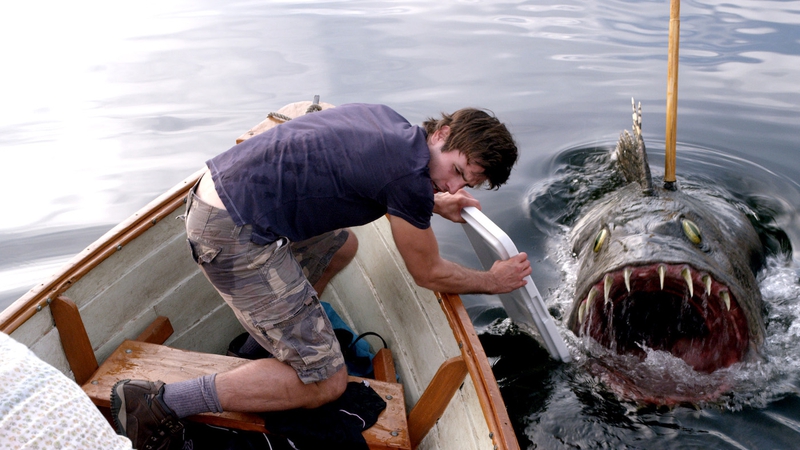 Editor's Note: This was originally published for FANGORIA on July 17, 2013, and we're proud to share it as part of The Gingold Files.

Beneath is a movie that plays best if you don’t take it too literally. That may seem an odd thing to say about a flick in which a killer fish chows down on hapless teenagers, but then most nature-amok low-budgeters aren’t directed by Larry Fessenden, who never metaphor he didn’t like.

Having previously explored various permutations of the supernatural in the thoughtful chillers Habit, Wendigo and The Last Winter, Fessenden takes a dip in made-for-cable monster-movie waters with Beneath, a Chiller TV production which is getting theatrical exposure at New York City’s IFC Center and playing other cities as well, and is also available on VOD. Though produced for the small screen, it has a polish and atmosphere that make it right at home on the big one, and the latter also serves notice from early on that there’s going to be a little more under the surface (pardon the expression) than one usually finds in this sort of flick.

An opening dream sequence establishes that apparent protagonist Johnny (Daniel Zovatto) might have some idea of what awaits him and a quintet of his recently graduated high-school friends when they travel to an isolated lake for one last get-together before going their separate ways. The group consists of four guys and two girls—never a good ratio in a scenario where relationship issues are bound to raise their ugly heads—and they all pile into an old rowboat to head across the water. When they stop halfway over so a few of them can take a dip, while Johnny tries (though not too hard) to dissuade them, a six-foot flesheating fish raises its own ugly head and tries to eat them, then goes on to thwart their attempts to paddle to safety.

It sounds like—and is—a traditional setup for a youth-in-peril film, but what makes Beneath distinctive is the way Fessenden twists Tony Daniel and Brian D. Smith’s script into a kind of horrific morality play. The way he shoots the introductory scenes, there’s a fatalistic air hanging over the trip from the very beginning, to the point where warnings by a local old-timer (played by veteran actor Mark Margolis) aren’t really necessary to let us know these kids are doomed. Nor does he attempt to build too much sympathy for them, the guys in particular, who also include entitled jock Matt (Chris Conroy) and his competitive brother Simon (Jonny Orsini), who’s got a barely disguised thing for Matt’s girlfriend Kitty (Bonnie Dennison), who’s also Johnny’s ex and once had a fling with their friend Deb (Mackenzie Rosman). The sixth member of the gang is “Zeke the geek” (Griffin Newman), an aspiring filmmaker who annoys everybody by constantly taping them on his wrist-mounted GoPro.

In lesser hands, this bunch might get obnoxious to the point of tuning out for the audience as well, but the way Fessenden plays out the scenario, it becomes a darkly comic study of people showing their worst sides under pressure, becoming as great or greater a threat to each other than the aquatic creature stalking them. They attempt to put on a civilized veneer, constantly putting life-or-death decisions to “a vote,” even though the end result is barbaric. They become so overcome with playing out the little minidramas between them that it isn’t until the end that one of them comes up with a solution to the problem that the viewer can figure out within the first 20 minutes. And hovering over it all is the question of whether Johnny set the whole trip up to maneuver at least some of his friends into danger.

Meanwhile, the fish circles, waiting for the next human snack to fall (or be tossed) into the drink. Happily eschewing current CGI trends, Fessenden elected to use a practical monster (by Fractured FX, run by Justin Raleigh and Ozzy Alvarez, who did the nifty critters for Splinter) that may not always quite convince as a living thing, but has a physical presence that makes its scenes work. The fish comes to have a symbolic presence, too, serving as a harbinger of the doom that the characters are bringing on themselves; when it gets fruitlessly speared with a piece of oar that protrudes from its back for the rest of the movie, it’s less a callback to the barrels in Jaws than a constant visual reminder that the teens can’t stop the fate that’s coming for them.

Lest it seem like I’m getting too deep about this, Beneath can also be enjoyed on simple B-movie terms, with enough fish attacks and blood (courtesy of makeup FX creator Brian Spears) to satisfy the basic jones for watching lower lifeforms attack tasty humans. It’s the (pardon the choice of words again) undercurrents Fessenden brings to the project, though, that make it stand out, along with the usual high production values of his and fellow producer Peter Phok’s Glass Eye Pix. Gordon Arkenberg’s cinematography nicely contrasts the beauty of the natural surroundings with ominous atmosphere, and Will Bates (son of Hammer Films acting legend Ralph Bates!) supplies properly edgy, off-kilter music. Beneath is the kind of movie where schlocky thrills are the bait, but it winds up giving you more to chew on.