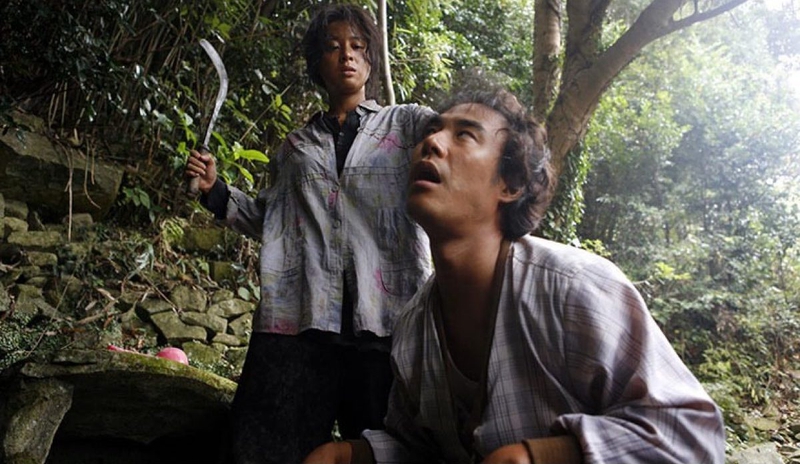 Editor's Note: This was originally published for FANGORIA on July 11, 2011, and we're proud to share it as part of The Gingold Files.

Introducing Jang Chul-soo’s Bedevilled before its first showing at the New York Asian Film Festival, co-founder Grady Hendrix promised it would offer “catharsis!” for anyone in the audience having problems with their boss, etc. That it certainly does, and in a way that genre fans will find more satisfying than, say, Horrible Bosses, though the movie ultimately tries to have its catharsis and eat it too.

Our protagonist is Hae-won (Ji Seong-won), a worker at a Seoul bank who would no doubt win the approval of David Paymer’s supervisor from Drag Me to Hell. She coldly turns down an old woman for a loan, and later refuses to help a crime victim, with Jang (working from a script by Choi Kwang-young) quickly and establishing her attitude as a product of big-city life. An incident at work leads her boss to “suggest” a week’s vacation, and Hae-won decides to take it on Moo-do Island, a remote place where she once spent part of her youth, and where she has inherited a house from her grandfather.

The setup, and Kim Gi-tae’s evocative cinematography, might suggest that the island is a bucolic getaway from the soul-sapping pressures of the city—but that idea is dashed pretty quickly. Upon arriving, Hae-won is reunited with her childhood friend Bok-nam (Seo Yeong-hie), who’s been dutifully taking care of that house—since Hae-won seems to be the only person on the island who has ever treated her kindly. Bok-nam’s husband, Man-jong (Park Jeong-hak), is a sexist brute who heaps physical and emotional abuse on her—behavior not only condoned but encouraged by the old women who make up the majority of the island’s tiny population. Along with Man-jong’s equally awful brother, they make Bok-nam’s existence hell, and the only light in her life is her young daughter Yeon-hee (Lee Ji-eun), whom she dreams of taking off the island to escape their torment.

Bedevilled’s focus soon shifts off of Hae-won to settle on Bok-nam and her awful situation, and while the bulk of the film can’t be called horror in the traditional sense of the genre, it does become grueling to watch, generating a growing feeling of outrage in the viewer. Seo, who can also be seen at the Asian Fest in Na Hong-jin’s standout The Chaser as the victimized hooker (someone give this woman a lighthearted comedy role next!), plays the victim heartbreakingly well, as she, Jang and Choi make it clear that there’s no easy way out of her situation, and that she has no choice but to endure her hardships. That helps the audience easily come by their sympathies for her, since we don’t develop them through Hae-won’s eyes; just as she did on the mainland, Hae-won chooses to turn away from the horrible deeds she witnesses.

Something, of course, eventually has to give, and when the mistreatment of Bok-nam boils over into an irrevocable and unforgivable act of violence, the breaking point is reached and the bladed tools come out. As they find their way into heads, necks and bodies, Bedevilled becomes an unrepentant gorefest that pays off the tension that the previous hour-plus has built up. Catharsis is indeed achieved, and regardless of your feelings about eye-for-an-eye justice, it’s hard not to feel a sense of satisfaction as the villains become victims. Yet the filmmakers also maintain a sense of tragedy behind the bloodshed, which adds some depth to the scenes of carnage; even as you cheer the deserved moments of retribution, you also get an underlying sense of horror that things have come to this. It’s a nice balancing act that Jang achieves even as he’s streaking the screen with squeam-inducing gore.

Which is why it’s so disappointing when, in the final act, Bedevilled goes so wrongheaded. There’s a scene—a shot, really—that wraps up the story with the perfect mix of resolution and ambiguity…and then the movie continues into a lengthy setpiece that’s so wildly out of character from what has come before, it feels like it has to be eventually revealed as a dream—and even then would feel like a betrayal of the film’s tone and intentions. It sends Bedevilled plunging from emotional character study to schlock horror, and here, and in a few brief scenes that follow, Jang and Choi seem to have forgotten what kind of movie they’re making and whose story they’re telling. It’s a relief when they ultimately arrive at one last revelation that gets things back on track and sounds a proper note of melancholy, though it’s a shame its effect is muted by the misguided material that precedes it. Bedevilled still warrants a strong recommendation for fans with strong constitutions, even though, like many Korean thrillers, it’s about 15 minutes too long—and it has never been clearer in a Korean thriller which 15 minutes need to come out.