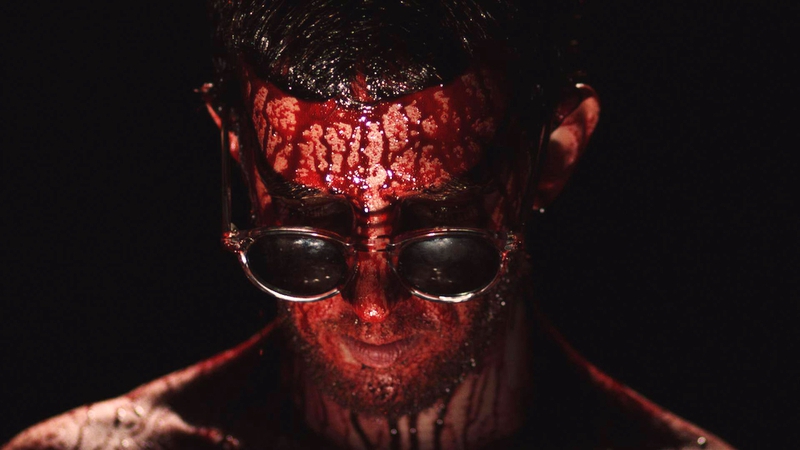 Editor's Note: This was originally published for FANGORIA on July 24, 2014, and we're proud to share it as part of The Gingold Files.

New York City may be a cleaner, safer place than it was in the late ’70s and early ’80s, but that hasn’t stopped the makers of Bag Boy Lover Boy from successfully updating such grimy fare from that era as Maniac and Driller Killer, with an added dark-satirical spin.

In the less threatening environment of Bag Boy Lover Boy (a world premiere at Montreal’s Fantasia festival), the less threatening central character—at least for a while—is sort of an anti-Joe Spinell or Abel Ferrara. Albert (Jon Wachter) is a slow-witted hot dog vendor with a weak chin and a voice like a European Muppet, living in a rundown Queens apartment. Working his cart on the Lower East Side brings Albert into contact with assorted odd New York types, and one night, an amusing confrontation with a couple of drunk customers introduces him to Ivan (Theodore Bouloukos), a SoHo photographer who specializes in demeaning fetishistic scenarios.

Somehow, he decides that Albert would be perfect to pose opposite a series of sexy girls wearing pig masks or plastic bags over their heads. Albert proves surprisingly unenthusiastic about being placed within touching distance of models similar to the porn stars whose pictures adorn his wall at home, but he’s convinced to take part by Ivan’s promises to teach him the art of photography—which he believes will score him points with pretty regular customer Lexy (Adrienne Gori). The opening half of Bag Boy Lover Boy is an acerbic takedown of the downtown New York art scene, as Ivan spouts off about Art in between snapping his sleazy stills, featuring models reduced to dehumanizing themselves for the money he offers.

Throughout it all, Albert’s blasé demeanor—he can barely be inspired to raise his voice even when protesting his deal with Ivan—builds a quiet tension under his scenes: Surely this guy can’t be as mild-mannered as he appears. Wachter, who has never acted in a feature before, inhabits the part so fully and guilelessly that one wonders if he’s playing himself to an extent (though the Q&A he took part in after the Fantasia screening made it evident he’s not). Together with director Andres Torres—also a feature first-timer, who scripted with Toni Comas—Wachter creates a portrait of a marginalized young man who seems destined to meander through life being either ignored or exploited…until he snaps.

And even then, he doesn’t snap, exactly. Bag Boy Lover Boy’s eventual crossover into horror territory isn’t signaled by a sudden explosion of violence, but instead grows unemphatically out of the behaviors of its key characters. Albert seems to make his shift to the dark side almost by accident, and the casual manner in which he indulges in unspeakable acts makes them all the more disturbing. After a certain point, he seems capable of anything, and thus so does the movie, though it settles into familiar if still suspenseful rhythms for the final act.

While sporting a determinedly independent spirit and veneer, Bag Boy Lover Boy is well-crafted for its low budget. Torres and his team may be exploring the rotted portions that still exist within the Big Apple, but they demonstrate a keen sense of how to capture the city’s seedy side without their own product appearing degraded. The you-are-there cinematography by Ana Franquesa Solano and the naturalistic performances, with Kathy Biehl also making a strong impression as Ivan’s seen-it-all makeup artist, combine to lend Bag Boy something of a documentary-style quality—even as it showcases a side of the city that’s less pronounced than back in the days when Spinell and Ferrara prowled its streets.