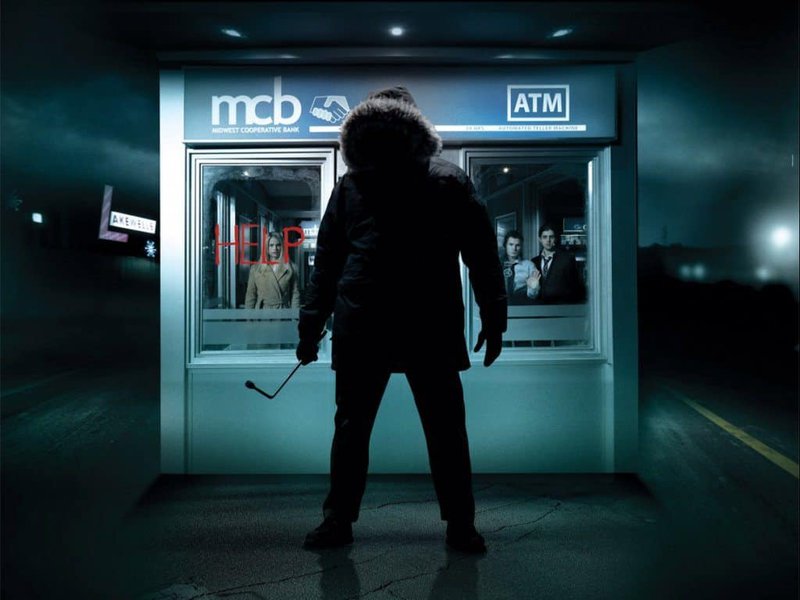 Editor's Note: This was originally published for FANGORIA on April 5, 2012, and we're proud to share it as part of The Gingold Files.

If you sit through all the end credits of ATM, you’ll be treated to a series of intercut montages showcasing the graphic handiwork of its villain: an impressively detailed series of blueprints, overhead photos, layout plans and other visual implements of his devious plot. Someone clearly went to a lot of trouble putting these props together, and it’s a shame a similar amount of care wasn’t lavished on the scenario preceding them.

ATM was written by Chris Sparling, who scripted the knockout Ryan-Reynolds-in-a-coffin thriller Buried and was clearly inspired to explore further enclosed spaces that frightened characters could be trapped inside. As opposed to Reynolds’ working-class grunt, the hero here is investment advisor David (Brian Geraghty), who pines for pretty, soon-to-depart co-worker Emily (Alice Eve) and is encouraged to make a play for her at the office Christmas party by snarky pal Corey (Josh Peck). When David discovers Emily without a ride home through the freezing night, he seizes his chance and offers her a lift.

Then, having practically bullied David into making a move, Corey pulls a serious cockblock and insists on hitching a ride with them. Then he insists that he’s hungry and wants to get some pizza immediately. Then he realizes he has no money and insists they stop at an ATM. Indeed, he does so much to maneuver them into the perilous place they find themselves, it almost seems like he’s in on it. (SPOILER ALERT: He isn’t, though that might have made the proceedings more interesting.)

The cash machine they arrive at is one of those separately glass-enclosed types, located in the middle of a vast, deserted shopping-center parking lot. For reasons impossible to fathom besides plot convenience, and despite the bone-chilling cold outside, our trio decide to park about 100 feet away from it, and once they’ve ventured inside, they become trapped by the presence of a mysterious, lurking figure outside, dressed in a hooded parka that hides his features and makes him resemble the slasher from Urban Legend. While he doesn’t brandish any weapons, he’s clearly a deadly threat—and it’s plausibility that gets killed first.

Time and time again, David, Emily and Corey make illogical decisions and ignore obvious choices and opportunities to get away. We’re told repeatedly how isolated and thus vulnerable they are, and yet bit players keep showing up to provide Mr. Parka a chance to get his murder on. One character says he doesn’t have an item that could help them out of their scrape, but later it turns out he does have one, and his reluctance to say so makes no sense. Neither do the villain’s actions, for that matter; rather than simply break the glass and take them out, or torment them in any interesting ways, he spends a lot of time puttering around the back of the ATM, perhaps secure in the knowledge that his victims won’t figure out that they can flee out the front while he’s thus distracted.

Debuting feature director David Brooks does a decent job navigating the spatial restrictions of his setting, but he can’t do much to improve a scenario with such unobservant protagonists. Despite the fact that the three have a clear view of the parking lot surrounding them, they’re repeatedly surprised by situations they should have been able to easily see developing. This could be because instead of keeping an eye out, they spend a lot of the time pointlessly bickering and hurling accusations of responsibility at each other. (Remember the ATM in Maximum Overdrive that called Stephen King an asshole? It would have a field day with this bunch.) One mid-film development attempts to insert a moral conundrum about killing into the story, but it comes about so unbelievably that it has no weight.

ATM also teases us with the question of just what the killer wants and why he’s chosen this particular venue—but never gives it up. All those diagrams and charts flashed during the end credits make you think you’re going to get some kind of satisfaction at the very end, and then…nothing. At one point during their ordeal, Corey suggests that their attacker might be a client who lost most of his 401(k) because of David’s poor investments. If that’s the case, then given his evident skill with surveillance, this guy is clearly ignoring a more potentially lucrative career. Has he checked if the FBI is hiring?