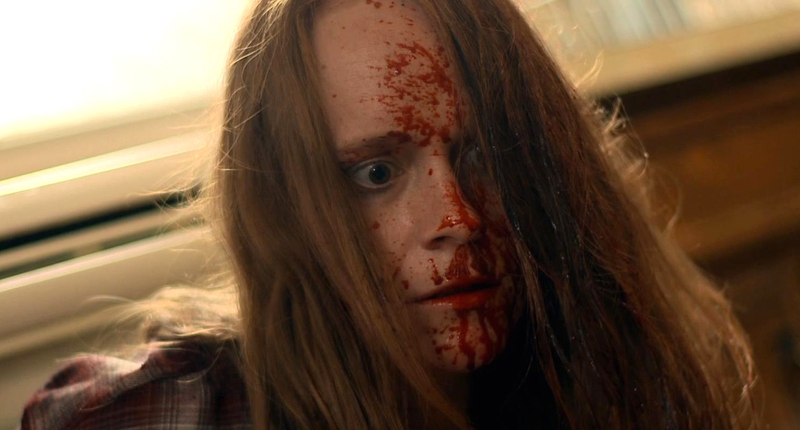 Editor's Note: This was originally published for FANGORIA on July 18, 2014, and we're proud to share it as part of The Gingold Files.

Animosity opens with a scene of the type we’ve seen before in many a horror film. Then, as it closes in on its punchline, one character says a simple line that gives the situation a new dimension—a signal of how the whole movie will upset and confound expectations.

Making its international premiere at Montreal’s Fantasia festival ahead of its DVD release by Bloody Earth Films, Animosity is unusually complex and ambitious for a homegrown horror feature—one actually made as a School of Visual Arts thesis film by writer/director Brendan Steere (with SVA professor and Street Trash veteran Roy Frumkes as an executive producer). If it eventually bites off more than it can chew, it deserves credit for having that big an appetite in the first place. The movie’s heroine is Carrie (Tracy Willet), who moves with her husband Mike (Marcin Paluch) into a new home in the middle of rural nowhere. Carrie’s a composer of horror-film music (we get a glimpse of the Gothic-cheesy flick she’s scoring, featuring “naked zombie chicks,” which may be a bit of a riposte to the kind of genre movies often made on this budget), and considering that there’s no cell service and the land line and computer haven’t been hooked up yet, it’s not a surprise when life begins imitating that “art.”

First she encounters Tom (Stephan Goldbach), a local hunter who likes to discharge his shotgun in her backyard. Then a bloodied young man (Rob O’Rourke) turns up in the house in the middle of the night, and mysteriously seems to recognize her. Carrie is understandably perturbed about all this, but even after Tom directly threatens her, Mike remains blasé about the situation, thinking she’s been working too hard. It isn’t long before her fears start to become justified, as those characters make repeat visits that take ever more distressing turns. Many indie horror movies tread water for the first half getting to the good stuff; in Animosity, you’re at the 40-minute mark before you know it, and even better, you have no idea where the story is headed.

Where it goes is into twisty territory in which Carrie discovers that everyone around her seems to have an ulterior motive, and there may be multiple realities and identities in play. Eschewing a surreal approach, Steere grounds the movie by sticking close to Carrie throughout, and Willet rewards the attention with a performance that’s by turns vulnerable, panicked, determined and fierce, making the most of a well-scripted, well-developed role. The supporting characters go through a few changes of their own, and those actors do a nice job maintaining credibility as they reveal their true, sometimes sinister colors.

Steere winds up blending together a few different flavors of horror here—to reveal any other than the terror-at-an-isolated-house subgenre would be a spoiler—and combines psychological trauma with dollops of well-executed gore. He’s determined to keep surprising you right up to the end, and occasionally the narrative gets away from him. There are points where Animosity becomes hard to follow, and a little streamlining might actually have been welcome. Still, Steere stages the mayhem and confrontations well and never loses his control of the film’s mood; he and cinematographer Jesse Gouldsbury make fine use of the woodsy locations, and the director honors his heroine by backing her with a pretty eerie score by Geoff Gersh. As a calling card and a film in and of itself, this ought to inspire not Animosity but enthusiasm.