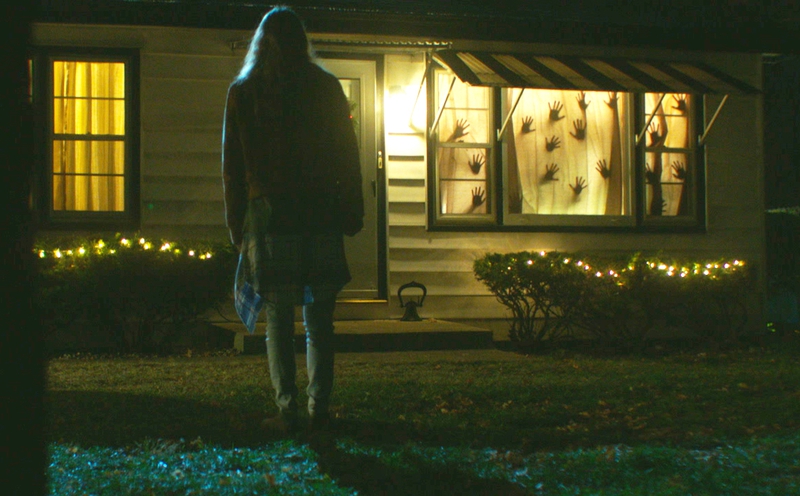 Editor's Note: This was originally published for FANGORIA on July 24, 2015, and we're proud to share it as part of The Gingold Files.

No relation to Spanish director Bigas Luna’s cult favorite, Anguish is the creepiest and most resonant American independent horror film since It Follows, showcasing a breakout performance by young actress Ryan Simpkins.

Anguish (a world premiere at the current Fantasia festival in Montreal) bears a few tonal similarities to David Robert Mitchell’s breakout hit, while putting the focus on family bonds under pressure as opposed to peer relationships. Teenaged Tess (Simpkins) has been suffering from anxiety ever since her mother Jessica (Annika Marks) discovered her banging her head against the wall when she was a child. Tess has been on a steady diet of medication ever since, though her condition is not necessarily psychological, as becomes clear when she and Jessica move to a small-town house, and Tess begins experiencing hallucinations suggesting she’s susceptible to the spirits of the deceased.

The early sequences of Tess wandering and exploring her new suburban environment establish an atmosphere and sense of place uncommon in typical teen chillers. Writer/director Sonny Mallhi, making his debut at the helm after producing the likes of The Strangers and At the Devil’s Door, builds a quietly ominous mood, adding evocative grace notes like a nicely off-kilter bit involving a boy trying to get Tess’ attention on the street. Another teen soon begins distracting Tess in more unnervingly direct ways: Lucy (Amberley Gridley), who was killed in a horrible accident some time before, and whose spirit lingers on and begins plaguing Tess. At first, of course, Jessica believes her daughter’s medical condition is just getting worse, before it becomes clear that a priest might offer more help than a doctor.

Don’t confuse Anguish for a garden-variety possession saga, though; it’s one of the rare examples of the subgenre emphasizing the humanity of the ghost creeping into the heroine’s body and soul. Lucy’s grieving mother Sarah (Karina Logue)—the sort of character who’s usually secondary in such stories—becomes crucial to the drama in the movie’s second half, which eschews special-FX theatrics and goes to powerful emotional places instead, coaxing us to fear for the characters in more profound ways. Mallhi may throw a jump-scare or two too many into the early going, but the way in which he otherwise gradually eases both his protagonists and the audience into accepting the supernatural pays off; we believe in Jessica and Sarah’s distress, and can share in it.

Most of all, we believe in Tess’ trauma, terror and struggle to deal with what’s happening inside her own mind. Simpkins, who made a strong impression as a preteen in Jennifer Lynch’s Surveillance, brings depth and sympathy to Tess from her first moments on screen, and navigates her journey into seriously dark places with unerring, unemphatic skill that grabs us and keeps us concerned for her throughout. Gridley is fine, too, in her portrayal of a spirit with a more profound purpose than simply freaking out the living.

That’s a good way to describe Mallhi’s goals and achievement with Anguish as well. While hitting the jittery and eerie beats one looks for in a ghost story, he provides a backbone of human feeling that connects us to his pair of daughters and mothers, as each of the latter tries to hang onto her child. Mallhi’s spooky touches are balanced by telling details—like a brief shot revealing that Tess’ largely absent father, a soldier whom she usually sees only via Skype, is a skateboarder like she is. A closing title card tells us that the movie was inspired by true events, but that’s a superfluous gesture, as Anguish has already evoked real life—to its great and frightening benefit—more than the large majority of films of its type.