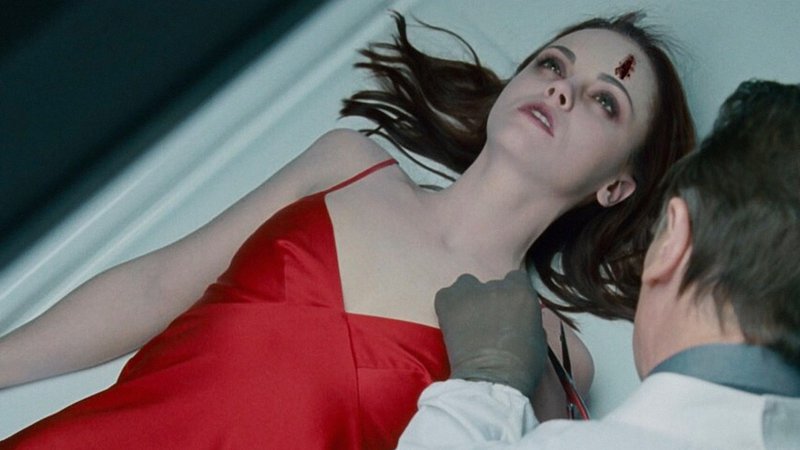 Editor's Note: This was originally published for FANGORIA on April 9, 2010, and we're proud to share it as part of The Gingold Files.

If you’ve ever wondered what a SAW film would look like if Jigsaw were more contemplative than bloodthirsty, you’ll definitely want to check out After.Life, in which Liam Neeson plays a mortician who can speak to the dead, and lecture them about how they never used their time on this Earth to truly live. Or can he?

That’s the question at the crux of Agnieszka Wojtowicz-Vosloo’s feature directorial debut, of which Neeson’s eerie-calm performance is the best part. He plays Eliot Deacon, operator of a suburban funeral home where young teacher Anna Taylor (Christina Ricci) comes across his slab after perishing in a car crash. Ricci plays dead convincingly, but not for long; soon, she has woken up wondering what she’s doing there. She believes she’s not actually deceased, and that Eliot is keeping her a prisoner in his cold, sterile prep room. Eliot assures her she has passed on, and that she’s experiencing a purgatory state in which she must accept her fate and move on to the next world.

Another person who refuses to accept that Anna is dead is her boyfriend Paul (Justin Long), who might just also be experiencing a touch of guilt, since Anna was fleeing their argument in a restaurant when she got into her accident. He gets no sympathy from Anna’s cold, domineering mother Beatrice (Celia Weston), but Jack (Chandler Canterbury), one of Anna’s grade-school students, might hold some of the answers regarding her situation, since he’s taken an interest in Eliot’s activities that could be seen as rather unhealthy. Meanwhile, back in the mortuary, Anna makes vain attempts to escape her confinement, while Eliot calmly lectures her about how she shouldn’t be so reluctant to embrace death, since, in his estimation, she was always afraid to truly experience life.

So…is Eliot some kind of moral gatekeeper between the two realms, helping or cajoling souls into taking that final trip? Or is he a judgmental madman who uses drugs to put his victims in temporary physical deathlike states, preparing to deliver them to horrifying fates? It could have been an intriguing mystery, but intentionally or not, the script by Wojtowicz-Vosloo, Paul Vosloo and Jakub Korolczuk, and the director’s presentation of it, stacks the deck. All the subjective evidence we see points to one explanation, and the only thing backing up the other is the word of one character who’s decidedly unreliable. More exploration of how Anna wasted her one shot at life as she tries desperately to get another might have provided a second, compelling focus, but this doesn’t get explored to any significant extent until well into the movie’s second half.

To the extent that After.Life manages to hold the attention nonetheless, it does so due to Wojtowicz-Vosloo’s precise visual filmmaking and the performances of the two leads. Though Anna’s specific problems are more given lip service than dramatized, Ricci embodies her in compelling fashion—and sometimes literally, in long later stretches where she plays her part completely nude, and completely without self-consciousness. Neeson deftly avoids any potential temptation to tip his performance one way or the other regarding his enigmatic role, underplaying and creating in Eliot a composed obsessive who’s thoroughly plausible in either case. (Conversely, Long embraces the opportunity to stretch from his typical comic roles into more dramatic territory a little too enthusiastically, practically frothing at the mouth at certain moments in his quest to convince others that Anna is in danger.)

In concert with cinematographer Anastos N. Michos, production designer Ford Wheeler and costumer Luca Mosca, Wojtowicz-Vosloo immerses the principals in evocative environments, particularly Eliot’s inner sanctum, which is coldly beautiful, unnervingly forbidding and convincingly utilitarian all at once. Throughout, the director and co. make sparing, specific use of the color red, from the dye job Anna gets shortly before she perishes to the dress she wears for part of her time in Eliot’s lair.

What’s not on view, in terms of crimson content, is much blood. Wojtowicz-Vosloo is out to scare you in more subtle yet still visceral ways, particularly in her presentation of the details involved in preparing a corpse for its final interment; those viewers with strong intimations of mortality will likely experience extreme discomfort. She wants to get under your skin while making you think about the bigger life-and-death picture at the same time (though she’s not above the occasional easy jolt or loud music stinger), and clearly has ambitions beyond your typical simplistic horror fare. If her own material in After.Life somewhat fails her, it still demonstrates sufficient promise to make her next feature worth anticipating.