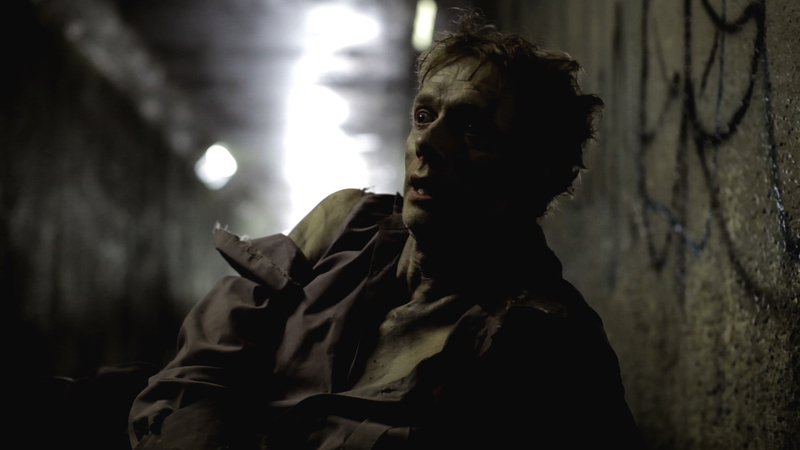 Editor's Note: This was originally published for FANGORIA on July 28, 2011, and we're proud to share it as part of The Gingold Files.

Montreal’s Fantasia festival is well-known as a showcase for the most out-there fare the various genres have to offer, but if there’s been a trend at this year’s edition, it’s the preponderance of independent horror films that are lower-key character studies first and foremost. Absentia is just such a movie.

Joining such previously screened entries as Midnight Son, The Corridor and Some Guy Who Kills People, Absentia delves into the souls of its protagonists, only to eventually shatter them. Writer/director Mike Flanagan, making his feature debut, succinctly sets up his protagonist and backstory with just a few images of Tricia (Courtney Bell) replacing old, tattered missing-persons flyers with new ones around her California neighborhood. The vanished individual is her husband Daniel, who disappeared seven years prior—enough time that she’s about to have him legally declared dead “in absentia.” Just as Tricia is officially acknowledging a loss in her life (and preparing to welcome a new one; she’s very visibly pregnant), another person who’s been gone from it a while turns back up: her sister Callie (Katie Parker), who has just wrapped up a cross-country tour of rehab centers.

There’s plenty of baggage between the two grown siblings, and Flanagan teases it out gradually and subtly through telling lines and reactions, making the exposition natural and unforced. The result is that Absentia passes one of the tests of a good horror film: take the genre elements out, and you’ll still have a compelling story. As it turns out, the writer/director has a knack for the scary stuff too, as Daniel (Morgan Peter Brown), looking rather the worse for wear, starts turning up before Tricia’s frightened eyes, and delivers at least one serious jolt to the audience too. Is Tricia having these visions due to grief over Daniel’s loss and guilt about figuratively laying him to rest, as her psychiatrist suggests, or is she being literally haunted by Daniel’s spirit? Or is something different but equally fearsome going on?

Flanagan handles this question as deftly as he does the dynamics between Tricia and Callie, and resolves it in a wonderfully handled scene in which what first appears to be supernatural is revealed to be natural. This revelation throws the whole story into new relief, and occasions a fresh new series of dramatic developments and decisions. While he doesn’t wallow unnecessarily in his principals’ pain or grief, Flanagan doesn’t shy away from the uncomfortable moments between them; at moments when another filmmaker might cut away from the emotional fallout, he sticks with it. He also maintains a sense of mystery as to what’s going on; we know it has something to do with a long tunnel to a park down the street from Tricia’s place, but the truth remains tantalizingly enigmatic for a good part of the running time.

Providing one clue is a brief appearance by Guillermo del Toro favorite Doug Jones, the most familiar name among the small cast (also including Dave Levine as a detective with a special interest in Tricia and Daniel’s case). Everybody involved gives naturalistic performances (Bell and Parker’s sisterly relationship feels fully lived-in, loving yet contentious) that gibes nicely with Flanagan’s approach, which doesn’t go for big game-changing scenes but instead drops hints and leaves it to the audience to understand what’s going on. There are places where he could have been more explicit with his horrors (though he does go for the gore at least once), but he instead aims for quiet chills, and pulls them off with panache. Impressively marshalling his low budget, with strong assist from cinematographer Rustin Cerveny and composer Ryan David Leack, Flanagan assures that suspense and deep chills aren’t absent from Absentia.