Review: A NIGHT OF NIGHTMARES 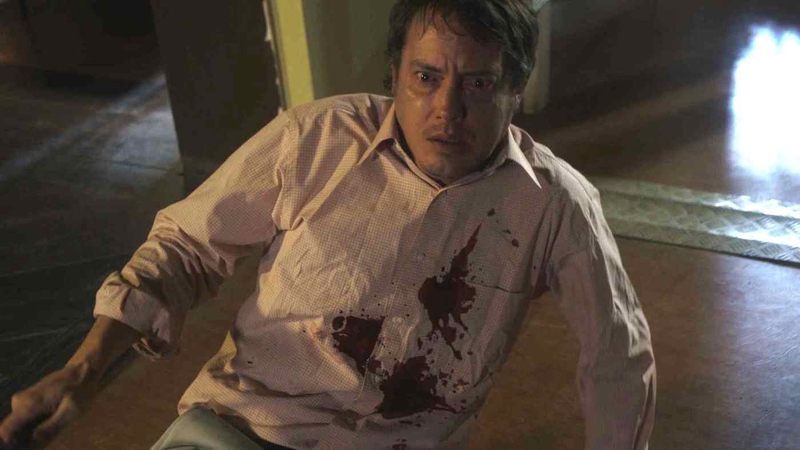 Editor's Note: This was originally published for FANGORIA on August 1, 2012, and we're proud to share it as part of The Gingold Files.

A Night of Nightmares sounds like a rather generic title for a movie coming from confrontational director Buddy Giovinazzo, the man behind Combat Shock and the I Love You episode of The Theatre Bizarre. But while this film (originally known as Ginger) isn’t as graphically intense as Giovinazzo’s past work, it’s a lot more distinctive than the general run of indie horror fare.

For one thing, A Night of Nightmares (which world-premiered at the current Fantasia festival) casts Marc Senter, who made such powerful impressions as the antagonists of The Lost and Red White & Blue, as a nice guy. He’s Mark Lighthouse, a music enthusiast seeking out new acts to cover in his blog, who is excited about his impending meeting with Ginger (Elissa Dowling), a pretty, eccentric young singer currently renting a remote house in the California mountains. She has invited him to meet up at her place, and Mark arrives full of anticipation for the interview—and maybe a little more. But he plays the gentleman as they chat and get to know each other, and the two actors share an easy chemistry that quickly gets the audience on their side. And neither succumbs to romcom blandness: Mark has a touch of the wiseguy to him and Ginger clearly has a few issues to deal with; after all, why else would she be holing up in the middle of nowhere?

One reason becomes clear at the end of the film’s first act, as an unexpected visitor spoils Mark and Ginger’s burgeoning romance. The ensuing confrontation quickly ratchets up the tension while also serving as a canny red herring in Giovinazzo and Greg Chandler’s screenplay; there’s another force or presence lurking around this house, and the story proceeds with a series of teasing hints as to just what it is. The result is that A Night of Nightmares becomes a different kind of haunted-house movie, diverging from the usual Gothic or expansive location to center the terror within Ginger’s banal little one-story. Giovinazzo serves up some of the usual conventions to keep Mark and Ginger stranded there—it’s too far to walk to the nearest town, there’s no cell-phone reception—while tweaking them in amusing and shivery ways: the couple discover an old phone connected to a land line, but it proves to be no help when they call both the cops and the house’s owner (voiced by veteran actor Richard Portnow), who with one profane line of dialogue sends the story spinning into a new direction.

Giovinazzo’s past films (also including the urban-squalor drama Life Is Hot in Cracktown) have focused on psychologically troubled individuals whose internal damage leads to external violence. In A Night of Nightmares, a few traumatic secrets from Ginger’s past notwithstanding, the horror comes from without, and Giovinazzo goes more for funhouse jolts and anticipation than deep-seated disturbance. He’s pretty good at it, too, delivering several moments that’ll make you yelp, jump or cringe in your seat, throwing in nasty surprises, nicely timed setups and payoffs and touches of black humor along the way, and his direct, unfussy style pays the same dividends here that it did in his past, bleaker work. His low budget may have eschewed the use of CGI or other visual FX common to even small-scale supernatural pictures these days, but then, he demonstrates here that he doesn’t need them when the right edit or sound effect will get the point across just as effectively.

The real secret of A Night of Nightmares’ success, though, is its pair of personable, idiosyncratic protagonists. Mark and Ginger are believable both as a potential couple and as they physically struggle with, and try to think their way out of, their horrific situation, and the fact that we want them to get together even before the haunting starts makes us want that much more for them to overcome it. So many supernatural chillers inflict their paranormal phenomena on characters who seem to have never seen one of these films themselves that the way Mark and Ginger try to rationalize and outwit the threats almost feels like a commentary on them. But A Night of Nightmares isn’t meta; it’s just smarter than your average screen spook show, and more fun too.