From IT to CLOWN IN A CORNFIELD, exploring the horrors of false faced facades. 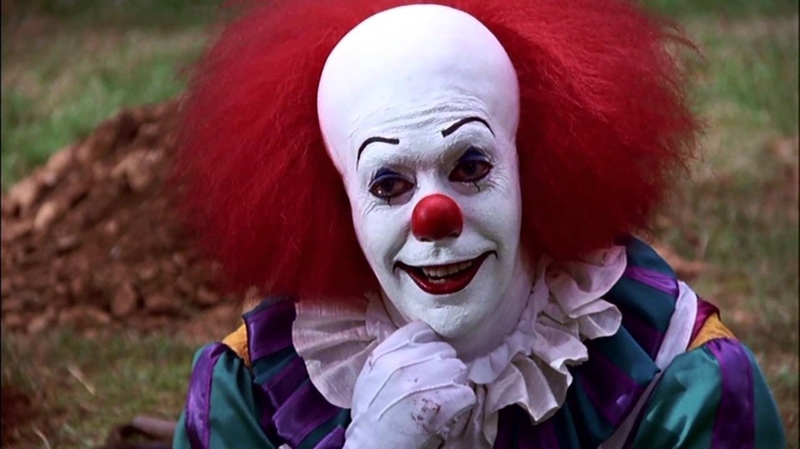 He's just here to bring you joy and laughter.

Let me paint you a picture of simpler times of widespread fear. It's 2016, and any time you open social media or turn on the news, you hear another story about it. A story that invoked fear across the planet for a few months. Stories of clown sightings started in Green Bay, Wisconsin but quickly appeared across the globe. Clowns watching from every corner, or so it was reported. In cornfields, in graveyards, and anywhere you wouldn't want to see a lone clown lingering. It got so bad that even McDonald's retired Ronald McDonald from their advertising campaigns. How bad do things have to get when McDonald's has to make a change? The sightings stopped, and the world, unfortunately, moved on. But the fear is still there. The usage of clown imagery in horror has kept the killer clown trope alive and well. But what makes people fear clowns?

Clowns date back to the Fifth Dynasty of Egypt, but the modern iteration and ideology is most closely associated with that of the circus clown. White grease paint, red nose, and bushy red hair are the typical attire of something that strikes fear into the hearts of so many. But that combination wouldn't strike fear unless it found its roots in something real or deeper. What real-life events inspired the larger spread fear of the red-nosed clown?

The fear of clowns is most often cited for springing up from the serial killer John Wayne Gacy Jr. Gacy had two clown identities, with the most notable being Pogo the Clown. While the murderer inspired one of the most well-known clown horror icons, Pennywise, the antagonist from Stephen King's It, it's not the only root for fear. The use of the clown as a horror thematic device can find its roots in a number of places. 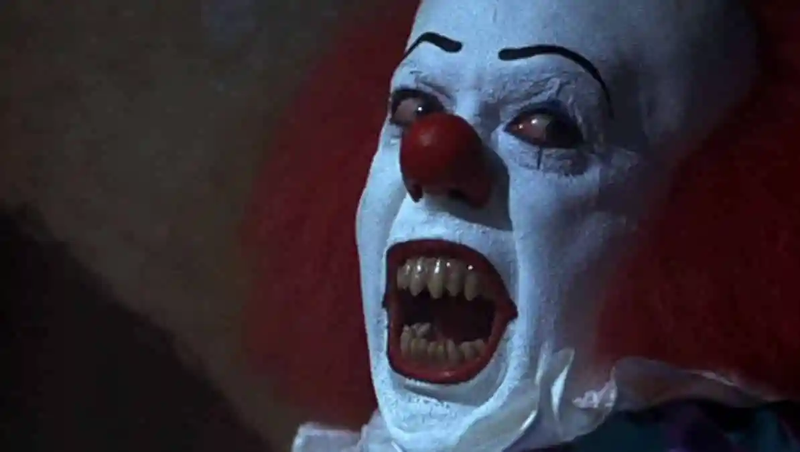 Horror finds a lot of its power in the unknown, which makes clowns a perfect vehicle to drive home fear. Clowns wear a false face over their own. Whether it be a physical mask or thick grease paint, what you see isn't the genuine article. Many clown designs include exaggerated features like eyes and smiles. They paint a picture of something that should be friendly and welcoming. Horror often takes that to paint a very different reality.

It's Pennywise is a prime example of the use of the false face. The clown itself is an embodiment of the children of Derry's fear. While it has the look and shape of a human, it's anything but. The horror of the situation derives from what's beneath the surface, unseen. It's one of the easiest examples of the clown as a narrative device. An extremely exaggerated version of what you expect a thing to be, with something horrifying just below the thick grease paint. 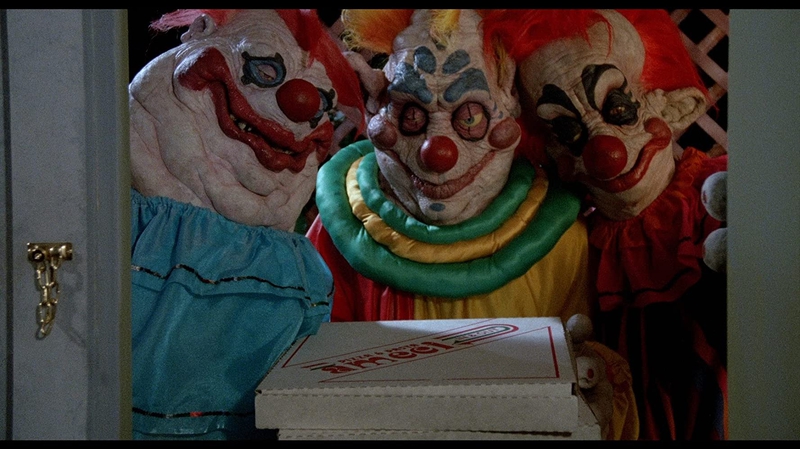 One of the primary expectations of a clown is that they are the fool. They are a joke to be ridiculed as they get a pie to the face or, in the rodeo clown's case, chased by a bull. Their profession is to be an embodiment of the lesser. But what happens when that clown isn't something to be laughed at? There are many notable uses of the clown that breaks bad such as DC Comics' Joker. One of the best subversions of the clown figure as a fool is in Killer Klowns From Outer Space.

The title basically tells you everything you need to know, the Killer Klowns come from outer space and begin to decimate a town. Many townspeople don't take it seriously because they view the clowns as a joke. The fear comes from having those expectations warped once. The clowns begin using their whimsical weaponry to cocoon townspeople in cotton candy or outright kill them. While the film is very campy, it derives its fear from the clown by taking those expectations of something silly and making it lethal. 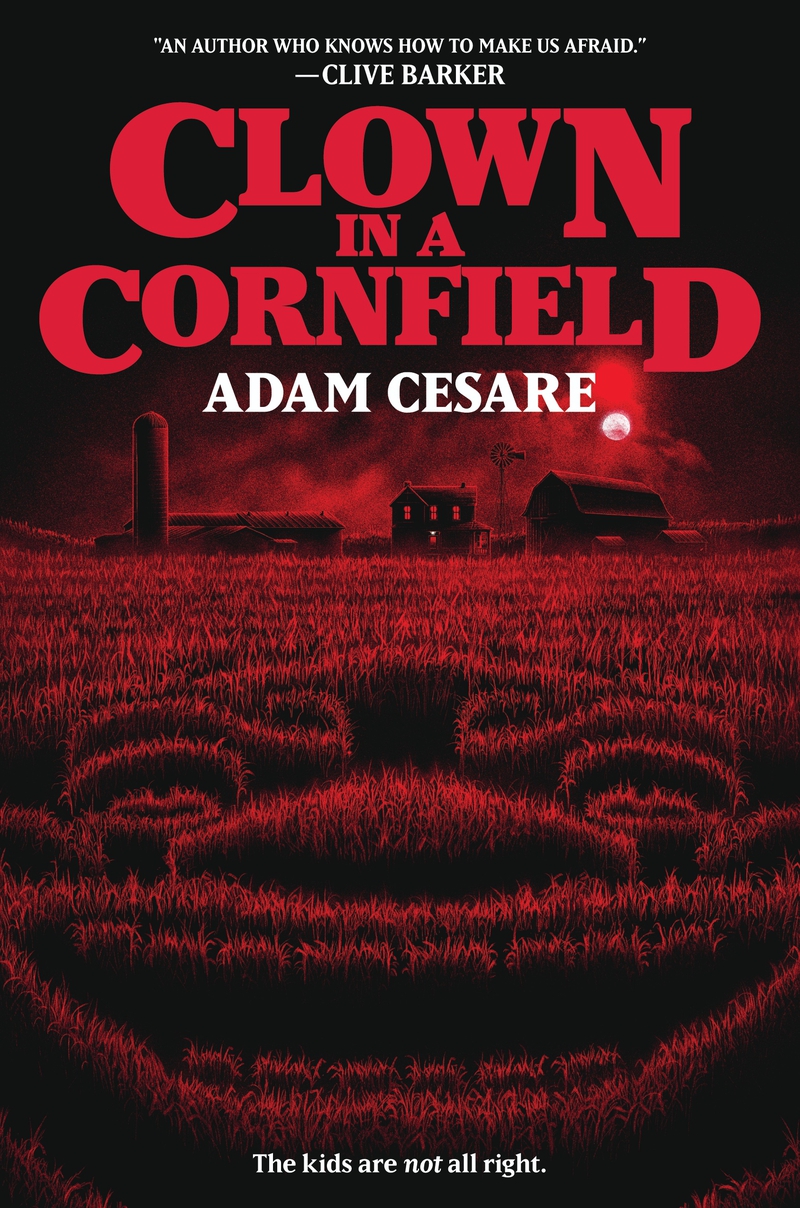 Most people have been to a birthday party, a fair, or other events where a clown was present. It's a career meant to bring joy to those around the performer. Be it from balloon animals or face painting, without any extra dressings, clowns aren't inherently evil nor something to be feared. McDonald's has sold billions of pounds of processed meat by using a clown mascot. Clowns can serve as a reminder of innocence and of better times. A writer or director can warp those feelings into fear. In the recent best-selling novel Clown In A Cornfield, the clown readers are meant to fear is actually the town's factory mascot. The days of prosperity are long gone in the story, so the iconography is a reminder of a better time. Clowns symbolize the loss of innocence, which so many fear in their own lives.

In reality, being a clown is a silly (not scary) profession that requires clown hopefuls to paint an egg to trademark their signature makeup. But as a narrative device for horror, it's an extremely flexible and useful tool to tell a story that will stick around far after the smile fades from view. They're visually striking, and they can stand for so many things. It's why the fear of clowns unifies so many people. We can only hope that another clown epidemic begins in 2023 to unite people with the great equalizer of horror.