A retrospective with the cast and crew of RAMPAGE. 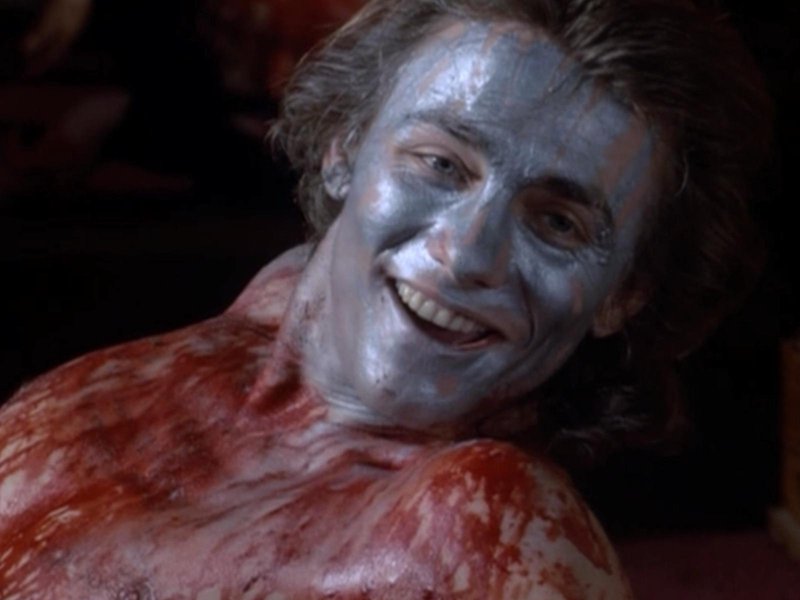 "In Modern America, The Boy Next Door Isn't What He Appears To Be."

On Christmas Day, boyish faced Charles Reece wanders through a tree-lined suburban street, past The Nativity scene on someone's lawn and houses dressed up with paper Santa and snowmen for a California Christmas. Before we see the terrible reason he's in the neighborhood, we see the words "This film is inspired by true events."

Seeing a woman enter her house with groceries, Reece calmly goes to her door, rings the bell and begins brutally killing her entire family, saving the woman for his worst crimes.

Welcome to William Friedkin's Rampage, a very scary – and criminally overlooked – horror classic. While many know Oscar-winning filmmaker Friedkin as the director of The Exorcist, most are unaware of his frightening Rampage, an impressive chiller unjustly exiled to obscurity.

Loosely based on the real life story of Richard Chase, the blood-drinking, necrophiliac serial killer known as “The Vampire of Sacramento,” Rampage follows Reece after his Christmas day killing spree, as he randomly targets innocent women and children, believing that their blood keeps him alive.

District Attorney Tony Fraser, a devout Catholic, is so horrified by the carnage Reece caused, he pursues the death penalty. Unfortunately for all concerned, Reece isn't done killing yet. Half-serial killer thriller, half-courtroom drama, Rampage is an unnerving study on the nature of evil and what society should do about it.

Starring Alex McArthur as the murderous Reece, Michael Biehn as D.A. Fraser, Deborah Van Valkenburgh as the DA's tormented wife and with an ominous score by Ennio Morricone, Rampage predates the serial killer boom of the 1990s, with all the copycat movies and TV series that sprang up following the release of Silence Of The Lambs.

To Friedkin's credit, he was way ahead of the curve and, at one point, even wanted to direct an adaptation of Thomas Harris' Red Dragon.

When he made Manhunter, director Michael Mann reportedly spoke to Friedkin about the possibility of playing Dr. Hannibal Lecter. "That's true, he actually did," Friedkin laughs.

The director's documentary-style of shooting gives Rampage an uncomfortable verisimilitude, a 'You are there' feeling that is especially disturbing in the horrific opening attack, as Reese chooses his victim in broad daylight.

Most of the chase scenes and attacks use no music, with only the ambient sounds of children, dogs, birds and the crunch of gravel on the soundtrack.

"Because it was based on a real guy, that opening attack was how he used to operate," explains William Friedkin. "He would just walk down the street and get an impulse. That's basically what it was all about.  They [real-life serial killers] don’t zero in on somebody in particular – it’s just their need to kill."

The filmmaker had a lot of big questions he wanted to ask in Rampage.

"One of the questions of the film is what makes a bad person bad? Charles Reece, our film's serial killer, is medically and scientifically unsound. He has a chemical imbalance. He was liked by the people in his neighborhood – that’s real, we got that from Chase – he had a lot of people there who actually thought he was a decent kid. A great deal of the time, we realize that a lot of evil in the world has been done by people with chemical imbalances," he states.  "You can have a chemical imbalance the same way some people have a physical disorder."

Actor Alex McArthur, who plays the driven Reece (and played the Robert DeNiro role in the Michael Mann TV movie that inspired Heat, L.A. Takedown) remembers Rampage as "a haunting movie” from a performance standpoint.

"The real Chase was schizophrenic. In preparing to play Reece, I spoke to a lot of psychiatrists… I wanted to show aspects of this in his character, and they all said to me, 'Don't practice the symptoms of schizophrenia because it could actually make you schizophrenic.’ I didn't know that."

While Rampage would have been one of the first modern serial killer movies, it got killed on its way to the theater. After being shot in 1987, "Rampage sat on the shelf for a long time because it was stuck in litigation after [original producer Dino] De Laurentiis went bankrupt," sighs Friedkin. "They finally settled the bankruptcy suit and it was released [Halloween 1992, by Miramax].”

"Rampage is a movie that I am proud to be in," Michael Biehn enthuses, "It's a really good film.  Unfortunately, because of the [De Laurentiis Entertainment Group] bankruptcy, it's a very good film that got overlooked." (Another horror classic that was a casualty of D.E.G.'s collapse was Stan Winston's Pumpkinhead.) 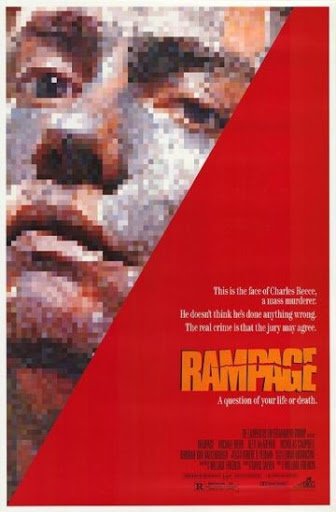 Rampage had several different posters and taglines during its brief run in theaters, including one of a digitized face that read, "This is the face of Charles Reece, a mass murderer. He doesn't think he's done anything wrong. The real crime is that the jury may agree,” and "In Modern America, The Boy Next Door Isn't What He Appears To Be."

Like Pumpkinhead, Rampage was unjustly overlooked in theaters and began building a small but loyal word-of-mouth following on cable TV and home video. It's certainly Friedkin's most unsettling film work after The Exorcist.

Deborah Van Valkenburgh remembers, "The real-life story that inspired Rampage took place in Sacramento and we actually shot the film very close to it” (in Stockton, California).

"William Friedkin was really intelligent – I enjoyed working for him and had a lot of great conversations with him on the set. William told me that he never used the same actors twice, so I was thrilled that he brought me back for [his TV movie] C.A.T. Squad Python Wolf. I personally considered it a coup to work for him again!”

What makes Rampage different from other serial killer movies is that it follows the aftermath of the victims.

A father and his surviving young son come home and find the body of the mother, as the child keeps asking, "What's the matter with mommy." The father just wants to watch his son and keep him safe in what he now sees as a dark, unsafe world. Horribly enough, the missing body of his other child becomes a grotesque plot point later in the film. The Dad tells the D.A. he doesn't want Reece free, but he doesn't want to subject his son to the trial.

With his innocent look and quiet demeanor, McArthur makes Reece bizarrely likable and undeniably compelling. When he's not on the hunt for victims, he's actually charming, including a scene where he jokes around in a prison van with several guards before he makes a vicious escape attempt. To the actor's credit, he makes Reese seem guileless, which makes his psychotic scenes all the more effective.

"I think my favorite scene in Rampage is in the van with the guards, just before I escape," Alex McArthur volunteers. "It was like playing two scenes at the same time. The banter with the guards, and what was going on in Charlie's head. I'm glad you don't see all of Reece's crimes – sometimes the imagination of the audience can be more effective then watching the inevitable scene of it happening.”

McArthur credits a lot of his performance to his time working with an open-minded Friedkin. “He gave me a lot of latitude and insight while creating the role of Charles Reece. We actually incorporated many different serial killers into the character." Indeed, the character's middle name, “Edmund,” is a reference to Edmund Kemper who, like Richard Chase, is another central California serial killer, The Co-Ed Killer, a supporting character in David Fincher's HBO series Mindhunter.

While the film is full of great character actors, like Art Lafleur, Billy  Green Bush and Royce Applegate,  a pre-Twin Peaks' Grace Zabriskie is especially effective as Reece' equally unnerving mother, who seems as crazy as her son.

"Grace is a wonderful, talented actress," McArthur adds. "She brought a lot to her character, and made my scenes with her a joy to play – she’s the perfect mother for him!"

In one of the film's most unnerving sequences, Charles Reece is on the loose again. While police with German shepherds search the surrounding neighborhood for him, Reece leaps through the stained glass window of a Catholic Church.

He's naked, his face painted gray like a neo-primitive, and attacks a priest, demanding blood.

When the police recapture him, he's sated from his latest kill, reclining at the front of the church like Bacchus, while the altar and a statue of the Virgin Mary are covered in blood splatter and bloody graffiti symbols that he scrawled.

"Alex McArthur was very intense as the killer," Van Valkenburgh praises. "I remember he hurt his foot shooting that scene in the church and they had to hide his cast. He would be very wiry and agile on camera, but as soon as Friedkin yelled ‘Cut,' poor Alex would just limp until we shot again."

"That's true," McArthur confirms. "And yes, that scene was shot in a real Catholic Church. The stained glass window I jumped through was replaced with breakaway glass. Unfortunately, there was a six-foot drop to a concrete floor, and I was barefooted… I broke my heel shooting it," he winces at the memory. (You can quickly glimpse a black stocking over his leg later in the scene and you can see the expression of pain on his face when he hits the floor, injuring his heel and ankle.)

As with Richard Chase, the real Vampire of Sacramento, Friedkin's original ending had Reece kill himself. This was deemed unsatisfying by test audiences and changed before release. Now, the ending has a creepy tagline that reads "Charles Reece has served four years in a state mental facility. He has had one hearing to determine his eligibility for release. His next hearing is due in six months.” It’s a chilling coda for the film.

The film keeps many grisly aspects of The Sacramento Vampire/Chase case, and this is acknowledged at the very end, when a credit reads "Although this photoplay is inspired by real events, the actual events and characters depicted in this photoplay are fictitious." This gives Rampage a chilling coda.