Q&A: Writer/Director Ted Geoghegan On Putting The Chill Into WE ARE STILL HERE 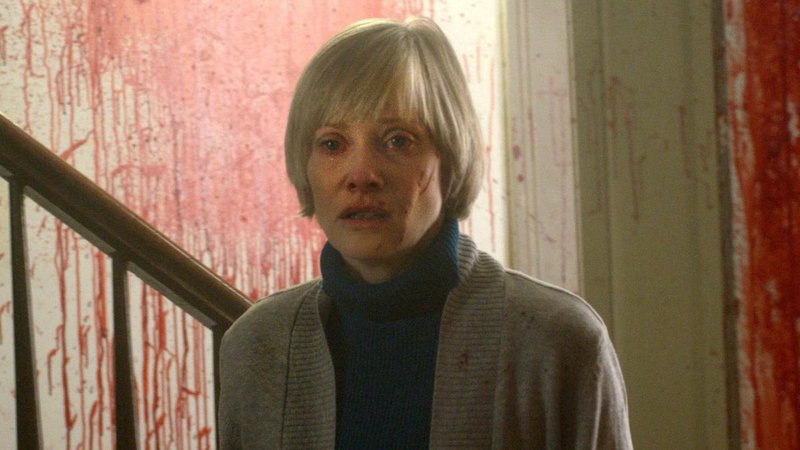 Barbara Crampton in WE ARE STILL HERE (2015)

Editor's Note: This was originally published for FANGORIA on June 4, 2015, and we're proud to share it as part of The Gingold Files.

As the summer begins to heat up, Ted Geoghegan’s We Are Still Here is bringing the shivers to theaters and VOD. The wintry ghosts-and-gore story marks Geoghegan’s feature directorial debut, one he discusses in this exclusive Fango chat.

Having previously scripted all-out splatterfests both foreign (Barricade) and domestic (Sweatshop), Geoghegan turned to a more character-based scenario with We Are Still Here, in which married couple Anne and Paul Sacchetti (played by Re-Animator/From Beyond fave Barbara Crampton and Upstream Color’s Andrew Sensenig) move to a remote New England house in the wake of their son’s untimely death. When Anne begins receiving signs that they’re not alone, the Sacchettis invite their New Age friends Jacob and May (filmmaker/actor Larry Fessenden and frequent Tim Burton collaborator Lisa Marie) to help suss out the spirits—which prove to be far more threatening than they could have ever imagined. Produced by Snowfort Pictures’ Travis Stevens and released by Dark Sky Films, We Are Still Here sees Geoghegan eliciting subtle, atmospheric creeps for a while before going for the gruesome gusto in the final act.

Was it always your intention to give We Are Still Here a slower, spooky vibe for most of the first hour, and then become an FX blowout at the end?

Its pacing was always very deliberate, on purpose. The idea was to make a film that lulls you into a false sense of security by allowing you to spend time with these people, who are completely oblivious to any danger that might befall them. Then, when the terrible things start happening, they happen so rapid-fire and with such intensity that it kind of knocks you over. I don’t necessarily think of it as a slow burn; I think the pacing is very true to the films I grew up with, that it’s paying tribute to. I believe the style in which it was written and shot will speak to a lot of people who love the movies I love.

Your scripts have been directed by a wide variety of other filmmakers in the past; was it nice to finally take control of your own material?

Yes. The reason I wanted to direct this was because I felt closer to the subject matter than anything else I’ve worked on. I can’t necessarily say it’s a personal sort of closeness, because I haven’t suffered the loss that the characters in the film have, nor am I in the age range of the leads. I feel closer to it in that it’s a real human story, whereas a lot of the stuff I’ve done previously has been slasher films and crazy, over-the-top torture-porn stuff. Not that I don’t love that sort of thing and wouldn’t kill to work in those genres again—they’re a lot of fun—but for me, it’s all about the characters in this film.

Did you find that making a film featuring older characters gave you a wider, more experienced variety of potential actors, as opposed to filling younger roles with up-and-comers?

Yeah, the casting process started with me writing the script with Barbara Crampton and Larry Fessenden in mind for their respective roles. I’m friends with them and have been for years, and had always wanted to work with them, and I crafted the character of Anne for Barbara and Jacob for Larry. Then, I was extremely happy with the cast who were ultimately hired for the other roles: Andrew Sensenig as Paul, Lisa Marie as May and Monte Markham, who plays the village elder, Dave. All of them have great genre cachet and were incredible to work with.

You do have a couple of younger people in the movie…

The young couple in the film, Harry and Daniela, are played by Michael Patrick and Kelsea Dakota, who my producer Travis Stevens and I had seen in the short film Are We Not Cats at the Boston Underground Film Festival. They had such an incredible dynamic in that movie that we decided to hire them to play a couple again in this one.

Was the script written to take place in the winter, and if not, did it require many adjustments when you decided to shoot it then?

It was originally written to take place in the fall. I had the idea of this mourning couple who are devastated by the loss of their son, and felt setting it in autumn in New England would help sell the sadness that these two people are feeling. It was not set in the snow; that was a concept Travis came up with. He thought that there had been so few genre films that are completely snowbound that doing that would make a statement. It also would make it that much more desolate for this couple, who are up there feeling very isolated. They’ve just moved into this old house, and the fact that there’s feet of snow around them in every direction just adds to the fact that there’s no place for them to go and no one for them to count on. It’s just them and the ghosts.

How was the experience of shooting in such a frigid location?

It was agonizingly cold the whole time we were there, and the house, which was built in 1860—coincidentally, the same year it was supposed to have been built in the film—had virtually no heat. We had two very small wood-burning stoves, both of which you can see in the movie, supplying heat to us when we needed it, but it was not enough.

Can you talk about collaborating with cinematographer Karim Hussain and makeup FX supervisor Marcus Koch, both of whom have heavy genre credentials?

Karim has been a friend for years, since I met him in Montreal at the Fantasia film festival, and I’ve been a fan of his work for a long time–from the earlier films he directed like Subconscious Cruelty through the newer stuff he’s been the DP for, like Hobo With a Shotgun and Antiviral. I thought he has an amazing eye for this sort of film, and really wanted him to be a part of We Are Still Here. It was a dream having him on board, and he was thrilled because he got to try out a new camera; we were one of the first features to shoot on the new RED Dragon rig. You can see the results in the film; it would not have the lushness it does if it wasn’t for Karim. He was very familiar with the look and style I was going for, and very excited to shoot a movie using modern techniques but embracing antique lenses and odd angles, and trying things that were outside the box.

I’ve also known Marcus for over a decade. We first worked together on a movie I wrote called Nikos the Impaler back in 2003, and I’ve remained friends with him ever since. We’ve done a number of projects together now, and he’s my go-to effects guy. He and his team did several gory bits for We Are Still Here, as well as the Dagmar family, a mother and father and their little girl—a trio of pioneer ghosts causing a lot of trouble in the house. Marcus had the joy/torture of dressing up three extremely understanding actors day after day in head-to-toe makeup appliances.

You have some impressive visual FX of the ghosts smoldering and sparking; who was responsible for those?

Those were done by Eli Dorsey, a CGI artist out of Portland, Oregon. He had worked with Travis before, and came very highly recommended. One of the keys to the film for me was trying to make it appear as if there’s no CGI in it. I wanted everything to seem extremely practical, so all the acclaim goes to Eli, in that you can’t spot that many of the visual effects. The ghosts were victims of a fire, and have whited-out eyes and little cracks in their skin that hiss and pop and have a lava-like appearance. They have smoldering embers coming off their bodies, and there’s a faint heat signature on them that warps them slightly. But the shots are so quick that the digital effects Eli placed in the film blend seamlessly with Marcus’ practical effects, and they just look like a terrifying family of ghosts.

What is your strongest overall memory of making your feature directing debut?

The first day of filming was scenes with Barbara Crampton, Andrew Sensenig and Monte Markham, and I remember walking onto the set, and it was such a well-oiled machine. Travis had things running so smoothly, and the actors were just dead-on, and I suddenly realized I was about to direct a woman who’d been directed by Stuart Gordon, a man who’d been directed by Shane Carruth and another man who’d been directed by William Castle. I definitely took a step back, and was like, “Holy cow, those are some big directors’ footsteps to follow in.” Then I started thinking about it more, and realized that Larry and Lisa were about to arrive, and they’d been directed by Martin Scorsese and Tim Burton, respectively, and it struck me that I had a cast who had an amazing background with incredible directors. It put me in my place very quickly, and made me realize that I had to bring my A-game to this—because all of them had certainly done that in the past.