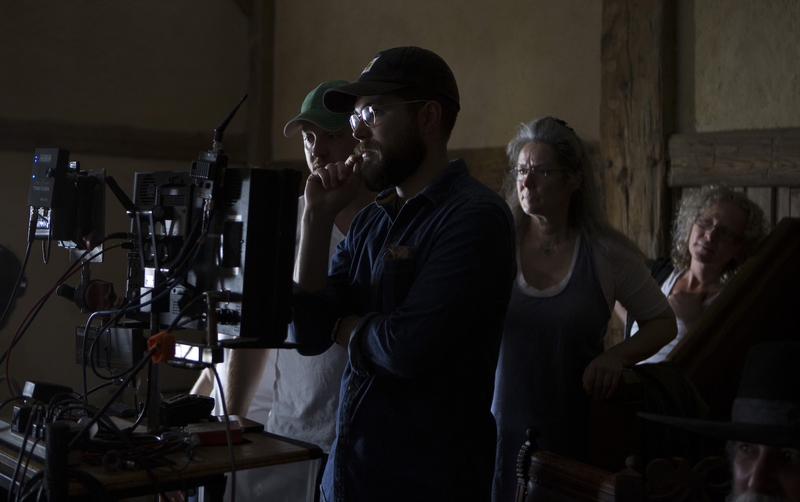 Editor's Note: This was originally published for FANGORIA on February 15, 2016, and we're proud to share it as part of The Gingold Files.

A decade and a half ago, The Blair Witch Project emerged from nowhere to become a Sundance Film Festival and box-office hit, and now The Witch is on the path to becoming a similar indie horror breakout. Writer/director Robert Eggers reveals how it came to be in this exclusive FANGORIA interview.

Winner of a Best Director award at last year’s Sundance Film Festival, The Witch is set in New England in the 1600s, but does not concern the infamous witchhunts in Salem, MA. Instead, it focuses on a family who are cast out of their small community due to the progressive religious beliefs of their patriarch, William (Ralph Ineson). After they set up a small farm at the edge of foreboding woods, strange incidents befall them that seem to be centered on teenaged daughter Thomasin (Anya Taylor-Joy). Mistrust and terror take over the lives of the parents and children, and Eggers gradually builds an atmosphere of suspicious dread, and ultimately deep supernatural terror. Eggers, who has won several other festival prizes for The Witch, came to his feature scripting/directing debut after a couple of short films (including an adaptation of Edgar Allan Poe’s “The Tell-Tale Heart”) and production and costume design work on a number of movies, among them the acclaimed, similarly slow-burning Yellowbrickroad.

What led to your decision to make a period film about witches and paranoia that is not about the Salem witch trials themselves?

I grew up in New England, and if you’ve been to a rural town there, you can’t escape New England’s past. I lived on a dirt road in the middle of the woods, with dilapidated colonial farmhouses down the lane, and that area’s history has always been part of my childhood consciousness. I had an idea as a kid that those surroundings were haunted, and a strong sense of their mythic past, so I wanted to make an archetypal New England horror story that would bring people into the mindset that I had as a kid. Moreover, when I began researching the idea, it became clear that this had to be like a nightmare from the past—an inherited nightmare, or as I’ve said, a Puritan nightmare.

Were you attempting to make any kind of statement about religion or tolerance?

No, I wouldn’t want to do that. It took me a long time to get into the mindset of these strict English colonists, but I soon came to love this family, and I didn’t want to judge anybody. Anytime you have intense dogmas that shut out large parts of the human experience, though, you’re going to have the things that you shut out explode all over you.

How did you go about developing the characters of the family, and the terrors they go through?

Well, when I was going through the research and picking up all this stuff, I found that in the folk tales and fairy tales, and the real accounts of the past, the same kinds of story beats, the same themes and motifs, kept recurring. So I felt all those things needed to be in the film, and then it was about figuring out which were the things that spoke the most personally to me, that were the most exotic and strange but somehow worked for the story, like the hare and the raven. I went in with sort of a basic idea of wanting to do this über-witch story, then realized that it was going to be about a family that’s like a microcosm of their society, and the characters fell into place after that. Earlier in the writing, there was no real protagonist, and the witch manifested herself in different ways through different characters, and you got to learn about them that way. And through that, the family took shape.

When you were shooting, did you have your cast immerse themselves in the setting and period and not avail themselves of modern technology?

No one on set was super-Method. We were very well-rehearsed; we had a week of rehearsal ahead of time, which is not a lot but certainly was for a budget of this level, and was a real luxury, and we needed it. They were learning how to use the farm tools properly and how to milk goats and deal with the animals and so forth, and spending time at the farmhouse so it could feel like a home. It was very important that the actors bonded and became a close family, so they could then tear themselves apart [laughs]. There was a true dedication to the world, and during the shoot itself, we really were very isolated on set; there was no cell service, no Wi-Fi, nothing.

So while the little kids definitely played on iPads in between things, in general there wasn’t much opportunity to do anything but be there, you know? The shoot and the circumstances and the location did a lot without having to impose an extra rigor on top of that, and also, the kids needed a very defined understanding of what the film was. A lot of the way I directed them was sort of mannequin acting: “Stand there, open your eyes, open your mouth a little bit, breathe a little faster”—so the kids looked scared, but I wasn’t, like, ruining them [laughs].

Your two leads are especially impressive. How did you find Taylor-Joy and Ineson?

I had the voice of Ralph as William in my head when I was writing before I figured he was actually going to be in the movie. Because this was my first feature, at that time I was trying to chase names—which was not what I wanted to do, but I felt no one would finance the film otherwise. Finally, we found this one great investor who truly understood the vision I was going for, and I was able to cast whoever I wanted, so I was like, “Let’s check out Ralph.” I knew him from [the British version of] The Office—I know that’s weird [laughs]—and William is partially based on the father of one of my childhood friends, who had a very, very low voice. Ralph is super-powerful, and he was so committed and threw himself into it; he grew out his beard and his hair, and was chopping wood and preparing and losing weight.

With Anya, we had an excellent UK casting director who helped us find all the kids, which was very difficult. But Anya’s was actually the first tape I watched for Thomasin; truly, I saw so many talented young women, so many strong actresses, but Anya was definitely the only Thomasin. She’s not really Puritan [laughs], yet she seems old-fashioned, and you can believe her on the farm, and she has a facility for the language that’s really impressive given her age, and that she’s not a trained actress. Her onscreen presence is very interesting, because you’re drawn to her, but at the same time, you don’t know what she’s thinking no matter how close we stick the lens up in her grill. You’re trying to understand what’s going on in there, which was really helpful.

The Witch has a great slow burn. Can you talk about the pacing and the gradual reveal of the horror, and your decision of how much to actually show the witch?

Well, I enjoy really slow movies [laughs]; this feels like an action film compared to the ones I watch! I like creating an atmosphere where you can feel the dread on the back of your neck the whole time, like a guilty child, and that was crucial and exciting for me. Also, certain things kind of revealed themselves to me as I was writing, so it worked out well. As far as not showing the witch, that’s very much a part of my belief system, if you will: I think the audience’s imagination is much more powerful than anything I can give them. Obviously, there are ways I can articulate things visually, but in the end, what scares you personally, I don’t know. I can give you as much as I can, but if you can finish it with your imagination, it’s going to be more powerful. Like, I love ALIEN, I think it’s great, but I wish that last shot when the Alien is floating outside the capsule, and you see its whole body, wasn’t in there, because it does look like a guy in a suit in that shot.

You found some very evocative locations to shoot in. Where were they, and how did you secure them?

We shot in northern Ontario. It broke my heart, as a New Englander, not being able to shoot in New England, but for financial reasons we went to Canada. It was hard to find a forest system that matched New England enough to be believable, and the trees had to have enough size to be imposing. However, it worked out really well, and the local carpenters, especially, were incredible. The farm was, depending on the weather, a 45-minute to an hour drive from where we were staying. It was very isolated, in a place called Kiosk, a former lumber town that was abandoned many years ago. Nearly all the woods were right around there, and the witch’s hovel was a little bit down the road.

We tried to find as much as we could in that area, and all the locations were as close to the farmhouse as we could possibly manage. Some of them became difficult to get to, like the overturned tree where they set the trap and the stream where they do the laundry. It required a big to-do to get the dolly down there; when we were shooting the scene at the stream, the dolly was sinking the entire time. It was pretty scary.

After all that work, the response to the film must be pretty gratifying…

Well, I had to believe that there was an audience for this film, because I could have never gotten it made otherwise. But certainly, I didn’t think that so many people would be excited about a boring Pilgrim horror movie [laughs], so it’s been great!