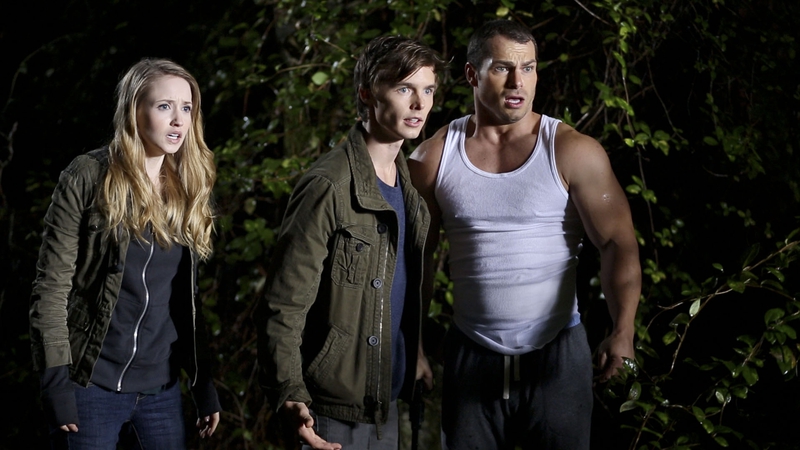 Editor's Note: This was originally published for FANGORIA on November 26, 2014, and we're proud to share it as part of The Gingold Files.

Feed the Gods looks like a Bigfoot movie on the surface, but there’s more to the monster and its story than it initially seems. FANGORIA spoke to Canadian writer/director Braden Croft to dig beneath the surface of his creature feature.

Following his debut film, the quietly unnerving serial-killer/road-trip drama Hemorrhage, Croft decided to go for something “broader and lighter” for his second outing. Initially pursuing a found-footage movie involving Bigfoot, he decided to switch to a more traditional narrative after learning of the similarly themed Willow Creek and Exists. The story he came up is set largely in the remote town of Tendale, where brothers Will (Shawn Roberts of Land and Diary of the Dead and Resident Evil: Retribution and Afterlife, among many genre credits) and Kris (Tyler Johnston) travel with the latter’s fiancée Brit (Emily Tennant) in search of their long-lost parents. What they find are residents who treat them with suspicion and worse, and are in thrall to a half-human creature that preys on outsiders.

Inspired by Native American folklore, Croft came up with an original and detailed backstory for Feed the Gods, which is gradually revealed while the contentious relationship between Will and Kris, and their and Brit’s attempts to investigate and then escape Tendale, take the foreground. It continues the emphasis on character that also distinguished Hemorrhage, and marks Croft as one of the more distinctive up-and-comers on the horror scene.

How did you approach the revelation of Tendale’s background and the creature’s mythology over the course of Feed the Gods?

My intention was to work glimpses, small tastes and an oral history into the broad strokes of the backstory. Wild Man idols, the town’s sacrificial protocols and videotapes were the elements I used to explain it. Having a character overtly deliver a somewhat complicated history seemed too tedious and heavy-handed. In hindsight, I do wish I had indulged in it more.

The monster is largely kept offscreen for most of the movie. What led to that decision?

If there’s anything most Bigfoot films have in common, it’s the full exploitation of the creature and special effects work. Knowing we couldn’t deliver gallons of blood for crowd-pleasing gore shots, or Stan Winston-esque detail for the creature, we embraced a story that would focus on the leads and the town itself.

The initial found-footage incarnation of the project called for vague sightings and broad encounters with the Bigfoot—not unlike in Willow Creek or The Blair Witch Project. So I hired Travis Shewchuk, a local effects maestro, to create a “silhouette-worthy” creature. The idea was to make a no-budget approach work in our favor. As the project changed to a traditional-style film, I felt the need to bring the monster closer to the camera; the only problem was that the costumes were never intended to be seen in extreme detail. The creature managed to stay tucked away for the better part of the film—which I enjoy in this kind of movie—but the climax needed a payoff.

With next to no resources and time, Travis Frankensteined his creation into close-up-worthy detail, and we shot the monster portion of the showdown scene six months later, in the dead of winter. It was a four-man crew with a non-actor buddy of ours in the suit, freezing his ass off in the 40-below Albertan winter. If it weren’t for Travis—and the fact that coniferous trees don’t lose their color in winter!—the scene would never have cut together and worked as well as it did.

Did Shawn Roberts’ heavy genre résumé factor into his casting?

Having Shawn join the project was a complete surprise and personal thrill. I mean, the guy has worked with George Romero! I knew he’d elevate the film with his dramatic chops and comedic timing. He’s a very talented actor, and his thorough experience in the horror world was icing on the cake.

How did you select the other two leads?

Tyler was a mutual friend of someone I dated, and an actor I saw reading in audition rooms back when I worked in a casting studio. He’s a crown jewel in the [Canadian] West Coast acting world, and someone I felt privileged to have on board. Emily was a special find whom our casting directors insisted we read. She lit up the room and won everyone over as Tyler’s better half. Their compatibility and chemistry was a lucky break that I couldn’t have predicted beforehand.

How did you find the evocative locations that represent Tendale and the surrounding forests?

Our co-producers, Danielle Stott-Roy and Robin Nielsen, were Vancouver locals who rolled some impressive numbers on their odometers trying to find our shooting sites. I was left blind to them until the last minute, as I was in my hometown of Alberta. Teresa Trowsdale, a.k.a. Saint Teresa, the owner of our makeshift bed-and-breakfast, was an ex-location scout by coincidence and lent her home as the movie’s primary location. Though I wouldn’t recommend filmmakers going in blind to a location, having a great team scouting for you sure helps.

How did the shoot go?

I made the mistake of shaving my beard and losing my directing aura, so it was a challenging three weeks [laughs]. Hemorrhage was a period of intense mood swings, and Feed the Gods was entirely different in process but exactly the same emotionally. The shoot afforded me the skills and talents of amazing collaborators, but also the challenges that come with a larger production. Being a perpetual worst-case-scenario-ist and creative masochist didn’t do me any favors either, but we came out alive and on budget.

Were there any hurdles to overcome due to the budget or remote locations?

Yes. Always. Forever. In all honesty, the challenges of a low-to-no-budget film are only as severe as the people facing them. If a cast and crew are on the same page and willing to plow through the obstacles with you, it can be an enjoyable, intense and hilarious time. Luckily, we had fantastic people on the team, and the typical production issues—not enough time, not enough money, not enough whatever—were no harder than they would be on a higher-budgeted film.

As for the locations, nothing was too remote, with the exception of the cave—which, if memory serves me correctly, was known as The Sasquatch Caves. It was dark, moldy and absurdly cold, and Shawn was in his underwear for that entire portion. Luckily, that was the final day of shooting, and he muscled through it.

Always my favorite question! I have a two-hander psychological thriller/horror movie that I’ve been developing for some time. I suppose you could pitch it as The Game meets Misery. It’s a dark and twisted cat-and-mouse story that will bring me back to a more serious place [it eventually emerged as 2019’s True Fiction—MG]. In all honesty—and I know filmmakers say this all the time—I haven’t been this excited to make a movie in my life.