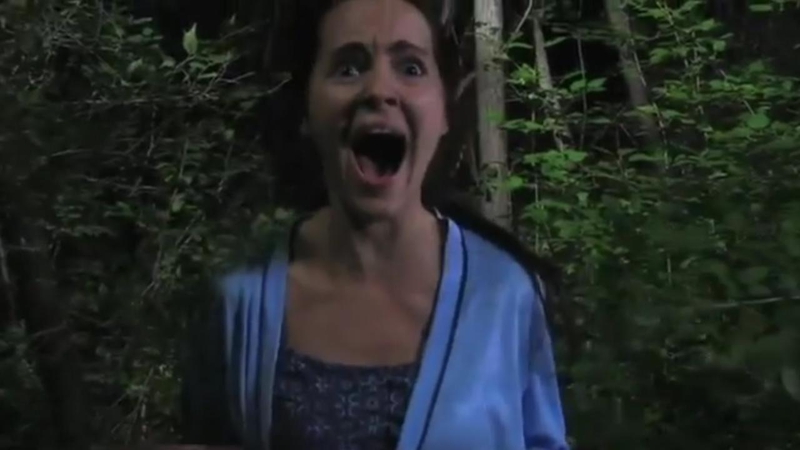 Editor's Note: This was originally published for FANGORIA on December 1, 2011 and we're proud to share it as part of The Gingold Files.

There have been lots of movies about terrible things happening to people in the forest, but writer/director Devi Snively brings a fresh and funny perspective to the form in Trippin’. Following a lengthy run on the festival circuit, Snively’s first feature with her Deviant Pictures team, after numerous acclaimed short films, has made it to theaters, with DVD release to follow. We chatted with the filmmaker to celebrate the occasion.

What is Trippin’ all about?

It’s a story that’s never been done before: Three couples go to a cabin in the woods, and bad things happen. Anyone who’s gone camping can tell you that these things are inevitable, especially since we’ve got one character who’s sort of the whiny troublemaker. It’s very character-driven; there are a lot of interpersonal relationship issues, but then of course you’ve got your creepy locals and a good amount of gore.

From the title, one would imagine there’s a bit of drug use going on.

Oh, yeah; we’ve got a drug-trip scene that involves one of our characters turning into a puppet, among other crazy stuff. There’s quite a bit of drug use.

Is it oriented more toward horror or comedy?

Definitely more comedic. A quote we got about it was “The Big Chill meets The Evil Dead for the Kevin Smith generation,” and I think that sums it up perfectly.

How did you make the transition from the many shorts you’ve done to your first feature?

Actually, it’s not that different; it just takes a lot longer, and you have to cut a lot more out of your schedule. We shot over 16 days—18-hour days for me, with insomnia, that was fun. We’d been prepped on everything from the shorts, so it was a natural next step.

Were the cast and crew made up of people from the shorts?

Not entirely; we held auditions in Chicago, Cleveland and Indiana. We shot in Michigan, and took videos from around the world. So we had a lot of new faces; I think we only had a couple of the usuals. Most of the crew was made up of people we’ve used before, but again, we put a wide net out. Our AD and production designer came from upstate New York; we’d never even met before, but they were great and volunteered their time. Some of them were just people who were interested in working on their first feature.

What did you bring from your short-film experience to Trippin’?

A ton of resources, actually. Also, watching our shorts with audiences has taught us how to be entertaining. I can’t watch some of our earlier films now, because it’s so painful. I’ll always remember, “This is where there was a lull, this is what people like, this is what people remember,” so I feel we have a good understanding of audiences, of genre fans. We’re not trying to pander to them, we’re just trying to keep them entertained, because that’s what it’s about.

Was it a smooth shoot?

That’s an oxymoron. Actually, I had one blow-up as a director, for the first time ever. I lost it on set on day three. And it was a really good thing; I made a public apology to everybody and I learned to take time-outs and go off by myself for five minutes.

We also had all sorts of extreme weather. It was really, really hot when we were inside this tiny cabin with a lot of lights, and really, really cold when people were running around in their skimpy outfits in the woods. I mean, it got down to the 40s in the woods in August in Michigan. That said, on the last day, I think we wrapped at 4 in the morning on a Monday, and it was just a lovefest. It was like the end of summer camp, and everyone was sad it was over. We’ve had a couple of reunions since then, and “Summer of ’69” was an anthem; everyone was like, “That was the best time of our lives.”

Did you have outside investors on Trippin’, or was the money all yours?

Nope, rebel with a trust fund. I could pay off my school loans or make a movie. But it was literally no-budget. We got all of our locations, most of our props, our equipment, our effects, all that stuff pro bono.

What format did you shoot on?

We actually shot on mini-DV; it was just at that point when everyone was switching over to HD, but it was either do it or not do it. We got a lot of help from one of the top post houses in LA, and we did another short in mini-DV that everyone thinks was HD, it was so well-lit. We got about $10,000 worth of free lights and a great jib. So it looks good.

How about the music?

We have a fabulous soundtrack; it’s all Northern and Southern California punk bands and this wild London group. All people I met on the film-festival circuit. The soundtrack’s almost better than the movie…don’t tell anyone!

Even though there are a lot more female horror fans than there used to be, it seems like the number of female directors in the genre is still rather small.

It’s growing, actually; I’ve met a number. I worked with a couple of female directors on a short called I Spit on Eli Roth. It’s not mean-spirited, it’s a parody; we were talking about how the bar in horror has been set a little bit low as of late, and we blame him in the movie, but then we ultimately take responsibility as fans and as makers of movies ourselves. My concern is…there have been female-oriented horror-film festivals and I’ve been involved with them, and some of the stuff is really messed up and creepy and fun, and with others, I feel like women aren’t making the genre their own. Not to say there should be a huge divide, but I hate it when somebody just makes a film to emulate other films. I think some women are trying to be men making horror.

I’m all about female-friendly horror. Not perky, not any less poignant or creepy, but I deal with a lot of women’s issues. Write what you know. I don’t know what it’s like to be a man. People will frequently comment that I have very strong female characters who go through a whole journey, and that’s because that’s what I understand, so that’s gonna be the focus.

Did Trippin’ turn out to be everything you hoped it would?

It’s a completely different movie than I expected, but I’m really happy with it. We made a lot of changes in post that I wasn’t expecting. We got a Chinese animation company to do a lot of the effects, so the scene where the character turns into a puppet and becomes animated is really crazy fun. That was not part of the original plan, but it adds a whole new layer to it.

Trippin’ played at a number of festivals over the past couple of years, and now it’s finally getting a general release. Was the road to distribution a rough one?

Well, I was at the American Film Market a couple of years ago and talked with a lot of people, and things are so different now. The scene is so flooded with product, and it’s not really a seller’s market. You look at films like Paranormal Activity and others that have done well, and it’s all about marketing, and many people are self-distributing and doing better that way.

Are you going to stick to features now, or do you plan to do more shorts in between?

I don’t think I’ll ever stop doing shorts, just because they’re so fun and I have lots of stories I’d like to tell and you can knock them out quickly. But yeah, I have the feature bug.