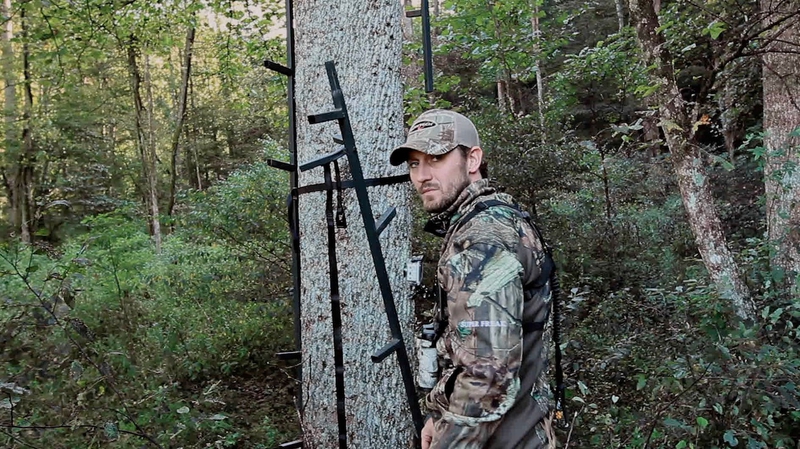 Editor's Note: This was originally published for FANGORIA on September 9, 2014, and we're proud to share it as part of The Gingold Files.

Debuting on DVD and VOD from Entertainment One, The Hunted is a horror-in-the-woods film that marks the directorial debut of actor Josh Stewart—and a change of pace from his previous chillers, The Collector and The Collection, one that he took some time to discuss with FANGORIA.

As opposed to the confinement terror of the aforementioned movies, The Hunted has Stewart and Ronnie Gene Blevins traveling into the great outdoors as Jake and Stevie, best friends and hunters. Wielding not just their bows but also cameras, as they believe they can capture footage for a TV hunting show, the duo soon find that something is stalking them instead. Stewart called on Collector and Collection producers Brett Forbes and Patrick Rizzotti to help him on this trek into terror, which derives from his own experience…

What was the inspiration for The Hunted?

The Hunted is a personal story that actually happened to me when I was in college, so I wrote it, directed it, produced it and starred in it—the whole bit. It’s kind of crazy when you work in the horror world, but to take something from my own life and turn it into a movie was pretty cool.

Can you talk a bit about the real incident, and how you adapted it into a screen story?

While I was living at college, my roommate and I figured out that there was something more going on in the woods than just us being around. I don’t want to give anything away, but we started looking for it, trying to find it, trying to figure out what it was. When you check out the movie, it’s pretty spot-on; everything that happens in it is based on actual encounters we had with this thing.

How did you adapt to being a director for the first time after all your experience as an actor?

You know, the way I was taught to approach acting, to do your homework for it, lends itself to directing. It’s like working from the outside in; you’ve got to see the whole picture, you’ve got to understand the whole picture, you have to know what the story is and understand it, and then figure out where your piece figures into that puzzle. If you don’t understand the whole thing, then how are you supposed to fit yourself into it? I’ve always approached it coming from a complete and total story standpoint, and then working my way into that. So that side of it was easy—but when you’re on location and doing it, it’s like your brain is on overload. I’m pretty sure I lost, like, two-thirds of my brain function working on this movie.

What kind of guidance did your Collector/Collection collaborators give you in terms of being a director?

They gave me the best kind of guidance I could have asked for. Anything I wanted and needed, they had it there ready and waiting. They were Johnny-on-the-spot and just said, “Go make it. Do what you need to do,” and let me make it the way I wanted to. On something like this, you need to surround yourself with people you know; if you’re gonna go to war and wade through all that, you want people there where you know how they’ll react in those situations. Having done The Collector and The Collection, I knew what those guys were like and how they were gonna be, and so it all worked out; it was perfect.

Both of those films were claustrophobic, with your character trapped indoors, and this one is kind of the exact opposite…

Well, it is—but at the same time, once it gets dark, there’s still that sort of claustrophobic feeling, you know? When you only have a flashlight, you can only see so far, so it’s like you create a little box around you. You have a little patch that’s illuminated, but what’s right on the other side of that? It’s sort of the same thing; I don’t care if it’s a physical wall or a wall of blackness; there’s still a wall, and you still don’t know what’s on the other side. So it’s still the same sort of thing dealing with the same sort of themes, the same sort of danger. It’s actually a little scarier to me in the woods, because there’s no physical barrier between you and what’s out there.

Does The Hunted ever get as graphic as the Collector films?

It’s the complete opposite; you will find very little blood, gore or any of that stuff in this movie.

Was that a conscious choice, or just the way the material took you?

No, completely; I wanted to stay true to what the story was about, so that was number one, but number two, I really wanted to try and move people and affect people and scare people without all of that other stuff. To me, the scariest things have to do with when your mind wanders and where your mind goes; then it’s everybody’s monster.