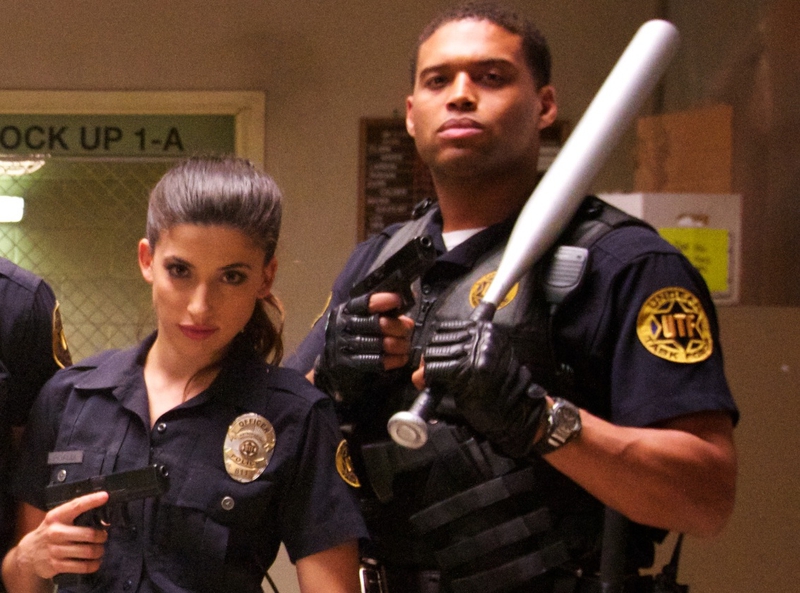 Editor's Note: This was originally published for FANGORIA on November 25, 2011 and we're proud to share it as part of The Gingold Files.

Having wrapped up its first run on MTV, the popular horror/comedy series Death Valley is now available on DVD in a Season One Uncensored two-disc set, with special features including an exclusive alternate ending to the pilot. To help spread the word, we’ve got a chat with two of the show’s leads, Texas Battle and Tania Raymonde.

Both veterans of screen horror/fantasy (Battle in Wrong Turn 2, Final Destination 3 and other features, Raymonde as a regular on Lost), the actors play Officers “John John” Johnson and Carla Rinaldi respectively in Death Valley, which takes a vérité look at the activities of a special division of the LAPD set up to deal with the vampires, werewolves, zombies and other real monsters lurking on the streets of Los Angeles. Fango spoke to the duo at the recent New York City Comic-Con.

You both have a bit of experience in genre movies and TV; what attracted you to this project?

TANIA RAYMONDE: The first thing I was attracted to was that it was funny. I read a few pages for the pilot presentation, and I didn’t really think about the zombie thing per se or any of the monsters; it just made me laugh. To be on a show that was scary and gory and gross and have all of those elements, and also be a comedy—to me, that was cool. I liked the mix of the two, and thought it was unique.

TEXAS BATTLE: Being jaded from that whole world as well, I read it and thought, “Whoa, this is different. This is a TV show that deals with werewolves, zombies and vampires. And I’d never been a part of something like that before. Zombies, I got. Cannibals, I got. Final Destination… But I want to conquer it all, actually. So I said, “Oh, this is cool,” and I got involved. And it’s also funny; that’s never been done on TV before, “Hey, we’re going to take it and run with it,” and it’s actually comedy and horror.

RAYMONDE: I have a fetish for becoming an action star. So this was like a big ego boost too, because I just love that. I don’t know what I’m compensating for, but obviously I think I’m tough. And I just…I really wanted to do that.

BATTLE: She’s a tough cookie! I love action too, obviously.

RAYMONDE: So we get to kick some ass on this, and that’s a great opportunity—especially for a chick, because most young actresses on TV shows are girlfriends or they’re whining about something or they’re just jealous about their boyfriends or whatever, and we don’t have any of that. It’s all action-driven and story-driven, and then the relationships between the people sort of develop over time, and that’s nice.

Talking about the action, since Death Valley is presented in an on-the-street documentary style, the action has to look a little messier than in something like Buffy the Vampire Slayer, where it’s very formal and stylized. Did you have specific choreography for those scenes?

BATTLE: We had choreography on certain scenes, like in episode two, where we had the whole zombie thing happening. So we had a little choreography for the zombies and where we were placed, things like that.

RAYMONDE: There’s a really cool moment in that episode where he shoots through the back of a zombie’s head with his gun. Stuff like that takes hours to set up and it’s very, very specific. So we’ve had to organize it, and choreograph the fight sequences like any others. The good thing about shooting shaky-cam style is that if there’s something that doesn’t look right, you can get away with it, since you’re not seeing everything all at once. The annoying part of it is, we shoot long takes, so there are not that many cuts and you kind of have to do this action all at once. In the script it would say, “Carla runs after John John. John John throws a clip behind him, and Carla catches it in midair and puts it in her gun and shoots the zombies.” That’s really hard [laughs]. So it took some time.

Were there any other cop shows or characters that you were inspired by?

BATTLE: I got into character by watching Law & Order or Cops before I started shooting. I went out there and John John just turned on. I love the character, I like being somewhat like him; he’s bad-ass, he’s tough, and at the same time…

RAYMONDE: He’s a little bit of a puppy dog.

BATTLE: When it comes to Carla, yes, but that’s all he cares about. Kicking ass, and Carla. That’s it.

RAYMONDE: It’s funny: I used to watch Cops with my dad all the time; he loved it. He’s never watched reality shows by any means, by any stretch of the imagination, but Cops was his thing. So I watched a lot of that stuff growing up and always liked it, and it’s ironic that I wound up in this show that’s kind of like Cops. I was also a big fan of Reno 911 and all that.

BATTLE: Did you watch any Cops before we shot?

RAYMONDE: A little bit—because look, cops stand a certain way, and how they hold their guns, and have that kind of attitude…it’s kind of tricky. There’s a certain way that a cop is, especially a chick. I have a friend who’s actually a cop in Long Beach. She’s a girl, and a few years older than I am, so it was cool to talk to her about it. She’s definitely got that attitude.

How was it dealing with being splattered with blood, and having to clean up to redo scenes?

BATTLE: What was good about our characters was that we didn’t take that much blood and stuff.

RAYMONDE: Especially if we were shooting from afar, which was good. Bryce [Johnson] and Charlie [Sanders] had a scene where they put, like, a C4 explosive inside a zombie’s belly. And they, the crew and the camera literally ended up covered in blood.

BATTLE: We had a scene where it got all chaotic and crazy, and we did get blood on us.

RAYMONDE: Yeah, that big scene in the 10th episode where it was like nonstop action all the whole way through. That was cool. It was like the apocalypse.

Texas, you’ve done a couple of horror franchises already; are there any you haven’t done that you want to do?

RAYMONDE: I want to be in Saw too!

BATTLE: Me and Tania want to be a part of Saw. Call our people right now about this!