Q&A: Ron Perlman On The Mean Streets And Psychological Darkness Of CRAVE 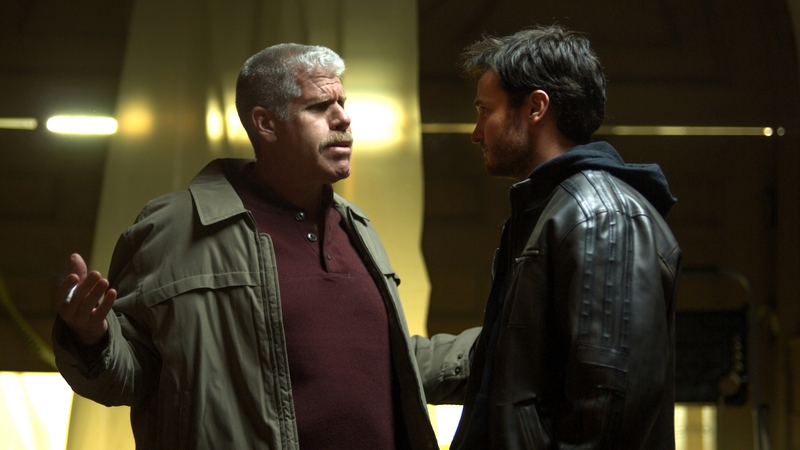 Editor's Note: This was originally published for FANGORIA on December 3, 2013, and we're proud to share it as part of The Gingold Files.

Ron Perlman has traveled into many fantastical realms on screen, most notably with Guillermo del Toro in the Hellboy films and Pacific Rim, but he’s rooted in the everyday world in the equally striking psychothriller Crave. Fango spoke to the Fango-fave actor about his role in Charles de Lauzirika’s impressive debut feature.

Crave stars Josh Lawson as Aiden, a Detroit crime-scene photographer whose interior monologues and fantasies reveal a hidden, brutally violent side, and whose demons begin to stir to the surface after he begins a relationship with pretty neighbor Virginia (Emma Lung). Perlman plays “Pete the heat,” a cop who’s friends with Aiden, and the one person Aiden reveals himself to. Scripted by de Lauzirika, who’s been acclaimed for his disc documentaries on the films of Ridley Scott and others, and Robert Lawton, Crave gives Perlman a chance to shine in an atypical role.

Crave’s Pete is a much lower-key kind of character than those you often play; was that something that attracted you to this project?

Yeah, the relationship between the cop and the kid, the photographer, is what interested me the most. It was something I’d never really seen before. Obviously, there’s something about the kid that the cop recognizes that endears him to him; he kind of gets sucked into this kid’s world, and feels he’s sort of a stabilizing force. I liked that dynamic a lot.

There’s a kind of film noir feel to your scenes together, in the dialogue and the way they’re shot. Was that something you were conscious of in the way you approached them?

No; if there was any kind of tip of the hat to film noir, it was probably more in the style in which Charlie shot the movie. When I finally saw the film all cut together, I was very impressed with what he ended up with. He had a real kind of filmic style to it that was, like you say, reminiscent of some of the best elements of noir. I wasn’t aware of it while we were filming it—that that was the visual sensibility—and I thought it elevated the storytelling quite well, just the way he lit things, the way he framed things, the way he cut things. I give a large tip of the cap to Charlie.

Did you work on the character together before shooting, or did de Lauzirika turn you loose to find your own interpretation?

He turned us loose. He really trusted what we were gonna bring, and Josh Lawson is a very inventive guy, a very creative guy. He thinks on his feet, and I like to work the same way. Between the two of us, Charlie realized pretty early on, “Let me see what these guys have up their sleeves,” and everybody was pretty happy. When you’re doing a low-budget film like this, you hope things go quickly and smoothly, because there’s not a lot of time for mistakes.

Did you find that there was enough time and money to get everything you wanted?

I think we were all aware of the fact that the pressure was on, that this was not the biggest budget we could want for a movie like this, and there was a little bit of a guerilla aspect to it, but that’s one of the things that interested me most. I think a lot of great work comes when you’re forced to be creative, and invent a style for yourself that suits the material, but also suits what you have in terms of time and money. If it’s limited, that forces you to be even more creative. That’s why I enjoy working on a smaller palette, a smaller canvas.

I gather the movie was entirely shot on location, and there were no sets involved?

All on location. There was some set dressing and production design involved, in terms of adapting the locations we were on to fit the script, but it was very raw. It was Detroit, and because there’s such a sort of smarmy feel to this guy’s walking nightmares, the city lent itself phenomenally well to that. The city is in a state of transition, to put it nicely; it’s kind of heartbreaking what’s going on there. It was a great backdrop, and a lot of guys would spend a whole lot of money to try to create what that city gives you automatically.

Were there ever any problems shooting on the mean streets there?

No. I had shot another movie there the year before called The Job, and fell in love with Detroit. I hadn’t spent a whole lot of time there in my lifetime until I did these two movies back to back. And even with all the struggle, it’s still one of my favorite cities; I just fucking love it. You can feel the history there; you can feel the fact that at one time, this was a proud emblem of America at its finest—manufacturing, Motown, all the great things that sprang out of that place. Even though those are no longer at the forefront, they’re kind of in a ghost state right now; you still feel them. You feel like you’re in one of America’s great, original cities.

You said you were kind of surprised when you saw the final cut of Crave. The movie has a very tricky tone in the way it balances reality and fantasy; was that all on the page, or was it something de Lauzirika developed in the editing?

No; any time you juxtapose what is and what isn’t, a lot of personal style is going to come into the equation. Even though the what-is part of the equation was plenty enough for me to confidently sign on to the project, I kind of had to put my hand to my heart when it came to the fantasy part—how is he going to juxtapose what Aiden is really seeing with what he thinks he’s seeing? That’s where Charlie’s hand came in; that was what was so pleasantly surprising when I finally caught up to it. I said to myself, “This guy is a real filmmaker, and he put a lot of heart and imagination on the screen.” He’s somebody I’m eager to work with again.

Do you have any specific plans to reunite?

We don’t have any plans, no, but I’m a fan. I admire him, and I admire the way the movie ultimately came out.