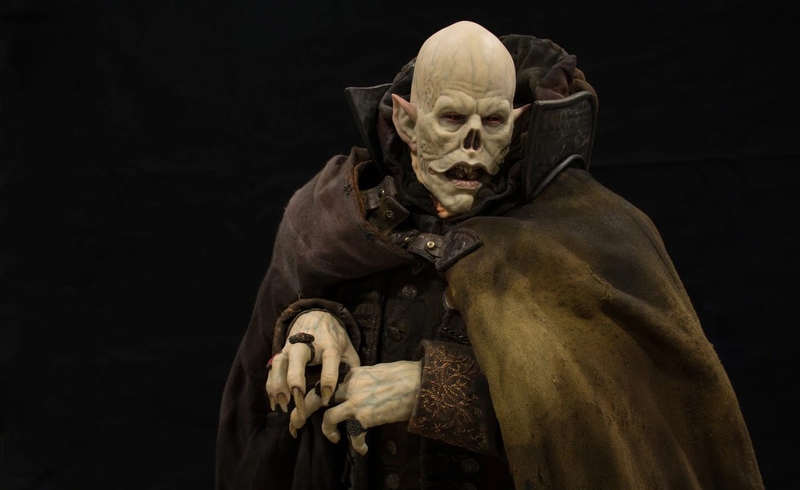 Editor's Note: This was originally published for FANGORIA on December 2, 2014, and we're proud to share it as part of The Gingold Files.

Towering actor Robert Maillet has become a familiar presence in horror and fantastic fare, if not exactly a familiar face, as his features are often obscured by monstrous makeup. The latest example is his role as The Master on FX’s The Strain. In the series, created by Guillermo del Toro and Chuck Hogan and based on their novel trilogy of the same title (which also inspired a comic-book series), The Master is the mysterious progenitor of the vampire—or “strigoi”—plague that threatens to sweep the Earth, opposed by epidemiologist Dr. Ephraim Goodweather (Corey Stoll) and a small group of followers. Seen only as a cloaked but powerful presence (voiced by Robin Atkin Downes) for most of the show, the villain finally showed his face in the concluding episode (titled “The Master,” natch)—where the actor once again sported heavy prosthetics.

Following two years with the WWF under the moniker Kurrgan, Maillet brought his imposing physique to film with parts in megamovies like 300, Sherlock Holmes and The Immortals, while also taking roles in smaller genre films such as Monster Brawl (where he portrayed a wrestling Frankenstein), A Little Bit Zombie and Septic Man. Last year, he was seen as mecha pilot Kaidanovsky in del Toro’s Pacific Rim, and he recently shot a part in a French-Canadian remake of Mario Bava’s kidnapping thriller Rabid Dogs. With season two of The Strain having commenced shooting], we present a talk with Maillet conducted at the New York Comic-Con.

Were you familiar with the Strain books before you got the part in the series?

I read the books, but that was after I was offered the part. I had heard of The Strain before; funnily enough, friends of mine pointed it out at a comic-book store in Toronto. I was working on Pacific Rim at the time, and they said, “Oh, Guillermo worked on some comics,” and I was like, “He did? He does comic books too?” They showed me The Strain and said, “You’d be perfect as that character,” and that of course was the Master, this giant. I said, “Oh, that would be cool,” but I didn’t really take it seriously—and then, a year later, I was offered the part.

Do you know if del Toro had you in mind when he came up with the Master?

He did. After I worked with him on Pacific Rim, the comic-book likeness of Vasiliy Fet, the Ukrainian rat exterminator who Kevin Durand plays superbly on the series, was based on me, which was kind of an honor. So he had me in mind for the Master, and when I saw the concept art of the character for the TV series six months prior [to filming], I was like, “Hey, that looks like me.” I was floored.

So you’ve “played” two roles in The Strain now.

Was Pacific Rim your first time working with del Toro?

It was, yes, and I couldn’t believe I was offered the part. I didn’t audition for it at all; he saw me in a movie I did a couple of years back called The Big Band—not the sitcom, an artsy, beautifully done film with an amazing cast. Antonio Banderas was the lead, and it had Snoop Dogg, Thomas Kretschmann, William Fichtner—all well-known character actors. I play a Russian boxer who kind of gets things rolling when I hire Banderas to find this missing girl, a stripper, the love of my life. It’s a homage to detective stories from the ’50s, with references to the Big Bang, the origin of the universe, throughout; it’s a very surreal film, and my character is kind of the heart of the story. Nobody really saw it; it was one of those movies that fell through the cracks and went to DVD. But Guillermo saw it and liked my performance, and offered me the role in Pacific Rim.

I didn’t know it was so big at first; I knew no details about it. He asked me if I would be available for Pacific Rim, and I said, “Sure, of course.” Then I looked it up on the IMDb, and saw it was about giant robots fighting giant creatures, and I thought, “Well, they might use me for motion capture,” you know? But when they contacted me again, I found out that they wanted me to play a human, a pilot controlling one of those giant robots. And I was like, “Really? That’s cool!” I was a fan of sci-fi growing up, so being in a big, huge film like this for Guillermo…the whole process was very special—that blonde hair included!

How did you and the Strain team develop the onscreen character of the Master?

Well, for me, it was Guillermo. He created the role with Chuck Hogan; it’s his baby. He had the characters in mind for almost 20 years, tinkering with the mythology of the story, so he took his time. The Master has been around for the last 1,000 years, so he’s very intelligent and very savvy politically. He’s evil, but from what he’s seen, humans are probably worse, you know? Like the concentration camps that they showed in the flashbacks revealing where Setrakian comes from. The Master was there, but he didn’t cause that, the humans did; humanity is capable of some pretty evil things. But the Master learns, and he has time on his hands—he is immortal—he’s behind the scenes, in the shadows, slowly learning how to take over the world. He’s a survivor, for sure.

Until the first season’s final episode, we don’t see the Master’s face, so the performance is all physical. Was that a challenge?

It wasn’t a challenge for me; I’m used to telling a story with my body. The cloak itself tells a story—how big, imposing and powerful he is. The first time you see him in the pilot, he sucks someone’s blood dry—drinks him, I guess you’d call it—and pulverizes the guy’s head like you’d crush a juice box and throw it away. That’s the idea, that’s how he feels about humans; he doesn’t care at all, they’re not a threat to him. So that tells a story, and not showing his face was a very good decision. He was talked about for the most part in the first half of the season—the Master, the instigator of the whole plague—so people wanted to see what he looks like, and then he was finally revealed.

But even though he was hidden, I still had to wear the makeup. It took three hours to get it applied—and then I put the hood on so you couldn’t see it [laughs]! But that was Guillermo’s way of filming, to make sure that if you did see something, it would look right. It’s all about details for him. I also had full wardrobe under the cloak, even though you don’t see that either. I had the period clothing on from when he turned the noble, Jusef Sardu, and took over his body 300 years ago. You don’t see it in the series, but I still had to wear it, plus the cloak over that; it weighed, like, 100 pounds.

Were you excited to finally show the Master’s visage in the last episode?

It was awesome to reveal it. The first time I saw the makeup, I was like, “Wow, that’s great”; just seeing it, I couldn’t wait to play him. I had to wear the prosthetics all day, of course, for 13-14-hour days. I remember I did that the first day we tested the makeup, which was a good thing, so I could get comfortable with it and be ready for the filming process. I had to pretend that that skin was my own skin, that his face was my own, and get inside the Master’s head. I looked in the mirror and figured out how to move, and Guillermo showed me his ideas of how the Master’s movements might be, how arrogant he is. You can tell a story with your own face and expressions, but with the makeup on, that enhances it a lot. Like I said, the Master is not concerned about anything; it’s just about his arrogance and moving very slowly and calmly. But when he does attack, he’s fierce and animalistic.

(SPOILER ALERT for those who haven’t seen the final episode…)

Can we assume we’ll see more of the Master’s face in the second season?

Yeah, though he’s been charred a bit; he had this thing with the sun, the sun doesn’t like strigoi. He’s been damaged a bit—he didn’t get out of it unscathed, that’s for sure—but he has survived, so we will see. He’s really pissed off now, so too bad about the humans; he’s going to unleash all his wrath on them. For a while, he was unbeatable and always found a way to escape death, but he came close this time; they almost got him, and now he wants revenge. Things are going to get even darker, and the humans will be an endangered species.