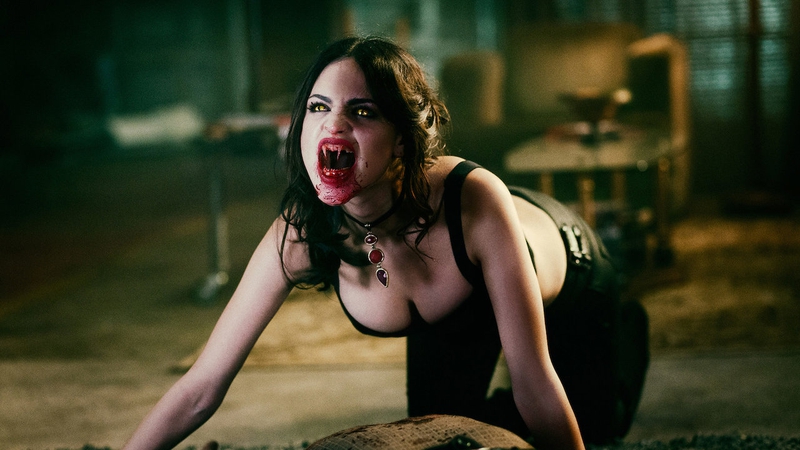 FROM DUSK TILL DAWN: THE SERIES

Editor's Note: This was originally published for FANGORIA on April 29, 2014, and we're proud to share it as part of The Gingold Files.

On the latest episode of the El Rey Network’s From Dusk Till Dawn: The Series, the movie’s iconic vamp Santanico Pandemonium takes the stage—and reveals her true, savage side. It signals the moment when the vampires take over the story, and special makeup FX supervisor Greg Nicotero really gets to show his stuff.

Santanico, played by Eiza González, is just one of the many bloodsucking creatures created for the series by Nicotero—who, of course, has been bringing hungry ghouls to TV for several seasons now on The Walking Dead. From Dusk Till Dawn: The Series, also starring D.J. Cotrona and Zane Holtz as the bank-robbing Gecko brothers and Robert Patrick as the head of the family they hijack and spirit away to the monster-infested Titty Twister bar, returns Nicotero to the scene of the crimes he and his KNB EFX partners first staged for the 1996 feature. It’s the latest in a string of projects on which the artist has collaborated with Dusk feature director and series executive producer/director Rodriguez, also including The Faculty, Grindhouse/Planet Terror, the Spy Kids movies, Sin City and its upcoming sequel Sin City: A Dame to Kill For.

How important was it for you to make the creatures in From Dusk Till Dawn: The Series distinct from those in the feature?

Well, we have a whole different sort of mythology here. In the movie, the creatures were more designed per the characters—to their faces. We created Danny Trejo’s makeup and Quentin Tarantino’s makeup and Cheech Marin’s makeup to accentuate their physical features, whereas in the TV show, there’s more of a mythology behind it. They spent a lot of time building up this Aztec background for the vampires, which was something we didn’t really have on the table in the original film. We saw this sort of Aztec temple gag at the end, that big matte painting, but that was an idea Robert Rodriguez added into the script. In doing the TV series, we’re sort of expanding on that kernel he began at the end of the movie.

Do you have more or less freedom, in terms of time and budget, on the series than you did on the film?

We had a lot of money and time on the movie, because [then-KNB EFX partner Robert] Kurtzman was involved with it. We had six months to design and build all the creature effects for From Dusk Till Dawn; we started storyboarding things in March that didn’t shoot until August. Whereas for the TV show, we were reimagining the makeups and going with new ideas, and a television schedule is a very different world from a movie schedule, so we kind of hit the ground running with some concept pieces. We did a whole bunch of different sculptures and presented Robert Rodriguez and his team with test makeups instead of doing a lot of concept drawings. We thought it would be easier for them to respond to three-dimensional objects, so we actually had a lot of makeups and dentures and contact lenses we could present to Robert.

Robert and I have a great shorthand; we’ve basically been partners for 19 years. From Dusk Till Dawn was the first movie we did together, and that was in 1995, so if I hadn’t been able to design some cool creatures for him just through osmosis, I would have been in a little bit of trouble, you know [laughs]?

Would you say your experience on The Walking Dead was a big help in terms of dealing with From Dusk Till Dawn’s production schedule?

Without a doubt. From Dusk Till Dawn: The Series would have been very challenging for us to pull off if I hadn’t spent four years streamlining our process. Even from taking the initiative on Walking Dead, I had a great opportunity, because I’m an executive producer on that show, so I have a lot more creative free rein to do what I want to do. Knowing that scripts and outlines and story documents might not get to us as quickly as we wanted them to in terms of fleshing out what the vampires would look like, we took that initiative and jumped on them ahead of when we even saw scripts, just having vague ideas of what was coming up. We needed to have stuff ready, because the process is eight-day prepping, eight-day shoot, which is very similar to what we have on Walking Dead.

The further the series goes on, the deeper it’s getting into the latter half of the film’s story, so can we expect to see much bigger FX as the show continues?

Yes. You know, the interesting thing about the original was that it felt like two films; the first half was The Desperate Hours, and the second was the all-out hell-breaks-loose vampire-shoot-’em-up situation. So what they did [for the series] was pepper a little more of the supernatural aspect up front, with Wilmer’s character [vampire cartel boss Carlos Madrigal] and things like that, so you’re able to have a bit more of an introduction to the vampires, as opposed to six episodes with no vampires and then all of a sudden they just show up.

How have the series’ cast taken to working with the prosthetics and creatures so far?

They love it. They’re fantastic; all the actors have really responded to it. Even D.J. and Zane, who don’t have to go through the makeup process, are like, “Man, this is so great; I love all the stuff you guys do.”

It’s interesting, 20 years later, to revisit this material and the cult following the original movie has. Everybody knows about it, and the fact that it’s the same group of people—that Robert’s doing it and I’m doing it and we get to collaborate on it again—is very exciting. That’s something I’ve never done before; I’ve never worked on a remake or reimagining of a project where I had done the original, so walking on the set of the Titty Twister was really freaky. You know, the set is a little bit different, but not enough that when I walked on it for the first time, I didn’t have a 19-year flashback, and memories of the movie shoot flooded back that I hadn’t remembered in a long time. Standing on the stage and seeing the neon flames, I was like, “Oh my God, I remember this day at lunch when…” It was very strange—kind of like time travel.

We had the same experience on Sin City 2, because we had a lot of the same actors back and it was shot on greenscreen again. It was like, one minute it was June 2004, and then the next it was November 2012, and I was on the same stage with the same crew and the same director and the same actor in a makeup in front of the same greenscreen. It’s very surrealistic to be able to work with Robert on these projects, and revisit the same things we did 10 years ago or 19 years ago and be able to bring new approaches to them, which is what keeps it fresh and exciting.