Q&A: John Hurt On His Futuristic Trip In SNOWPIERCER 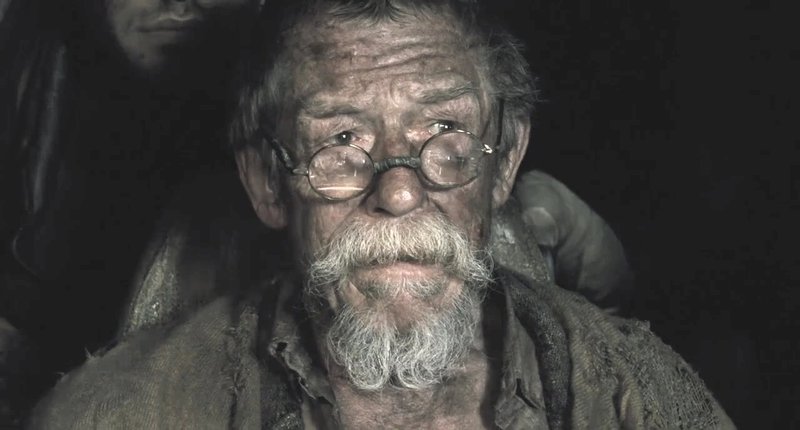 Editor's Note: This was originally published for FANGORIA on June 27, 2014, and we're proud to share it as part of The Gingold Files.

John Hurt is missing an arm and a leg as Gilliam in Bong Joon-ho’s Snowpiercer, but the actor played a role in keeping the film intact for the U.S. Hurt sat down for a one-on-one with Fango about the epic sci-fi adventure—and confirmed his upcoming collaboration with another Gilliam (Terry).

In Snowpiercer, Gilliam is the mentor for Curtis (Captain America’s Chris Evans), one of the many poor passengers on an expansive train carrying the last survivors across a futuristic frozen Earth. These unwashed are relegated to the tail section, and the film follows Curtis, Gilliam and others as they rebel and attempt to fight their way to the head of the train, where the elite live in opulence. Hurt engaged in a bit of his own rebellion when it was revealed that Harvey Weinstein, head of distributor Radius-TWC, planned to edit Snowpiercer for American screens. Hurt went public with his objections, and no doubt helped get the film issued in this country in Bong’s original cut.

Were you familiar with Bong Joon-ho’s previous films before you got this one?

I wasn’t until I met him, which was at the Soho Hotel, and it was like a love affair. It was a brilliant meeting, so then I started looking at his work. I saw The Host, I saw Mother and Memories of Murder. Wonderful films, and he was wonderful to work with. In fact, Tilda and I decided we really didn’t want to work with anybody else ever again [laughs], because he only shoots what you’re going to see on screen. There’s none of that messing around and covering it from asshole to breakfast time—you know, from this angle, from that angle, from every other angle, over the shoulder and so on. He knows exactly what he wants, exactly which bits. It’s Hitchockian, even more so. Incredible—it’s very, very difficult to do that.

Was he that precise with your character? Did he want you to perform it just as written, or did he give you room to do your own thing in the part?

Oh, no, no, he casts you because he wants you to bring what you bring. You could say he’s very generous in that respect. When I say he only wants what he wants to see, that’s once he’s rehearsed the scene. It’s extraordinary, really. I guess it’s born of necessity. I remember [on Hellboy] talking to Guillermo Navarro, who is Guillermo del Toro’s cinematographer, and I asked, “How can you do these scenes so quickly?” He said, “I’m Mexican.” I said, “What does that mean?” He said, “Well, we didn’t have anything. We had nothing to play with, and out of that, I know how to make something out of nothing.” And I guess it’s the same thing [with Bong], born of necessity. Not a lot of money, so you’ve got to decide what you want to see.

Yes, they were amazing. It’s such a great conception, this microcosm of humanity. And also the whole idea of the status quo, which can’t be disrupted—because if it is, there’s absolutely no chance of humanity succeeding, and they will become extinct.

Were the sets as cramped as they look on screen, or did you have more room to move around in?

They were pretty cramped; they had to be. They were very cleverly designed, and they were all moving on gimbals and tracks.

What was the most challenging part of the Gilliam role, as a character or physically?

Well, physically, no question, the fact that I had one leg strapped behind me, trying to stagger around on those not very easy-to-use crutches. So I had all that, and having to make it look like as though I’d been doing it for years. Some of it was greenscreened, but it’s expensive, that kind of greenscreening, so they tried not to as much as possible, and my leg was just strapped up, staggering about. But as I said, Bong shot exactly what he wanted to see, so I didn’t have to do it from this angle or that angle all day long until it bored you to death. Just that bit, from there to there—he would stop me halfway through a line sometimes!

When I spoke to Tilda Swinton earlier this year, she said that after doing Snowpiercer, you injured your foot for real and had to actually be on crutches for Only Lovers Left Alive.

I know [laughs]! Such is life. I did, I fell 14 feet and landed on my heel. And a heel is a bit like a crunchy bar; it doesn’t break, it explodes. There’s nothing you can do about it; you just have to wait for it to heal, and hope it will become more or less as it started off.

And did it in your case?

Working with Swinton on two films in a row, with her playing such distinct characters, must have been a fun and interesting experience.

Yes. I’ve known Tilda for years, but I’d never worked with her before. Now we’ve done two together, and hopefully we’ll do another. Those were two extremely different characters she was playing; it was amazing. One with Jim Jarmusch, who I’ve worked with twice before, and one with Bong, who are also very different—the whole atmospheres on their sets.

Was there any language barrier interacting with Bong on the set? Did he have a translator, or could you communicate directly?

[Looks over to where Bong is giving an interview with a translator] Well, actually he’s lazier this time with the language than we was when we working together [laughs]! I suspect he’s been in Korea for quite a long time, so he’s not trying to speak too much English. He was actually pretty fluent in it, it seemed to me. Maybe he didn’t understand as much as it seemed he might, and he did always have an interpreter—but even when he’s explaining something in Korean, you don’t need an interpreter; you can tell. He’s very physical.

How about the rest of your co-stars?

It was a fabulous cast. Song was amazing, and Chris was very good; I really enjoyed working with him. I think he wants to give up acting, though, because he wants to direct. I suspect he’d be rather a good director, too. But you never know, do you, because my friend Matt Smith went off to make a film with Ryan Gosling, his first movie [Lost River] in Detroit. And Ryan Gosling got slaughtered [by critics at Cannes] for it! I can’t understand that, because when you look at Ryan Gosling’s work as an actor, it’s really quite straightforward. It’s very good, but it’s not on the edge particularly, I don’t think. So for him to be accused of making basically the most pretentious piece of film ever—that really surprised me. I thought it was quite odd. I would never have expected that. I haven’t seen the movie, so I can’t really comment on it, but I felt very sorry for Matt, because I had just worked with him on the 50th-anniversary episode of Doctor Who, which was very fun to do.

Can you talk a bit more about that experience?

I enjoyed it hugely! I played the War Doctor. Everybody was in it because it was the 50th-anniversary show, and David [Tennant] and Matt were like a double act. They’re extraordinary together—like a musical team, almost. And then I come charging back across the desert, having gone through the Dalek wars and so on, which is the bit they don’t want to think about. It was very interesting playing part of a person, if you see what I mean, and yet the complete person at the same time. It was shown in 94 countries simultaneously, both on film screens and on television. It sold out in Sydney, for instance, in 10 minutes, and it was in the middle of the night, so they all came in their dressing gowns [laughs]! It was wonderful.

Did you know the show well before you took part in it?

Oh yes, I was brought up with it. I mean, I’ve been in the business a little bit longer than Doctor Who, but not that much—55 years. It started off as a funny little English science-fiction show, and now it has become…I thought it was a cult piece, but it’s miles more than that now. It’s absolutely mainstream, everywhere.

Getting back to Snowpiercer, I guess we in the States have you at least partially to thank for letting us see the film in its entirety. You made a lot of noise about the potential cuts.

I was very vocal about it, yeah. I’ve got a long involvement with Harvey, and of late he seems to be insistent on changing everything, particularly cutting things short, and I think it would have wrecked this film. And it’s a pity, because he had intended to give it a much bigger release. Now it’s going to play quite differently—but you know, I think nowadays that’s not a bad idea. The whole concept of [the money] having to be made in the first weekend is ludicrous for many films; far better, I think, to create a cult status, and then a bigger cult status, and then get into something even bigger than that in other media. That’s a better way of approaching it. Things are definitely going to change in that direction anyway. You cannot go on relying on the first weekend, trying to get up to, what, $250 million in those few days. That’s just asking for the demise of the film industry.

Did anyone advise you against speaking out publicly against Weinstein?

How much did you know about the changes he wanted to make? Were you aware of the details?

Not all of them, but I knew it would be everything that involved the characters. All the stuff that the fans actually adore and are tweeting about, he would have cut and just left the action, and the action simply doesn’t work without the rest of it. It would just be gratuitous violence then.

It’s a lesson to be learned from Alien, where if you took out the character-building scenes, it would just be another monster killing people.

It’s silly, and it has nothing to do with how the film works. And Alien is still hugely popular. I mean, if I’m doing a play, and there are people at the stage door wanting autographs and so on afterward, I guarantee you that 30 percent have got pictures of Alien, still, and that’s over 30 years old.

All things being equal, I hope I’ll be working with Terry Gilliam next year on The Man Who Killed Don Quixote, the one he’s been trying to make for eons.

So that’s finally getting up and running?

I hope so. I’m going to go out and do a test for him—not for me, but for the young man [who will co-star], and when I get back I’ve got to find the time to learn it.