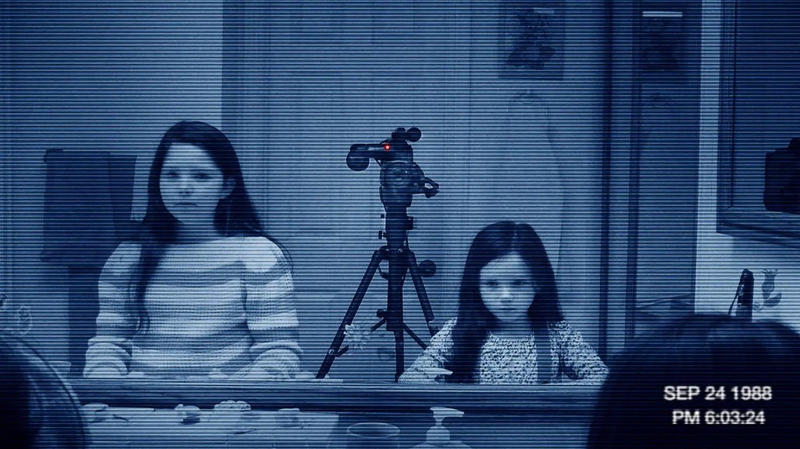 Editor's Note: This was originally published for FANGORIA on November 14, 2011, and we're proud to share it as part of The Gingold Files.

Paranormal Activity 3 crossed the $100-million box-office milestone over the weekend, and has a shot at becoming the highest-grossing film in the found-footage franchise. But producer Jason Blum, who’s been with the series from the first movie, has little time to celebrate; he’s busy on a full slate of genre features. He spoke to Fango about the making of Paranormal 3 and what’s up with his other horror projects, including original Paranormal director Oren Peli’s Area 51, Rob Zombie’s Lords of Salem and The Amityville Horror: The Lost Tapes.

How did you go about developing a new story for Paranormal Activity 3 that would give the fans something new, while staying true to what was established in the previous films?

We asked ourselves that exact question before we started, and [screenwriter] Christopher Landon was really the driving force behind the new story. We also asked ourselves what questions the fans asked most and were left with after seeing the second movie, and guided the third movie in a direction that would answer those questions.

What led you to choose Catfish’s Henry Joost and Ariel Schulman as your directors?

Given the debate around whether Catfish was real or not, they were obviously very adept at shooting things like that. And part of the experience as an audience member of a Paranormal Activity movie is letting yourself be allowed to at least think what you’re seeing is real for 75 minutes, and they did a great job with that. They brought a lot of authenticity to the movie.

You shot Paranormal Activity 3 this past summer and had to have it out by Halloween. How much pressure was involved with such a short schedule?

It definitely put pressure on us, but happily, we had a lot of tools, and these movies are not, production-wise, very complicated. So we can cover a lot of ground with not a lot of days.

Were there any particular challenges given that two young children have prominent roles?

When you’re shooting with kids, it’s always harder because your days are shorter. And we had to be sure the parents were really on board and understood exactly the situations the kids were going to be in, because it was important that they were never really scared. Luckily, our directors were good at getting the kids and everybody around them comfortable with that.

How did you initially get involved with Paranormal Activity?

The first movie was sent to me in rough-cut form as a director’s sample by CAA. When I was in acquisitions, one of the movies I managed was The Blair Witch Project, and when I watched Paranormal Activity, while I never imagined it could be as successful as it was, I certainly thought it had an amount of theatrical life in it. So instead of hiring Oren to direct something else, I said, “Let me team up with you and see if I can get this into a theater.” It was a 26-month journey from that point to Paramount releasing it, and they did a terrific job.

With so many found-footage horror movies coming out in the wake of Blair Witch, what do you think made Paranormal Activity stand out from the crowd?

I think it was what Oren brought to the first movie, which is that it’s a very simple idea, and doesn’t try to cover too much ground. He paid a lot of attention to making it feel authentic. Although the found-footage approach certainly makes some parts of production easier, it adds a lot of challenges creatively. You always have to answer the question, “Why are they shooting this? Why would they be filming?” And Oren answered that very well in the first movie.

When you and the rest of the Paranormal team were developing the second and third films, did you intentionally plant clues in them that would lead audiences to want to see another film, and have those questions answered?

We really didn’t. It’s hard enough to come up with stuff that’s fresh for the new installment, but to try and think two down the road… We really just try to create one story at a time. And when the next one comes up, it doesn’t just play off the content of the [previous] movie but also what people said about it. That helps guide the process of what will be next.

They’re atypical studio movies, and as a result of that, the fans are not only important to their success, but as we’ve listened to them, they have become a bigger part of the creative process. That has to do with the fact that the movies are very unusual when it comes to studio genre releases.

Do you think there’s more territory to explore in a fourth film?

For sure. Paranormal 3 answers a lot of questions and raises a lot more, so should we be lucky enough to go back a fourth time, that would be great.

You reteamed with Oren Peli to do Area 51 a little while back; is that film finished at this point?

Not yet; we’re still working on it. We did many reshoots on the first Paranormal—though I should put “reshoots” in quotes because it was constantly calling Katie Featherston and Micah Sloat and going to San Diego and shooting for an hour and a half. Like I said, the first Paranormal came out almost three years after Oren first shot it, and there’s been a lot of back and forth on Area 51 as well—and when you’ve got the Paranormal sequels in the middle of it, it certainly slows things down. So we’re still tinkering with that movie.

Can you say anything about the storyline?

Not yet, mum’s the word on that right now.

Did Peli approach it in the same found-footage manner as Paranormal?

I would say it’s kind of a found-footage style, on a bigger scale with a bigger scope.

Is it difficult to maintain that sense of reality on a larger-budget film?

Yeah, in a way it is. The bigger a movie is, the more areas there are for people to say, “That doesn’t feel real.” When it’s two people in a house, it’s much easier to make it feel authentic. When you start adding additional characters and additional locations, that makes it more challenging.

Presumably, since the movie is about Area 51, there are aliens involved; without giving too much away, are all the FX practical, or does this one get more into CGI?

Very little. We’re trying to keep the effects as practical as possible. But like I said, we’re still tinkering, so if I told you anything specific on that one, I might wind up contradicting myself.

You recently produced Insidious, which had a similar approach and made very impressive use of almost all practical FX.

Yeah; when you’re working with a lower-budget model, you can’t compete with what the studios do with special effects. They do it very well, and it’s really costly. If you start going into CGI stuff, you’re going to be compared to people who have many more times the money you have, and it never looks good. But James Wan and Leigh Whannell are super-creative and did a terrific job; they deserve a ton of credit for that movie. They worked very inventively on a very tight budget.

Insidious is very different in style from the Saw films they first made their names on. When you worked with them on Insidious, did you sense a conscious attempt on their part to change things up?

One hundred percent. James is a massive horror aficionado and fan, and wanted to experiment with a different kind of horror from the start. To scare people without being gory was something he set out to do with Insidious, for sure.

How about Rob Zombie on Lords of Salem; is this going to be as brutal and gruesome as usual from him, or is he taking a similar change in focus?

No, we’re not veering from the Rob Zombie brand of horror. There’s going to be lots of red on the screen.

How did you get involved with Lords of Salem?

I have a model for making lower-budget genre movies, and I approach people whose movies I’ve liked. I approached Rob while we were doing Insidious and he had a very original idea, so I said, “Let’s make a deal.”

How closely does Lords stick to the historical facts of the Salem witch trials?

You’ll have to decide when you see it. That’s up for debate, what actually happened in those trials.

You’re working with a typically fun Rob Zombie cast of regulars and genre veterans. How has that experience been?

Great. One of Rob’s strengths is casting terrific actors, and one of the great things about doing these movies with low budgets is that you can use talented people, and if they’re famous, that’s cool, if they’re not famous, that’s OK too. So we allowed Rob to cast whoever he wanted to work with.

How much creative freedom is he being given on this film? Is he pretty much doing his own thing?

You’re also producing Sinister, directed by Scott Derrickson with Ethan Hawke starring, about a journalist who uses found footage to solve a mass murder. Is it being shot in the found-footage style?

No, it’s traditionally told. And it will be creepy, I can promise that.

What’s the status on Amityville Horror: The Lost Tapes? It was originally announced by Dimension as a January release, but now it’s undated.

We’re still in development on that one.