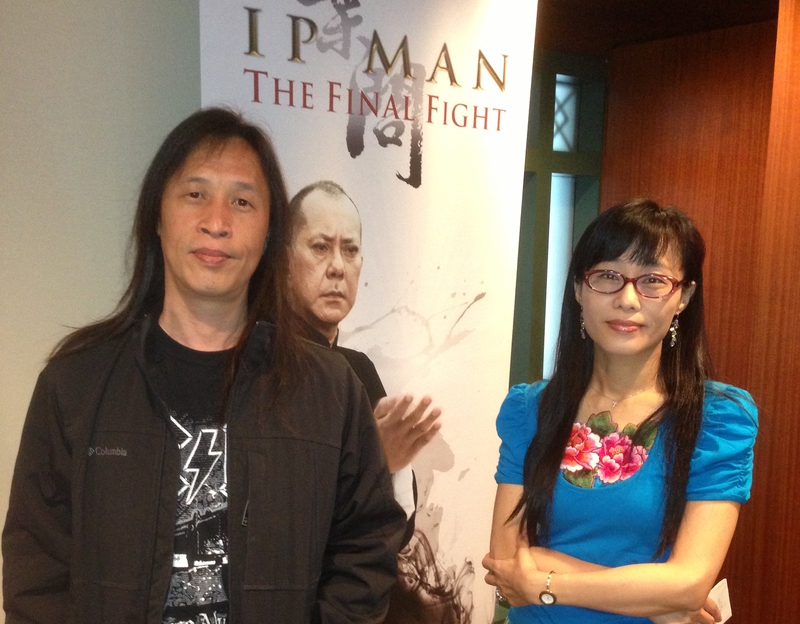 Editor's Note: This was originally published for FANGORIA on July 8, 2013, and we're proud to share it as part of The Gingold Files.

Director Herman Yau is well-known to Asian-horror fans for his notorious Category III pictures The Untold Story and Ebola Syndrome from the early/mid-’90s, though he has made dozens of films in many other genres since then, including a pair of new martial arts movies featuring the legendary Ip Man. While visiting the New York Asian Film Festival, Yau and screenwriter Erica Li chatted with Fango about those actioners, as well as the director’s return to extreme horror.

Ip Man was a real-life grand master and teacher of Wing Chun kung fu whose students included Bruce Lee, and whose life has been dramatized in several films and TV shows, most notably a pair of features starring Donnie Yen. Yau first tackled the subject in 2010’s The Legend Is Born: Ip Man, which dramatizes his life in old-fashioned cinematic style with plenty of impressive fight sequences and stars Dennis To, an award-winning wushu artist who had small parts in the Yen films. This year saw the release of Ip Man: The Final Fight, about Ip’s later life, with a heavier dose of sociopolitical drama and HK veteran Anthony Wong (star of Untold and Ebola) in the title role. Both feature appearances by Ip’s real-life son Ip Chun, who continues the family tradition in fine form even in his 80s, and also served as a consultant.

Did you have any reservations about tackling Ip Man, whose life had already been explored on film a few times?

HERMAN YAU: I think it’s good to have a diversified treatment or approach to a subject, because a man, a figure or even an incident should be free for an artist to interpret them in different ways. Just like, and I’ve mentioned this before, [martial arts folk hero] Wong Fei-hung in Chinese cinema; they’ve had over 100 films or TV shows on him, but as an audience we still welcome Wong Fei-hung, and in fact I’m planning now to make a Wong Fei-hung movie. It’s just like in the world cinema with Star Wars, Spider-Man, Batman. It wasn’t any kind of hindrance to my decision to make another movie about Ip Man.

Erica, how did you approach writing the two sides of Ip Man in each film?

ERICA LI: It was all about making him human, because each person has different stages in life. The Legend is Born is about Ip Man growing up, just like Superman in Smallville; he’s budding and young, but he’s struggling to grow up and be more mature. The Final Fight is about the later stage of his life; [filmmakers] don’t do much on the subject of older heroes, and it was very challenging to explore his more mature days.

Can you talk about casting Ip Man in both movies? You had a relative newcomer in the first one, and then longtime collaborator Anthony Wong in the second.

YAU: For the first one with Dennis To, it was an assignment, and the film company had a contract with him. So when I took on the project, I already knew they were going to put in Dennis To as Ip Man. I talked a bit with Dennis, and he’s an expert in martial arts—not only in Wing Chun but in other schools—but as an actor he was so green. So I just took that as part of the challenge for me as a director—how to have someone with so little experience in acting come across on the screen.

For my second one, some people have said that Anthony Wong’s appearance is not so much alike to the real Ip Man, but from the pictures I’ve seen, I feel in some ways that they share similarities, so that’s why Anthony was my first choice. But Ip Man: The Final Fight, while not a megaproduction, was not a low-budget production either, and I worried whether the investors would endorse Anthony to carry a movie with this budget. Fortunately, they accepted that Anthony is a very good actor who could deliver a different portrayal of Ip Man.

Given Wong’s track record, it’s surprising that anyone would doubt he can carry a film at this point.

YAU: Well, it’s rather like when I made The Untold Story; at the time, [the Category III shocker] Dr. Lamb had been kind of a blockbuster, so the producers [including Danny Lee, who co-starred in both movies] said they wanted to use Simon Yam from that film as the lead. But I felt I would rather cast another actor who could bring something new to the audience. Whenever I direct a film, I try to achieve something fresh; if I used Simon Yam, it would just be a succession, and not my own achievement. So luckily, Danny Lee said yes to Anthony. This time, it wasn’t as risky as 20 years ago, because everyone acknowledges that Anthony is a very good actor; the only issue was his salary, but I’m not the one to deal with those kinds of matters. In the end, Anthony came on board.

Can you both of you talk about working with Ip Chun as a consultant and an actor?

LI: I talked to him before the script was written and also during my time on the set; I asked a lot of questions, and he was very nice. He told me so many details about his father, like the way he smoked—how he’d collect the ashes in his palm—and the way he would sit, cross-legged like a gentleman. The one thing he wouldn’t answer directly was, “How was your parents’ relationship?” He said, “I’m their son, so I’m not at liberty to answer that question.”

YAU: The Legend Is Born wasn’t the first appearance of Ip Chun on the screen. He appeared in an old Cantonese movie, also about Bruce Lee, but that was a cameo appearance; it wasn’t a leading role or anything like that. He’s not shy about acting, and I believe he has greater potential. In the case of The Legend Is Born, he had more acting potential than Dennis To [laughs]. In fact, Ip Chun got the Best Supporting Actor award at the Shanghai Film Festival for The Legend Is Born.

And now you’re getting back into Category III horror?

YAU: Yes, I just finished a movie that will probably be categorized that way, but of course, I didn’t set out to make a Category III movie just for the sake of making it. But if the content goes so far that the censorship officials categorize it that way, I don’t mind. It’s the kind of response I welcome. The title is The Second Coming, and it’s about a woman who had an abortion and thought it was a failure—but actually, it halfway succeeded because there were twins. So after 15 years, bad things start happening. It’s coming out probably at the end of this year, or early next year.

Can you talk a bit about what might put The Second Coming into Category III?

YAU: Well, one of the cast said that it’s the first time in his acting experience that he cut the penis off a man, and later, a doctor eats the penis.

LI: And it’s in 3D, so you can see the genitals coming at you!