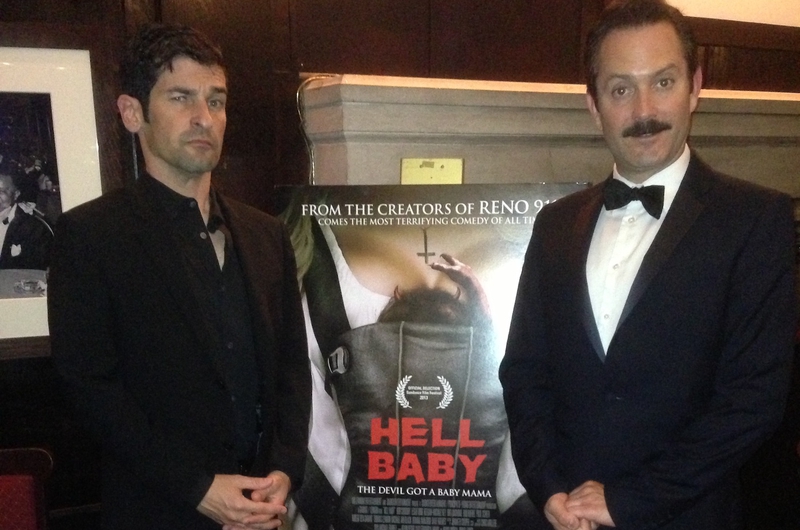 Editor's Note: This was originally published for FANGORIA on September 6, 2013, and we're proud to share it as part of The Gingold Files.

When Thomas Lennon and Robert Ben Garant write major movies, it’s often all-ages entertainment like the Night at the Museum adventures and The Pacifier. When they write, direct and act together in smaller projects, the results tend to be much edgier and more adult, as in TV’s Reno 911! and the new horror/comedy Hell Baby, which they discuss with Fango below.

Released by Millennium Entertainment, Hell Baby follows Jack (Rob Corddry) and his very pregnant wife Vanessa (Leslie Bibb) into a rundown new home in New Orleans. Amidst visits from such oddballs as overly solicitous neighbor F’resnel (Keegan-Michael Key in a scene-stealing turn) and a zombielike old lady, Vanessa becomes taken over by a demonic presence residing in the house, which drives her to strange, violent behavior and threatens to result in the eponymous birth. The solution: Call in Vatican exorcists played by Lennon and Ben Garant themselves. The film also stars the Last House on the Left remake’s Riki Lindhome (who has a lengthy, very funny nude scene) as Vanessa’s New Agey sister, along with Rob Huebel, Paul Scheer and Michael Ian Black. Fango spoke to Lennon and Garant at a special screening held in New York’s Friars Club.

Beyond a few nods to The Exorcist, Hell Baby doesn’t spoof specific scenes from particular films, but is rather a sort of blanket satire of the genre. Was that intentional, given the number of parody films in the last few years?

ROBERT BEN GARANT: Yes, it uses the whole genre rather than a specific film. There are so many “young couples move into a place and they think it’s haunted, and it is” films, and we used those as a jumping-off point, really.

GARANT: We’re both big horror fans, and we liked the idea of making a movie in a big, creepy house, like The Orphanage—doing a comedy that looked like that, that had those colors and everything. We loved The Orphanage, and a movie of that type stocked with goofballs was a very exciting idea for us.

You’ve obviously had success writing family-oriented films, and Hell Baby is just as obviously not one of those. Is this movie more in your comfort zone?

LENNON: What’s weird is, we never really change our sensibilities based on what we’re doing. The jokes in Night at the Museum are 100 percent our sense of humor, and a long nude scene with Riki Lindhome is also exactly our sense of humor. We never make a huge shift in our thinking; it just happens that we have sort of eclectic tastes.

LENNON: Yeah, [their sketches from MTV’s The State] “Porcupine Racetrack” and “Eating Muppets” have the same tone, where it’s like, “Hey, we’re all going to be very serious, but you know, what we also do is eat Muppets.” Sincerely stupid seems to be our wheelhouse.

How was Hell Baby born?

LENNON: This project came about, in no small way, after Reno 911! got canceled, because that was sort of our security blanket. When working on big-studio pictures, you sometimes want to have an outlet that doesn’t take years to produce.

GARANT: And do your own thing. Like with Reno 911!, you can tell they weren’t bossing us around and saying, “Do this, don’t do that.” So we were throwing cats in blenders and doing everything we thought was funny. When it got canceled, we started talking about doing a new TV show, and then we both thought, “What if we took that and tried to do a movie? Let’s do a little indie film that has the same vibe and would just be us and our friends, done cheaply.” And it worked! We wrote it, and the first people who read it gave us the money; there were no notes, and they let us hire anybody we wanted. It was just great.

LENNON: You can probably tell that we weren’t noted to death on the movie, because it’s mostly tangents. A lot of tangents.

GARANT: Which was nice, and really refreshing.

How important was it to tell a story while going off on those crazy tangents?

LENNON: The story was not very important, as you can probably tell. We don’t really go in depth. I think F’resnel tells the characters’ backstories in, like, about one second. He says, “Well, look at you! You’re a Ph.D candidate at Tulane and you’re an occupational therapist!” End of backstory.

GARANT: Hell Baby is a movie that, if it was made by a studio, would have so many scenes painting the couple into a corner as to why they can’t move out. There’d be so many scenes like, “Well, you’ve got to show that Jack hasn’t worked in a year! You’ve got to say that she’s tired of him giving up on things! It’s got to be about their relationship!” I think you can tell nobody was giving us those notes, so it was just one joke to the next. Robert McKee probably won’t think our structure is correct, and it defies every rule in that book.

Were all of the characters written for people you know, or were some left open for actors to come in and make the roles their own?

GARANT: More than anyone, F’resnel—that role was written for Keegan-Michael Key. If he had said no, or if he hadn’t been available, we wouldn’t have done the movie, because it was written for him to come in and do that thing he does. We wrote it in his voice very specifically.

LENNON: There were certain things only he could say.

GARANT: We knew we would be the priests. We had never met Leslie Bibb, but she read the script and called us, and we met her and she loved it. It was really cool, because you can tell she’s funny in movies, but she’s a real actress actress.

GARANT: Yeah, and to have someone that serious put so much thought into the movie—she might have thought about Hell Baby more than we did.

LENNON: Without a doubt. I saw her notes on the script, which seemed like way more than I thought about the movie.

GARANT: Rob Corddry we’d known, but never worked with. When we heard he wanted to do it, we were very excited.

As far as acting and directing at the same time goes, do you have that down to a science now?

GARANT: Reno 911! was very interesting because we’d direct it while we were in it, and there was no script. So we were steering it in character on set. When you watch it, you’ll see Tom and I going, “Sir, can you say that again? Sir, you’re going to need to slow down, stand over there and repeat that.” We were being cops, but we were directing it. Compared to that, this movie was kind of easy.

LENNON: Oh my God, it was so easy.

GARANT: It was fun. The biggest challenge was money.

LENNON: We did go fast.

LENNON: Most movies are in the 40-plus-day range. We had half of that, and you can tell in every shot.

GARANT: It was doable because the cast was so great. They were so funny. The first takes of everything were great, and some of them are in the movie. We didn’t have to get it out of everybody. We hired people to do what they do, and got out of their way and let them do it.

GARANT: They know how to improv from their shows, so they know how to edit themselves on camera, so they’ll do a crazy improv, and they’ll flub it, and everyone will know that we can go back and reset and do it again. So there was a lot of communication we didn’t need to have, and we didn’t need to do a lot of stopping and starting and removing people, because everyone’s been in an editing room with their own comedy before.

LENNON: It was like having our own comedy supergroup.

Was Riki Lindhome’s role written for her, and if so, was it awkward writing and pitching her the character’s lengthy nude scene?

GARANT: Tom had to talk to her…

LENNON: It’s hard to ask your friend to do something like that, because it’s a pretty weird conversation. Riki and I have been friends for quite a long time.

GARANT: But there was no getting around the facts, which were, “I’ve written this thing where you’re naked for a long time. I want you to do it.”

LENNON: “You’re going to take off your clothes, and I’m going to film it.” It’s as weird as that. The only thing that wasn’t weird about it is that she’s a amazing sport—with, obviously, a terrific figure, and very funny and lovely.

GARANT: And she’d done it before, which took the pressure off. She was like, “Oh yeah, sure!”

LENNON: Yeah, she already had a Mr. Skin category devoted to her, I believe. The weirdest part is just, as an adult, turning to your friend and saying, “I want to take off all your clothes just for a minute, cover you in oil and take you to New Orleans. Is that weird?”

GARANT: As soon as Tom started saying, “There’s an aspect to the role that’s interesting…” she was immediately…

LENNON: She was like, “Is it nudity? I should have known…” And I realized, it wasn’t weird that she picked up on it so fast; it’s weird because guys are obviously always pitching her the idea of taking off her clothes.

GARANT: It must happen to her all the time. I’ll bet guys at Starbucks pitch that to her.

Was it challenging to do the required FX on such a short schedule?

LENNON: We never really did them! I’ll say two things: The effects are terrible, and I love them. It’s the weirdest combination of, as soon as that awful baby arrives, which I know does not look great, it’s my favorite scene in the film.

GARANT: I love it. We had four different puppets and they were each supposed to do something different, and none of them worked at all. But it’s great!

LENNON: To me, that’s when the movie really becomes its thing, when our faces and balls are being bitten by the monster baby.

GARANT: I just love that we did old-timey, Rick Baker, build-a-thing-and-make-it-work effects. That was really interesting and fun. It was the longest part of the shoot, though. It was like, three days for the baby fight, which was the closest to the actual hard work of moviemaking that we did. The rest was just comedy, three straightforward setups. But the cast, by that time, had really bonded and helped make it work. Everyone was prepared for three long days, covered in blood, so it was fun.