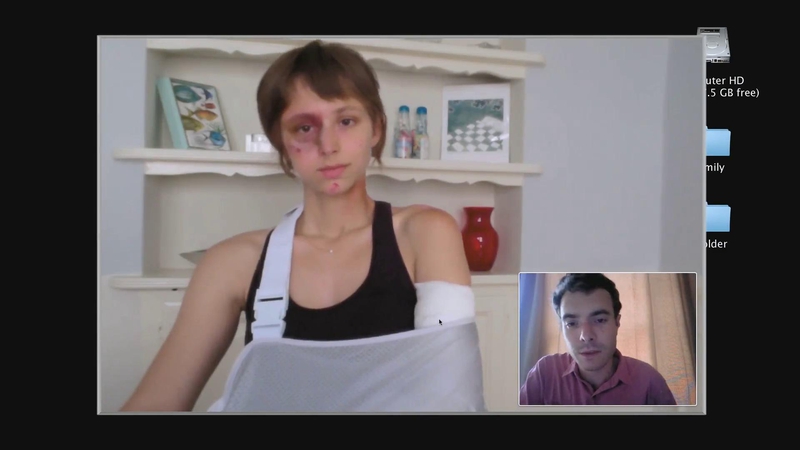 Editor's Note: This was originally published for FANGORIA on December 4, 2012, and we're proud to share it as part of The Gingold Files.

All kinds of sick things happen to the characters in the multipart horror feature V/H/S, but perhaps the worst is “The Sick Thing That Happened to Emily When She Was Younger” in Joe Swanberg’s segment. Fango spoke to Emily herself, actress Helen Rogers, about the experience.

“Sick Thing” consists of a series of Skype conversations between Emily, who believes there’s something haunting her house, and her boyfriend James (Daniel Kaufman). As her fears grow despite James’ best efforts to calm her down, glimpses of strange figures in the background lead to a very disturbing revelation about what happened to Emily in her childhood—and what’s happening to her now. Rogers talked to us on the set of Jack Attack, a Halloween-themed short film directed by Bryan Norton and Antonio Padovan that she lensed recently in Brooklyn.

Because of the way “The Sick Thing” is presented, the camera is right on you the entire time. Did that take some getting used to?

Well, one thing I really appreciated about the process was that we actually used Skype, and were speaking to each other live on computers. That really helped me, because there are so many weird snags on Skype—like sometimes, you freeze up on the other person’s screen, and you can never really know if you’re looking totally fluid to them. Also, the eye-contact thing is really weird, because if you look into the camera, it appears, to the other person, like you’re looking at them, but if you do that to create that effect for them, you’re not looking at a person. It’s a strange disconnect that was really helpful in building that relationship with the character.

One of the most challenging parts must have been working with the makeup FX live, as it were; there are no cutaways, for example, when you’re digging into the wound on your arm.

Lino Stavole was the makeup designer, and he blew me away with how impressively talented he was. He made it really easy for me; he made me a little skin pocket out of liquid latex, so it wasn’t any problem for me to go in there and dig around. I was thinking about how much I was willing to scratch at my arm, and thinking about how I was going to do that with no makeup, and then I showed up and there was this genius makeup guy there. He also built a mold of his wife’s back that we used in certain moments.

When it came to the specters that appear throughout the segment, did you always know when they were going to pop up? Or did part of the process involve them emerging at times you weren’t expecting them?

It was somewhere in between, because it was somewhat choreographed. But, for example, that first moment when the actor ran in and shut the door, I wasn’t facing the door; so there was always an element of surprise, because I couldn’t see him coming and it always did startle me a little bit. Of course, I knew that I was going to be surprised, but…

In terms of your relationship with your co-star, Daniel Kaufman, did you work with him at all beforehand, or just let everything happen live while you were shooting?

That’s a really interesting question. I didn’t work with him beforehand, because he lives in LA and I live in New York. I met him, like, the day before we were supposed to shoot, and we all went out to get drinks. Then, every day we filmed, Joe would text me, “Are you ready? Can you be ready in an hour?” And he’d drive over and pick me up and we’d go get Daniel, and then we’d have a long lunch somewhere, drink beer and have good food and just hang out. Then we’d go to the apartment, hang out more while it was set up, wait for the light to change and shoot something, then wait for the light to change again and shoot something else. It was hardly any shooting time, really, but at the end of the day, I always felt like I had worked an eight-hour day. And a really essential part of the preparation was to be able to… I’m looking for a better word, but what’s coming to mind is “vibe.” To find a vibe between us that was genuine.

How many days overall did you shoot?

How many overall takes did you do? Were they all shot as we see them, or are there invisible cut points in some of them?

There are some invisible edits, but we didn’t do that many takes. We’d shoot a few, and Joe would get one he liked and say, “Great, moving on.” The DP would say, “Joe, do you wanna watch the footage?” And Joe would go, “Oh yeah, oh yeah!” But he works in a way that’s very fast. I had a really pleasant experience on V/H/S; it took a lot of energy, but none of it was wasted.

Was it a different kind of energy, being that you couldn’t move around as much, since you had to stay in this frame you’re sort of trapped in?

You know, I never thought about that, because I was speaking to Daniel as my boyfriend—so he was my focus, and I was trying to get things out of him.

You had to get into some very vulnerable emotions while playing Emily. Were those difficult to conjure up?

It’s hard for me to articulate exactly what my technique is. I went to acting school, and then I wasn’t in acting school, and it’s hard for me to pinpoint exactly what it is that triggers those emotions. I guess I think of it as a space—a mental space or an emotional space. I was thinking about how it might feel to break up with someone I loved, which put me into that space. One thing that helped me was the really long takes, and the fluidity that gave me. A lot of times in film, you do 30 seconds of this, this and that, and then the director essentially sculpts your performance. But Joe allowed those takes to just be long and simple, which let me build up emotionally.

How did you feel when you saw the whole movie put together? I’m assuming you were unaware of what the other filmmakers were doing.

I knew they had done other things, but I didn’t know what they were going to look like. And it was a really wild ride! I had a lot of fun watching it.

Tell us about your part in Jack Attack.

I play Elizabeth, a babysitter. It’s Halloween, I wish I could be out with my boyfriend—I’m angry at him for not showing up—and then it goes horribly, horribly wrong. A babysitter’s worst nightmare is what I’d call it.

Jack Attack is another short project; is it a challenge in general to develop a character in a brief amount of screen time?

Well, in V/H/S I felt like I had a lot of screen time, and also, since I graduated from college, the films I’d been making were all shorts. So that was the medium I understood the best; actually, it’s probably easier for me.

Are you a horror fan yourself?

Not yet, but I’m curious! I’m trying to think of my favorite… I remember seeing The Blair Witch Project when it came out, and being really scared. Actually, this past year I saw Rosemary’s Baby for the first time, which totally knocked my socks off. It was just like, “I can’t believe I haven’t seen this yet!”