Q&A: Gemma Arterton On Vamping For Neil Jordan In BYZANTIUM 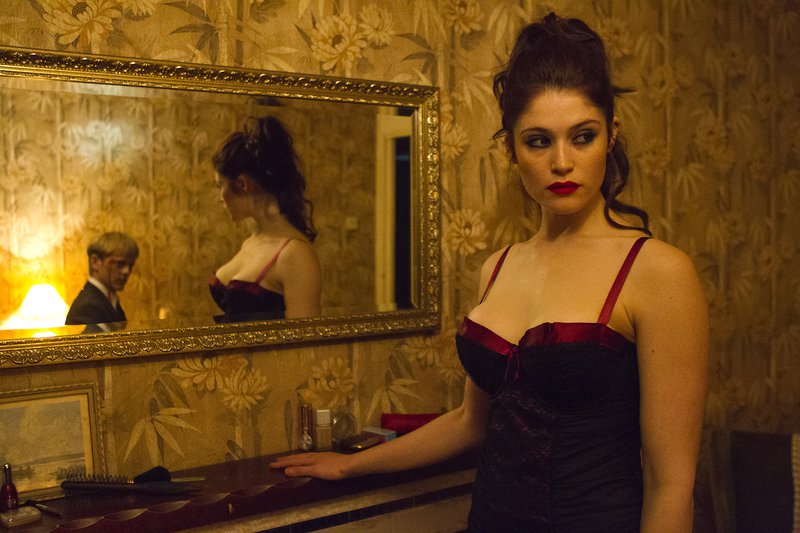 Editor's Note: This was originally published for FANGORIA on June 28, 2013, and we're proud to share it as part of The Gingold Files.

It was only earlier this year that we saw British actress Gemma Arterton as one half of a supernatural exterminating team in Hansel & Gretel: Witch Hunters. Now she’s on screen in an equally lethal role on the other side of the occult equation, starring opposite Saoirse Ronan in Neil Jordan’s vampire variant Byzantium.

The film casts Arterton and Ronan as Clara and Eleanor, mother-and-daughter bloodsuckers perpetually on the run from an enclave of male vampires who seek to destroy any threat to their patriarchy. Settling in the titular hotel in a rundown seaside community, Clara enthusiastically preys on local men while the more sensitive Eleanor, desperate for emotional connection, begins to bond with a sickly young man (Caleb Landry Jones). Scripted by Moira Buffini from her play A Vampire Story, Byzantium is a moody horror/drama that boasts lush photography, a number of startlingly visceral moments and strong performances, led by Arterton as the ruthless yet protective Clara.

Was it an interesting experience going from a character who hunts supernatural creatures in Hansel & Gretel to playing one yourself in Byzantium?

Yeah. It felt much more humane, considering we were supernatural characters, and being the villain and the dangerous one was quite fun. It helped that I had quite a lot of experience with stuntwork from Hansel & Gretel, so when it came to filming Byzantium, I was pretty much in the zone, physically. In the original script, Clara was just this sexual kind of predator, and I wanted her to be much deadlier, so I ended up saying, “Neil, why don’t we do this chase scene, and why don’t I do it myself?” And Neil was like, “Yeah!” So she became very sort of overwhelming—both powerful and sexual at the same time. I loved every minute of that.

How important was it to you that Clara have a certain amount of sympathy, in the way the audience views her? Or was that not even a concern?

No, it was a concern. She’s not the heroine, but we have to know she’s also… There’s been talk about this being a feminist movie, but I’ve always said, “No, it’s not, really,” in that she isn’t a good person. She kills people, she’s a prostitute, she manipulates people, but at the same time, she has this unparalleled love for her daughter and she herself has been totally abused. So it was important that we like her, and at the beginning she’s funny and quite charming, but then she becomes totally ruthless. That was important for me, because the heart of the story is the mother and daughter. It’s about that bond, this lioness kind of thing that’s inspired by a memory I have of my mother protecting my sister. We were in this council estate that was a bit dodgy, and my sister was in a fight. And I remember my mum ran down the street and pulled these girls off of her, and put her arms around her, and I was like, “Wow.” I was so impressed by that, what a mother would do to save her child. That’s such a strong impulse, so it was important that it was there.

Although Clara is Eleanor’s mother, they appear so close in age that they seem more like sisters. How did you approach that dynamic in working with Ronan and Jordan?

Well, Saoirse and I naturally had a good chemistry, in that we could banter with each other, which is kind of a sister thing. My own upbringing was very similar, in terms of having a sister I was like a mother to, who was three years younger than me. [Clara and Eleanor] kind of felt like that relationship, and Saoirse and I would speak about that. Saoirse doesn’t have any brothers or sisters, so she was very open to me recounting my experiences. We didn’t have to do much to bond; we just naturally had this chemistry. Saoirse’s such a perceptive person and very open, so she was willing to kind of… If I wanted to play with her hair, or to hold her, she wasn’t afraid of it, and didn’t feel like, “Oh, you’re condescending to me or patronizing me.” She was willing to go with me, so that was great.

You’d previously worked with Moira Buffini on 2010’s Tamara Drewe. Were you familiar with A Vampire Story before it became Byzantium?

I wasn’t, no. I didn’t know anything about it. Funnily enough, when we were shooting Tamara Drewe, we were having dinner, and I asked her, “What are you writing?” She said, “I’m writing a vampire play,” and I was like, “Why? It’s such a tired genre.” And she said, “No, no, no, this one’s really cool, and there’s this great character in it called Clara.” I remember her talking about this sort of “fuck you” heroine, and then just disregarding it. But it’s definitely something that is known in the amateur dramatic world, because it’s a good play for younger kids to do, so it’s out there in schools and things like that. Actually, Stephen Woolley, our producer—his daughter was in the play, and that’s how he heard about it, and then he tasked Moira with making it into a film script.

Was Buffini on the set? Jordan has said she did rewrites to punch up the horror elements.

Absolutely. She was very much present. She was fascinated with being on the set. She used to be an actress, and she has started directing now, which is excellent—I used to be like, “You must direct!” She’s so good. And it was important for us that she was there, because the language is very specific—you know, Clara and Eleanor are 200 years old. It’s very subtle, especially for Eleanor, the types of words she chooses to use. It was very thoughtfully done, and Moira was very collaborative in that way.

You mentioned the two women are 200 years old, and one of the interesting things the movie deals with is the tension between the way they look and their experiences. Clara seems to have been arrested emotionally from the time she was turned—she carries a hatred of men that she has never grown past, and still consumes her. That kind of defines her personality.

Yeah, she doesn’t trust anybody. She has put everything into her daughter, and even though it’s a vampire story, it’s so symbolic of controlling-mother relationships. Eleanor really gives Clara a raison d’etre, and if she didn’t have her daughter there, I think she’d just go crazy. She’s always moving, always traveling, and doesn’t know how to operate in the world other than the way she has for 200 years. Actually, Neil and I spoke about, “What else has she done? Has she always been a prostitute? She’s also been a dancer. She’s also been a singer. She worked in clubs. She’s been a gypsy.” I believe she does what’s quickest and easiest—what she knows she can do. So when people say it’s feminist, I say, “Oh, no, it’s not! She’s not a feminist, because she hates men so much. That’s not what the feminist movement is about.”

Was playing a vampire something you had thought about before this project came along?

No, not really. I’ve always loved the old, really old vampire movies, and the kind of hammy ones as well. But I never really think much about the types of roles I’d want to play. And it was nice to portray a vampire who isn’t the typical kind, whom we got to make quite human. We didn’t have to do that whole [imitates snarling] thing, and Neil was like, “I don’t want you to have fangs, because I think that’s really ugly. We’ll just do this thing with your nails [that extend into talons to shed blood].” In fact, Neil doesn’t like calling them “vampires”; they’re known as “sucreants.”

How was your collaboration with Jordan in general?

Oh, I loved every minute. I’d been desperate to work with Neil since I was 16. I watched The Company of Wolves, and that’s the kind of film I love. At first, I was quite nervous, because of the way he is. A lot of directors are rather bizarre people in real life. They’re kind of…autistic in that way [laughs], I guess because they have to be able to see everything and pay attention to details. But we developed this great relationship, because I’m such a physical actor and he was very, very impressed by that and encouraging about it. We ended up having a lot of fun. He truly loves actors. I think he finds them fascinating, and he enjoys the emotional stuff, and how we get there. As a director, he’s very much about, “Cast it right”; he’ll talk about a scene, but then he lets the actors do whatever they want. He’s very, very playful and open. You can tell from his previous films that he lets the actors try stuff out.

You shot Byzantium on some beautiful locations. How did that inform the performances?

Very much so. The ones that spring to mind are, obviously, the west coast of Ireland, which is so epic and absolutely stunning. I mean, that waterfall… I remember when we were shooting that, it was my birthday, the 2nd of February, and it was freezing, freezing, freezing, but exhilarating at the same time, and you really felt like you were in the midst of nature. That’s another thing I loved about this film: There are these two sides to it. There are grotty, dilapidated cityscapes and human areas, like the seaside town and the hotel—you know, like the lapdancing club and all that is really sleazy and gritty. Then there’s this gorgeous abundance of nature and beautiful imagery, and an “epicness” and richness to the film. That totally inspired me.

The seaside town was something that was important for us to get right. It was actually Hastings, in the south of England—not far from where I grew up, actually. It’s a beautiful place, with that old, burned-out pier. You could tell that during Victorian times, it had its heyday, but it’s so sad now. And that’s symbolic of the characters—they’re so sad.

There’s been talk of a Hansel & Gretel sequel; have you been privy to any of that?

I haven’t heard anything about it. I know that the film did very well, and I’ve heard that another one might happen, but Jeremy [Renner] and I haven’t been approached about anything. Watch this space, I guess!