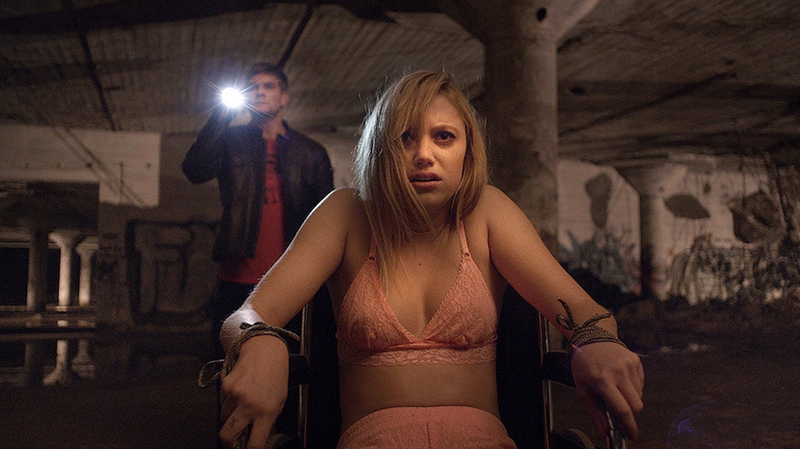 Editor's Note: This was originally published for FANGORIA on March 12, 2015, and we're proud to share it as part of The Gingold Files.

David Robert Mitchell has his finger on the pulse of American young people—and in his second feature, It Follows, he makes it race. FANGORIA spoke to the writer/director about his truly frightening new film.

It Follows stars The Guest’s Maika Monroe as Jay, a 19-year-old girl in a typical suburb whose first sexual encounter has a horrifying aftereffect. She has inherited a sort of curse in which she is relentlessly stalked by an evil presence that takes different human guises, and won’t stop pursuing her until she sleeps with someone else, thus passing on this bizarre haunting. Shot with the chilly precision of great late-’70s/early-’80s fright films (with a terrific synth score to match by Disasterpeace) but very much its own movie, It Follows explores the much darker side of the coming of age Mitchell previously addressed in his acclaimed debut feature The Myth of the Amerian Sleepover. In this picture, however, no one sleeps…

It Follows kind of literalizes the sex = death theme that’s been read into many horror films of the ’80s. Was that a key idea for you in conceiving and making the film?

Well, I like the idea that it maybe tweaks that idea a little bit. It’s clearly aware of that, but I feel like it does more, in the sense that the characters basically open themselves up to danger through sex, but sex is also a way they are able to have some kind of temporary freedom—to push death away, at least for a while. I don’t think it’s invalid, but for me, it’s not that simple; it’s a little bit more complicated than that, at least in my preferred interpretation.

It definitely has a more interesting group of characters than you usually find in a teen horror film. Usually, the supporting kids are disposable, whereas in It Follows, they’re all true individuals.

Well, I like all these characters; they’re in there because I find them interesting. They all care about each other; they’re at that age where, when you’re a teenager, there’s often a point where you might keep a distance from your family a little bit, and your close friends become something of a temporary family. You know each other in a way that you don’t with your real relatives, more than any other time in your life. It’s a certain special moment, and I was trying to show that. It was not about creating somebody just so I could have them die. That was definitely not the motivation.

Would you consider It Follows a companion piece to The Myth of the American Sleepover?

Yes and no. There’s a certain amount of inspiration in It Follows taken from my first film, and when I finished the script, I shared it with my good friend and editor, Julio Perez IV, and when he finished it, I remember him being like, “Oh, I love it—it’s almost like a nightmare sequel to Myth!” We started laughing, and I said, “Well, I didn’t see it quite like that, but…” I do recognize that, yes, and there was a moment while putting the script together that I did imagine some of the types of characters I had in Myth aged up a little and thrown into a nightmare, and that was one of the ways in which I was able to construct it. They do share enough in common that it’s fair to say that It Follows does serve as a sort of companion piece, and that’s not a bad thing.

Also, regarding the Myth-It Follows connection, there is a little appearance by the lead actress from Myth in It Follows. Anybody who’s seen Myth will spot Claire [Sloma] in the movie; she’s the girl who’s smoking pot with Greg [Daniel Zovatto] in his car when Jay runs out of her house and gets on her bike. I wanted to put her in there, just for a moment; it’s a fun little cameo.

Are any characters or incidents in It Follows based on anyone you knew or anything that happened to you when you were that age?

Not really. It’s made up, though all the feelings these kids have are feelings I can remember and connect to. Anytime I’m writing a character, whether they’re anything like me or very different from me, I try to understand them and have sympathy for them, and to write from their point of view. There are probably little bits of me in there, but it’s not so clear, if that makes sense.

There’s a timelessness about It Follows’ setting and even the props; did you intentionally avoid grounding it in any particular time period?

Absolutely, yeah. There are a lot of production-design elements from the ’70s and ’80s, but also pieces from the ’50s and ’60s, and some modern things as well, and then some stuff that doesn’t quite exist the way we show it. That was just to suggest something that’s outside of time, and to approximate that feeling you have in a nightmare that you can’t quite put your finger on—that there’s something not quite right, but you can’t quite figure out what it is.

The stalkers in the film are all great, scary individuals. What went into casting those roles?

It was tricky, because each of the forms it would take was basically decided at the script stage, so it was all about finding the right people to fit those parts. Depending on the role, it was sometimes a little complicated and quite tricky. We spent a lot of time looking for everybody.

It Follows’ visual style seems informed by John Carpenter’s Halloween; was that movie a direct influence on yours?

A lot of people ask me that, and I’m a huge fan of Carpenter; I’ve seen Halloween a million times, and I love his version of The Thing as well. I’ve definitely studied his framing and his blocking, his staging of actors; I’ve literally watched his movies with just an eye on his compositions. But there are many filmmakers I did that with, certainly Alfred Hitchcock and Brian De Palma, so there is a genuine love there for that work. I was not necessarily framing shots thinking, “This is my Carpenter shot”—I don’t believe I’ve ever thought that—but I was certainly aware of the time we were placing this in, the kind of suburbs we were in. There are all these parallels, and clearly in the music, there are places where we certainly make reference, but it goes beyond that.

I guess that’s a long way of saying that I’ve watched those films enough that some of them have sort of burned into my brain, and that comes out. There are certain aspects that are very much in reference to Carpenter, and others where I think it just comes from appreciating and studying his work. And there are many more influences than just Carpenter; it comes from a lot of different filmmakers.

Even with those inspirations, It Follows stands as a true original, and it’s certainly something of a riposte to those who say good horror isn’t being made these days.

Well, I’m not one who thinks like that, though some people do feel that way. I look to the past for horror films I love as well, but I also love to see modern ones, and I do think it’s unfair to say we can’t make strong horror movies nowadays. There are people doing it. It may be a little bit easier to look to the past and go, “OK, there’s this one and there’s that one,” because you’re pulling them out of many years and many decades. Yeah, there have been high points, and times when we’ve had more good films than others, but it’s a genre people really care about, and they want it to succeed and to live, and I believe there will always by people doing whatever they can to try to create their own versions of it, to reinterpret it, to keep it powerful for people.

Do you yourself have any further horror projects in the works?

Not at the moment; I have other projects in different genres that I’ve written, but I don’t have another horror one ready. I would like to make another horror film, but I don’t think it’ll be next. The way I went from doing a coming-of-age drama to a horror movie, I would like to continue to move around, make many different kinds of films and explore many different kinds of stories. And when I have that idea, something I can do that’s really strong, I would love to go back to horror. I learned some things on It Follows, and honestly, making a horror film is very difficult. It’s tricky, and it would be nice to try to take some of those things I picked up on this movie and try to top it at some point. I just don’t know what that is yet.

One of the interesting parallels between It Follows and Halloween is that the most graphic act of violence appears in the opening scene, which sets up expectations and dread for the rest of the movie.

Yeah, 100 percent. I don’t have a problem with extreme gore or violence or any of that, if it means something within the film. It just didn’t seem to be the point of this movie. To me, It Follows is about waiting and anxiety and dread, and I felt that if we let people know what was at stake up front, we could build those feelings in other ways. I believe that violence and gore, at a certain point, can actually release some of that tension, in a way. Again, it’s debatable, but I just didn’t feel it was necessary for this particular movie.

Getting back to casting the stalkers, I wanted to ask about the very tall guy who makes quite an entrance in one scene.

Yeah, we needed the biggest guy we could find. He’s a great guy, and we actually found him pretty close to where we were filming. It was total luck that we came across him, he’s very effective in that scene and I’m very happy with the way it turned out, but it was hard to find someone of the height we were looking for. We spent so much time, and I was beginning to worry that we weren’t going to find him, and when we did, it was close to the last minute. I could be wrong, but I believe he may be the second tallest man in North America, or at least one of the tallest.

Were there any funny or awkward moments shooting the scene with the naked man outdoors?

[Laughs] Let’s just say we filmed that as quickly as we could! I don’t know how much I can say about it, but I don’t believe you can get a permit for that. I think you just have to act fast!