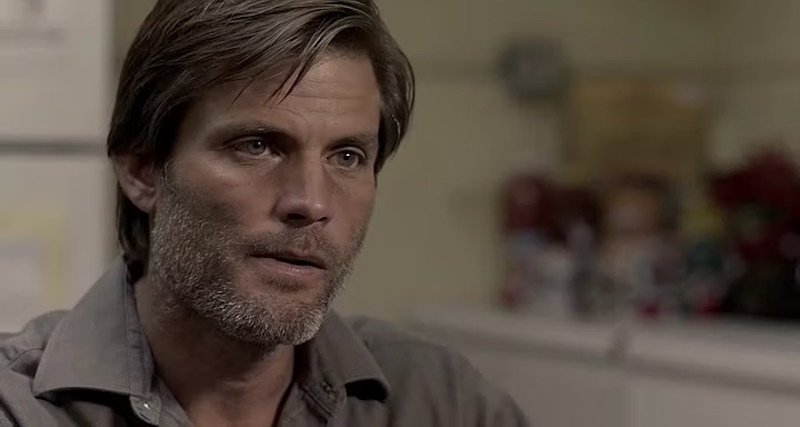 Editor's Note: This was originally published for FANGORIA on July 6, 2012, and we're proud to share it as part of The Gingold Files.

In The Pact, Casper Van Dien plays Bill Creek, a small-town police officer embroiled in a supernatural mystery. It’s the latest authority-figure role for the actor, who plays a similar part in the upcoming Shiver and served as an executive producer on Starship Troopers: Invasion, the latest sequel to the sci-fi epic in which he starred—and he discussed all three roles with Fango.

The Pact (written and directed by Nicholas McCarthy, based on his well-received short of the same title) stars Death Valley’s Caity Lotz as a young woman who returns to her childhood home following her mother’s death. As she tries to solve the mystery of her sister’s disappearance in the same house, she enlists Creek’s help in confronting the house’s horrible history. In Julian Richards’ Shiver, Van Dien’s Detective Delgado becomes involved in the case of a serial killer (played by Wolf Creek’s John Jarratt) and his latest potential victim (Danielle Harris), while Invasion (coming from Sony Pictures Home Entertainment) is the first animated feature in the Starship Troopers franchise, for which Van Dien played heroic Johnny Rico in the first and third movies.

Can you tell us a little bit about The Pact’s Bill Creek?

He’s a cop who’s had some life experience, and is kind of a rougher-edged guy. He maybe sees salvation in helping this girl played by Caity Lotz, and it’s about the struggle that goes on with actually stepping up and being there to help someone. He’s had his own struggles in his life, at least with what I’ve put into this character. Some if it was already written, and some of it came from my own imagination and the things I’ve been through in my life. This character has wrestled with alcohol, and I’ve had my own battles with that in the past, and with relationships, and I’ve had struggles with that too. And then dealing with children—there’s a line where he says to this girl that she reminds him of his daughter, and I could totally relate to that, being a father of four daughters and one son, and knowing what it’s like to go through that.

Were you familiar with the short version of The Pact before you came on board the feature?

Yeah, I was. I got to see the short, and I thought it was really good.

How did Nicholas McCarthy handle directing his first feature?

He was an awesome man to work with. I loved that he was so knowledgeable about this genre, that he put his heart and soul into this and that he was able to turn it around and use the same crew he did on his short. I loved the way he treats the audience, too, when I saw the final product. You know, sometimes I’ll see a horror movie, and it doesn’t make any sense and it’s all crazy and there’s lots of blood that doesn’t really seem to fit. This one is more intelligently done, and treats the genre with more respect than some horror films have lately.

Do you think that was a function of McCarthy doing it independently, as opposed to with a studio on a larger budget?

Well, I think when anyone is trying to make a film, their intent is to do something good; I don’t know too many people who try to go out and make something bad. But you could see Nicholas’ fandom when it came to this genre. You could see it in his short, in the writing of the [feature] script and in the end product; you could see that this is somebody who truly respects and likes this genre. I don’t know whether that would be lost on a greater budget, but I can tell you that his intentions, in my opinion, would be strong no matter what the budget was, because he really is a huge fanboy [laughs]; you can see that he loves this genre.

Do you think you might reteam with McCarthy on future films?

Good question—please ask him! I would love to work with him again on anything he does. He’s a great guy, really solid director, fun to work with and I completely believe in him.

Can you say a few words about your part in Shiver?

Sure. I play a cop again, and it was a lot of fun to work with Danielle Harris; she’s a very passionate actress. And it was great to work with Rae Dawn Chong; she plays my partner, and she’s just phenomenal too. I really enjoyed working with those ladies. I had a good time working with Caity on The Pact, too. She did her own stunts, and was amazing.

Was John Jarratt scary to work with when he was in character?

He was not scary for me at all. He was a total gentleman and a very professional actor. I thought he looked fantastic, and did an amazing job in the role.

You’re also back in your third Starship Troopers movie this year.

I just saw Invasion on Friday, and I loved the suits! I wish we could’ve had those for real [in the previous live-action films]. It was really cool to see them, and the weapons were amazing. So it was just exciting to be part of.

This is your first time as a producer on a Troopers film. How did that come about?

They just wanted to have me and Ed Neumeier, the writer of Starship Troopers and director of Starship Troopers 3: Marauder, be a part of it. It’s been an interesting process, being an executive producer. A lot more going in and talking to different executives, so it was a completely different hat. They asked me questions and had me participate in the creative decisions; it was fun.

The original Starship Troopers was a little bit ahead of its time when it came out, but it’s had real longevity. Do you think that time has now caught up to that film, in a sense?

You know, people still say how well it’s held up, as far as the special effects and the humor. I still have people who stop me all the time and quote the movie, and they’re always tweeting lines from it on my Twitter account. I just did a Funny or Die thing with [Troopers co-star] Jake Busey—which was a blast to do and hang out with him—and he gets the same thing. It’s a film that, for some reason, people still seem to love or hate or whatever it is; it continues to get a lot of attention. And I have this comedy coming out called Noobz [about videogamers competing in a championship tournament] where I play “that guy from Starship Troopers.” So it seems to follow me a little bit [laughs].