Q&A: BEHIND THE MASK’s Scott Glosserman Tells THE TRUTH BELOW 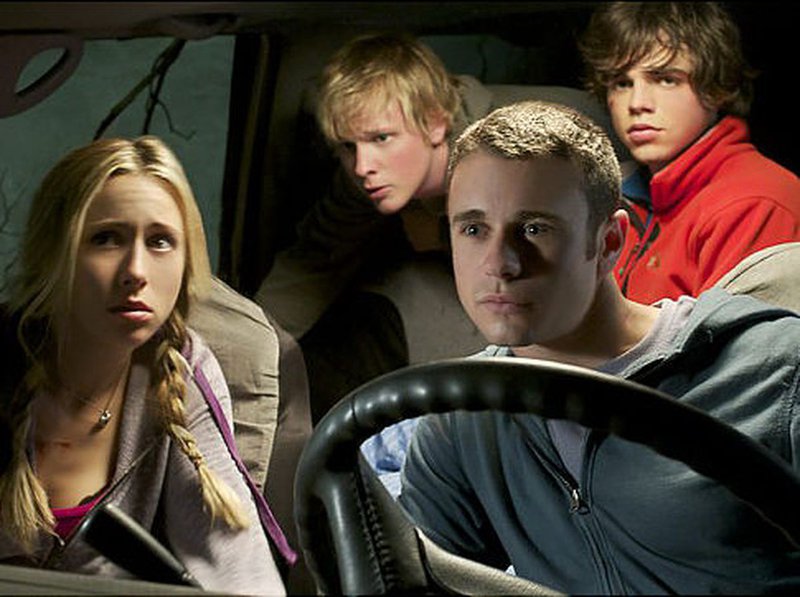 Editor's Note: This was originally published for FANGORIA on June 8, 2011, and we're proud to share it as part of The Gingold Files.

After its success with the My Super Psycho Sweet 16 slasher flicks, MTV goes for more psychological tension in its latest original movie, The Truth Below. Yet the man who helmed it made his name with a stalker opus: Scott Glosserman, who won raves for his debut feature Behind the Mask: The Rise of Leslie Vernon a few years back and spoke exclusively with Fango about his new opus.

Forgoing Mask’s satirical approach, Glosserman aims for screws-tightening suspense with Truth’s study of four young people under pressure. Jenna (90210’s Gillian Zinser), Ethan (Reid Ewing), Dante (Nick Thurston) and Liam (Ricky Mabe) are a college-age quartet heading home from a snowboarding vacation when their car goes off a mountain road and winds up buried in the snow. Unable to free themselves or the vehicle, they decide to play a game in which they share secrets from their pasts, slowly revealing dark sides and threatening each other’s ever-dwindling hopes of survival…

That’s correct. I spent a long time developing the script. I was familiar with it for over a year and trying to get a meeting with the writer [Wendy Diane Miller], because I had a particular take on it and was super-excited to discuss it with her. But there were a couple of different encumbrances; I think there was another director attached for a while. But when we finally sat down together, we totally gelled, and by that afternoon we were committed to working together. We developed several iterations of the draft together, and got it a place where we both were really, really pleased with it.

Then I happened to be at MTV talking about some other projects, and they wanted to know what else I was working on. It was a great example of perfect timing; we had just gotten the script to a place where I loved it, and I think they were excited about taking on real issues and pushing the envelope for television films, and Truth Below really resonated with them. I was pleasantly surprised, and I was thrilled to have the opportunity to explore these really raw, grounded teenaged/adolescent feelings and emotions and drama. I’ve been trying to think of other television movies that aren’t based on underlying material. You think of a lot of the TV movies that are dramatic and intense, and they’re usually based on some real-life story. We’re an original movie, and I like to think we’re going into unexplored territory and pushing the envelope. I’m impressed and really humbled that MTV put that trust in myself and my cast to allow us to do that. That’s a big responsibility that I hope we’ve delivered on in a good way.

Did they put any kind of restrictions on you? The Truth Below isn’t an especially violent film, but were you restrained in terms of language, the themes explored or anything of that nature?

It really is amazing to me, the…I’m not gonna say the stuff we got away with, because we didn’t really “get away with” anything. But MTV really allowed us the breathing room to push the envelope, and approved a number of things that not only myself, but some of the producers didn’t imagine would be approved. We were able to present strong themes, language and situations, and that’s a real testament to the realistic way we treated this, and the trust that MTV had both in its filmmakers and cast and in its audience, to embrace this type of material.

Would you call The Truth Below a horror film?

No—there are certainly terrifying moments, and situationally, it’s pretty scary. But the tone of it is much more of a suspense thriller, with many psychological themes.

It does seem to follow the trend of recent films about people being trapped in a confined space, like Buried, and also Wrecked with Adrien Brody. What do you make of the fact that at the same time you were developing this, a few other films with a similar theme were in the works?

You know, it’s just amazing. I mean, we could talk about, how did Deep Impact and Armageddon happen at the same time? There’s this ether that occurs in the air. I was so excited to see Buried for so long; I missed it at a couple of festivals, and finally got to see it in Austin at Fantastic Fest, and was so impressed. Not to completely digress, but one of the biggest crimes was that neither the director nor the cinematographer of Buried was nominated for an Academy Award, because I thought what they did in that movie was so impressive. But yeah, there’s a movie that Joel Schumacher’s about to direct called The Hive, with a girl trapped in the trunk of a car… There are so many screenwriters starting out, and I think they tend to gravitate toward contained movies—something that doesn’t take a tremendous amount of physical production to make. Even a movie like Saw is pretty contained. So there are lots of those scripts in Hollywood—though there are very few that are actually good. But it just so happens that some very high-quality, contained suspense thrillers have been made and written recently.

How did you deal with the particular challenges of this one, where you’re pretty much trapped inside the car for the better part of the movie?

Well, the key was to convince the powers that be to purchase multiple cars so we could chop them up, and get our cameras in very unusual, sort of omniscient places, and light it in such a way that we could have dynamic movement. It really increased the production value. Fortunately, the producers saw what we were trying to do and trusted our vision, and gave us the tools we needed to make that happen. If you’re gonna shoot a movie in a car, and you’re just sitting in there with a handheld camera…that’s obviously not how you’d wanna go about it. So being able to cut Suburbans in half—we were very, very fortunate to be able to do that.

How about selecting your cast? Was there any particular quality you were looking for during the auditions?

Before I sort of married myself to particular looks or intricacies or physical movements, I wanted to make sure I cast incredibly intelligent actors, who were confident in their own choices and their own skills. Being in such a confined space, there’s so much emotion in there, and so many things that needed to be conveyed with very little movement. And I also wanted to connect with the MTV audience, which is younger than me—but I knew my cast was going to be a lot more familiar with them. And some of the preconceptions I had about my cast, about my characters, some of the archetypes and most importantly about Gillian’s role, Jenna, got overturned. Gillian and I had some amazing, unbelievable talks about her philosophy, about pop culture, about women and young people and femininity and sexuality. And they informed my directorial decisions as much as I informed hers, and the other actors’.

The cast was spectacular. They were all anxious to do something different. Gillian’s role is completely different from the one she plays on 90210, and she really stepped up to the occasion. Reid Ewing also goes completely against type from what he plays on Modern Family, and I think people will be amazed at his performance. They all brought it; Ricky Mabe has been in the game for a long time, a lot longer than many others, and he brought a real even-keeled, professional quality to the cast. He was a great anchor for everybody. And Nick Thurston’s a movie star; he’s incredibly charismatic and bright. All of them were so prepared, so professional, so talented, and it just made my life as a director that much easier. The other thing is, we were all friends, a big happy family, especially given that we were in a confined space for such a long time, and we all got along tremendously.

Was it a bit of a leap going to this movie, which is very seriously intended, from doing Behind the Mask, which is much more satirical?

You know, not really. I’ve developed a lot of material since Behind the Mask. I’ve done a serious, intellectual documentary about Wikipedia, and I’d written a serious horror film for Paramount during that time, and was very comfortable with this more serious-toned movie and content. So for me, it wasn’t difficult. If I wasn’t confident about doing something serious, I think it would reflect in the end result—but I was very anxious to take this project on, and I had a crystal-clear vision about what I wanted to do, so it didn’t bother me that there wasn’t a lot of comic relief.

I’ve just been thrilled to have the opportunity to take Truth Below in a direction that totally changes my opinion of what a television movie can be. And it gave me the opportunity to stay grounded and raw and real, working with issues that young people really deal with and the secrets that they keep, in a way that I think is very relatable. It’s been great getting to do something like this.