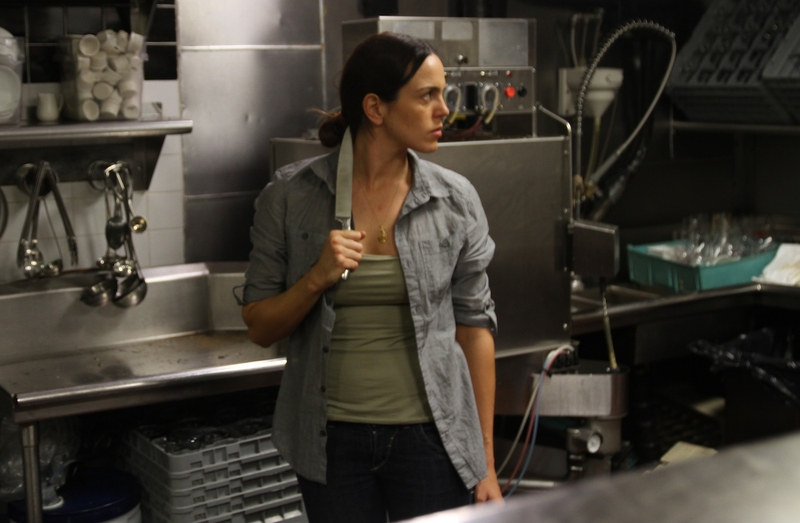 Editor's Note: This was originally published for FANGORIA on September 5, 2014, and we're proud to share it as part of The Gingold Files.

One of the year’s best genre performances is given by Marta Milans as the moving center of the accomplished psychological chiller Devoured. In director Greg Olliver’s film (reviewed here), the Spanish-born, New York-educated Milans plays Lourdes, a Mexican immigrant surviving through her job as a cleaning woman in a lower Manhattan restaurant, where she’s tormented by her boss and, apparently, a supernatural presence. The actress empathetically portrays Lourdes’ dissolving mental state, as well as her resilience and devotion to her young son back home, for whom she’s trying to make enough money for a life-saving operation.

It’s the biggest feature role yet for Milans, who has previously been seen in Steve McQueen’s acclaimed Shame, as a regular on TV’s Killer Women and as a guest on Law & Order: Special Victims Unit; she also has a role in this fall’s release The Disappearance of Eleanor Rigby. Her work in Spain includes 2010’S La Piel Azul (Blue Skin), a seabound two-part TV movie for director Gonzalo López-Gallego, who went on to helm Apollo 18 and Open Grave.

How did you get involved with Devoured?

I first auditioned for the director and writer [Marc Landau], and the way the story was presented was interesting to me, because it wasn’t like a typical horror movie at all; it had a lot of layers and a lot of depth. I was very attracted to that, and when I auditioned for them, they had me do some improv in the room. I really liked the approach they were taking and the way they wanted the story to go, so I had a very good feeling with them in the room. One thing led to another, I got a callback and then I got the part.

Devoured and the role of Lourdes are in the tradition of great psychological-breakdown movies, going back to Roman Polanski’s Repulsion. Did you watch any past films to find inspiration for your part?

Well, I’m not a big fan of horror myself; I’m kind of a wimp when it comes to scary movies [laughs]. When I got the part, I actually told Greg, “I don’t really know much about scary movies, so just tell me where to go to prepare for this role.” For me, it was more about honoring the character, scary movie or not. The important thing was being able to understand what Lourdes is feeling and what she goes through. I worked with a psychiatrist who’s a friend of my family; that was more what I was gearing toward in getting prepared for the role.

Did it help that you shot on location in the restaurant, especially in the creepy areas downstairs?

Yes, it did [laughs]. It also helped that we mainly did night shoots. I basically lived like a vampire in New York for over two months, where we would sleep during the day and film at night, whenever the restaurant would become available. It was very isolating and lonely, but it served this character very well, because that’s how Lourdes lives. She’s completely isolated from society, always working at night, always by herself, always surrounded by darkness, and we were actually surrounded by darkness all the time. I wasn’t actually by myself, because I had the whole crew, my whole team around me at all times, but it aided my feeling of isolation to be able to honor Lourdes’ solitude, and the locations definitely helped.

How about filming the scenes with the ghosts?

That was actually a lot of fun. It’s funny that when you shoot things that are supposed to be intense and scary, the actual process is really entertaining, with all the makeup and the fake blood and stuff like that. It was fun to see the makeup artist working on the actors playing the ghosts. Once we were ready to do the take and I had to get into character, then I’d get all scared and emotional, but the process leading up to those moments was the highlight of the filming.

Did you ever actually get scared or startled doing any of those scenes?

Yes, I did. There’s a scene where I get locked in the walk-in fridge in the basement of the restaurant and a ghost comes up behind me, and when I was actually in that fridge, completely locked in, it really scared me. I’d turn around and see the guy there and be like, “You’re being really scary right now. I’m getting afraid.” He was a lovely man, but I do remember that scene not being so much fun. It was kind of creepy.

Family is very important to Lourdes’ character, particularly her son; was there anything in your own family situation that you drew on?

There are certain secrets about Lourdes that we don’t find out about until the very end. How did you go about playing those aspects of the character without giving the game away?

Well, the way I worked on Lourdes was, she has multiple personality disorder; she’s a woman with a very dark inner turmoil resulting from a major trauma at an early age. The way multiple personality disorder happens is, something triggers in your mind when you suffer a trauma, generally when you’re very young, and in order to protect your personality from that mental abuse—which tends to be sexually oriented, or involve a betrayal by a parent or guardian—your psyche splits and creates this other personality that’s there to protect you, the victim, from the abuse. Normally, that second personality is stronger and more powerful.

So that’s how I approached Lourdes; I created this alternate personality that I had a name for and a set of characteristics that were very different from Lourdes, body language-wise, even voice- and gesture-wise, and I was very clear as to when Lourdes was being Lourdes and when she was this other person. I had to do that because, as you know, you never shoot a movie chronologically, so I had to know exactly when all her changes were taking place while we were shooting completely out of order. That’s how I marked up my script, to make sure that, OK, in this moment she has become this other person, in that moment she is still Lourdes. It was very tricky to do that, and took a lot of prep work on my side, but I think it really served the movie to make her a compelling, rounded character, and believable in her struggle.

Can you talk a bit about working with Gonzalo López-Gallego on La Piel Azul?

Yes! Gonzalo is an amazing artist, who I was so blessed to work with and whom I adore as a director and a friend. He is going to become, mark my words, a staple in Hollywood, and I am so happy to see him rise to the center stage, because he is brutally talented. I’m proud to say I worked with him and I hope to do so again, and he’s definitely going in the right direction. So, one for Spain—I’m so proud of my peeps!

La Piel Azul is about a group of friends who go sailing, and they all jump into the water but forget to put the ladder down—and it’s a big enough sailboat that they can’t get back on board. All kinds of hell breaks loose, and it’s pretty tragic—and the conditions in which we shot it were also very trying, because we had to film all those days in the ocean, and we had to deal with storms, a jellyfish plague; they had to hire scuba divers to chase the jellyfish away while we were in the water. Gonzalo was such a trouper; he would get in the water with us, in a wetsuit, just to keep us company. Instead of staying on the boat, he wanted to feel it with us, feel the cold water, feel the beginning of our hypothermia [laughs].

So it was a rollercoaster, but he’s such a perfectionist in that way, and so am I, that I was so glad to have someone who would push me, like, “Let’s do one more take, one more take.” And then the wind would blow, the light would change because of a cloud, they’d have to change the position of the camera while we were in the water and he would be like, “Come on, let’s do it, let’s keep rolling.” Having somebody so dedicated to the craft, willing to get cold, get stung by a jellyfish, all those things, was so great. It was an amazing team effort, and you can see the result of that in the quality of the movie. I hope it’ll get a U.S. release sometime, because it’s really good.