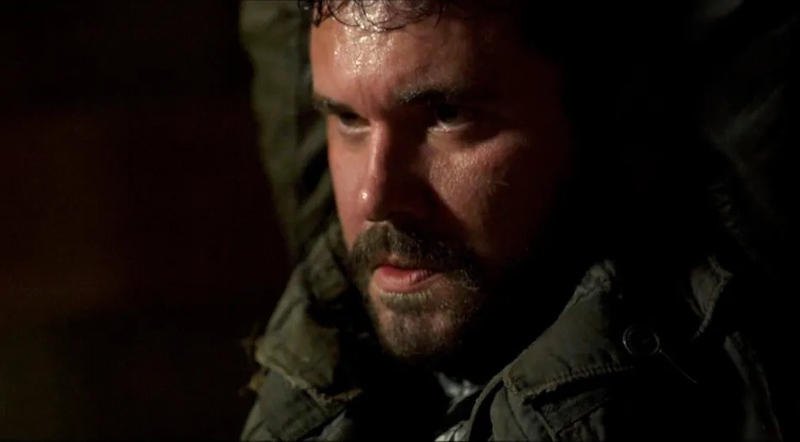 Editor's Note: This was originally published for FANGORIA on November 30, 2012, and we're proud to share it as part of The Gingold Files.

If there isn’t actually a new AJ Bowen movie coming out every month or so, it certainly seems that way. Ever since first attracting attention in 2007’s The Signal, the actor has been all over the fright genre, and now he can be seen in the horror/crime-thriller hybrid Rites of Spring, which he discusses in this exclusive interview.

Written and directed by Padraig Reynolds and released by IFC Films, Rites casts Bowen, who has played pretty unsavory types in the likes of Ti West’s The House of the Devil and Adam Wingard’s A Horrible Way to Die, as one of the more sympathetic characters—still a criminal, albeit a reluctant one. His Ben Geringer gets roped into a kidnapping plot by his girlfriend and brother—a scenario that puts them on a collision course with a bizarre backwoods denizen who has kidnapped a couple of young women (one played by fellow Signal alumnus Anessa Ramsey). It’s one of several films Bowen has done in rural locations, and his involvement began while he was in the midst of another…

How did you become attached to Rites of Spring?

I was in the middle of doing A Horrible Way to Die in Missouri when I got an e-mail from a friend of mine’s manager, saying that he was producing a movie and asking if I would have any interest in taking a look at it, and that ended up being Rites of Spring. When I got the script, it was so different from what I was working on at the time, and such a distinct part, and then having a bit of a relationship with one of the producers, made me interested in hopping on board. I didn’t actually end up meeting Padraig until I got down to Mississippi to shoot the movie, but we’d had a few correspondences via phone and e-mail.

It is kind of a different part for you, as you’re one of the more likable characters this time.

Yeah, it’s a change; I’m not choking women or stabbing people [laughs]. Another thing that was interesting about it for me was when I started hearing that Anessa might come on board. She’s a good friend of mine, and it was very exciting to get to act together again at a pivotal moment in the movie—being in one story and having another story collide with it, and having that happen with a close friend. I was there about a week and a half before Anessa, and once she got there, we would go to set every day together and ended up filming together for probably a good half of the shoot, about the same amount of time as we did on Signal. And all of the crew and cast stayed in the same hotel, right outside Canton, MS; we were the only people in that place, except for when a biker gang showed up randomly. And I’m a set nerd, so even when I’m not shooting, I’m down on set hanging out the whole time.

How was it shooting in real locations like the slaughterhouse, etc.?

For me, that’s always helpful as an actor, because I’m lazy, so I don’t have to pretend things like if we’re on a soundstage with a greenscreen. It was tricky in a couple of scenes; one of the main locations we ended up at—actually the spot where Anessa’s character and mine end up literally colliding with each other—was a very old, abandoned school. I think it had been vacant since the ’50s, in rural Mississippi at that, so there were a few tricky things. I’m kind of arrogant and like to do my own stunts if I can, so I was talking a lot of crap, like, “No, I’ve got this, I can throw a chair and dive out a window, it’s not a problem.” When it came time to actually do it, it was in a room probably 60 feet off the ground, with holes in the floor that in some places went down past the ground level and into the boiler room. We had to tape those off and be very aware of missing them, or else we’d get the picture wrapped immediately, permanently.

So when I went to do this one stunt, there was a hole like that right in front of this window, and the deal was, I was supposed to get a running start and jump up into this window frame and dive out onto the roof. Well, it was 3 in the morning, it was raining, and the roof was about 8 feet wide and I’m 6-foot-2, and it was at about a 45- or 60-degree tilt. So I had a very small window, and suddenly I was like, “Oh God, I wish I wouldn’t have told everyone I would do my own stunts, because I’m probably going to die doing this, and it’s going to be really lame to die in this building all because I have a big ego.”

So in that regard, it was tricky in some spots, but overall it was really good. It was May, so it was like 195 degrees, 1,000 percent humidity; it was nasty, but I think those things only helped both the acting and the look of the production. That matched the tone of what Padraig had written, because it’s this sweaty, pulpy story, and to have those elements just helped. I think I lost like 15 pounds of water weight, just sweating.

By this point, you’ve had a lot of experience doing horror films on rural locations…

Yeah, it’s funny; I came to LA to be an actor, and I keep going back to places that are very similar to where I came from. I left Athens, Georgia about a decade ago, and I keep saying, “I’m never going to go back there!” but I’m always traveling to all these other places. So I have a lot of experience with places like Piggly Wigglys; that was really the only place to hang out outside of Jackson, and I’m not even joking. Anessa and I would go down there once a week and see what new Piggly Wiggly T-shirts they had; that was our big fun thing to do.

Very enthusiastic. I appreciated it. I’d been in kind of a strange place, where for a couple of years I was in an art world, if you will, and there were a lot of conversations about art and the movies I was making—“What does this mean?” Which was great, and I was happy to be in that world, but what I immediately liked about Padraig’s script, and that went through into him as a person, was that it reminded me of movies I watched growing up; it was very straightforward. And when I met Padraig, we immediately started talking about films we liked, and then punk rock and other things we’d grown up on, and it was really good for me to take sort of a left turn into a project like that. Padraig was easily, easily the most enthusiastic person on that set every day.

He’s said that he intended Rites of Spring as the first film of a trilogy; did he share any of that information with you?

Oh yeah, yeah. There’s lots of time when you’re lighting shots in backwoods Mississippi, and I’m pretty sure I received an oral telling of a very detailed plot synopsis and breakdown for the second and third films. So that’s not just a story; he has written and is prepping two other films; he planned it that way.

I’ve been doing a lot of writing; I’ve finished a couple of scripts with my writing partner Susan Burke, and we’ve gotten some interest in them, so we’re looking to shoot one of those soon. And I’m going to be flying over to London and making a movie with [director] Paul Davis and Tom Savini that I’m super-excited about, Silent Night of the Living Dead. I’m going to be playing the son of Savini’s character, so I’m very excited about that.