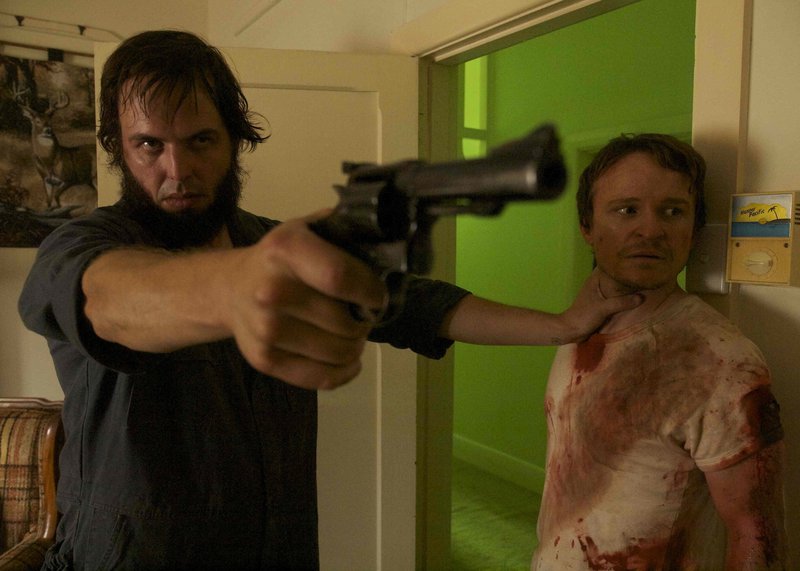 Editor's Note: This was originally published for FANGORIA on June 29, 2013, and we're proud to share it as part of The Gingold Files.

The Australian Outback is an especially dangerous place to be in 100 Bloody Acres—but this time the intent is for audiences to die laughing as well as gasping, as sibling filmmakers Colin and Cameron Cairnes put a bloody funny spin on rural survival-horror. The Cairnes’ feature debut stars Damon Herriman and Insidious’ Angus Sampson as Reg and Lindsay, brothers whose fertilizer business has taken an upswing since they started grinding up human flesh to add to the mix. They’ve been heretofore using dead bodies, but when a trio of young people (played by Anna McGahan, Jamie Kristian and Oliver Ackland) become stranded in their territory, Lindsay and (more reluctantly) Reg start considering using fresher product. The brothers traded off in taking about their blackly (and redly) humorous movie…

You started out doing short films; how did you move up to doing this feature?

CAMERON CAIRNES: We’d been making shorts for 10 or 15 years on our own for no money—shooting them ourselves, acting ourselves, cutting… While doing that, we were always writing feature scripts, and the great hope was one day, somebody might be interested enough in financing one of them. We started writing 100 Bloody Acres probably about 10 years ago, and it went through many different drafts and a lot of development. Originally, it was meant to be done on a very low budget, and we had a producer attached but it wasn’t really going anywhere, and it ended up being dead in the water for a couple of years. Then we met a producer named Julie Ryan, who’s been quite successful in Australia; she’s got 10 or so features under her belt, so she knows how to work the system and get government financing as well as private investments. Once she optioned the script, it all happened really quickly; within a year, we were shooting it.

Did the recent resurgence in Australian horror films help to get it off the ground at that point?

CAMERON: I don’t know if there was a real resurgence by that point; maybe that was a couple of years before. I think the funding agencies had probably lost a little faith in Australian-produced horror. It was looking good for us for a while there after Wolf Creek, which was quite a success here and abroad, but then they started backing more genre stuff that wasn’t quite as successful, so confidence in it was pretty low when we came along. Perhaps it was the comedy elements that got us across the line—they saw there was something else going on. And now I think Aussie horror is coming back again; recently, we’re seeing things like Mark Hartley’s upcoming remake of Patrick, Crawlspace by Justin Dix, our special effects guy, and there are a few other projects on the boil as well. And obviously, we can also be proud of guys like Leigh Whannell and James Wan, who have flown the flag for Aussie horror overseas.

And you got Angus Sampson, Whannell’s onscreen partner from Insidious, in 100 Bloody Acres.

CAMERON: Yeah; we worked with Angus on a short film called Celestial Avenue, which was more of a straight comedy. He’s a terrific guy, a terrific actor. He’s got a particular way of working—he’s a bit Method, but just a joy to work with. He always brings so much more than you could ask for, and elevated Lindsay to a point where he’s almost a sort of iconic villain.

One of the fun things about 100 Bloody Acres is its very specific Australian flavor, which is even more present than in some of the other films produced there, from the dialogue to the great soundtrack of vintage songs.

CAMERON: Yeah, we just wanted to celebrate all of that stuff. It’s funny—the film seems to be traveling well, and whether that’s just because of its exotic nature, I don’t know. There are a lot of references that are quite specific and that only an Australian audience would get, but we watched a preview last night with a largely American audience, and while they weren’t getting a couple of those, they were still going along with the movie, and I think because the characters and the story and the world are so strong, those little details weren’t such a big deal.

The movie is also more lighthearted than some might expect; it’s not as brutal and dark as other films of its type. Was that intentional?

CAMERON: Oh, definitely. When we originally set out, we wanted to make a pure horror film without the laughs—it was going to be our homage to ultraviolent ’70s independent American horror. But after we started scripting it, Wolf Creek came out, and Greg McLean did such a terrific job with it that we felt we had to do our own different take on that particular premise. We just can’t help but write funny, I guess; all our short films have been comedies, and that just naturally came out in the writing of 100 Bloody Acres. We would sit around and try to outdo each other, and shock each other with gags and lines and situations. The humor just naturally came out because of who we are.

Since you’re brothers and your villains are as well, how did your own personal dynamic inform the way you created those characters?

COLIN CAIRNES: Good question. It wasn’t something we were overly conscious of as we wrote, but without a doubt, back in the day when we were kids, we would brawl and fight and it would all end up in tears. Fortunately, we got all that stuff out of our systems early on, and since our late teens we’ve basically been good mates. But no doubt some of that experience filtered in. There are all sorts of character bits that found their way into the film. For example, I wouldn’t say Lindsay is based on our father, but a lot of his language and demeanor, the great Aussie slang—the way he swears, to put it bluntly—is based on the way he speaks. We told him, and he’s very proud of the fact that we liken him to this insane murderer [laughs].

And since there’s only a trio of would-be victims, there’s a little more time spent developing them than you often see in films like this.

COLIN: Well, one or two of them might be killed off in the end, but our interest is in characters, and the comedy comes from the complexities of those people and the interesting dynamics between them. We watched the film last night for the first time in probably nine months, since it premiered in Melbourne last year, and we were always concerned that we dwelled on that stuff maybe too much in the beginning, but I think it feels right. You need to really care about them, and get to know them. They’re not just ax fodder.

And yet when things do get bloody, they get outstandingly bloody, and the FX are terrific. How did you hook up with Justin Dix to create them?

COLIN: We’re from Melbourne, and Justin is also a Melbourne boy. He’s the go-to man in Australia for special makeup effects. We met him years ago while we were first working on the script; we weren’t going anywhere with it, but we thought we’d catch up with him anyway and let him know this project existed. Then, when we finally got the financing, he was the first guy we went to and said, “Can you help us out?” And he did. He did a brilliant job with not a lot of time or money. I believe he himself would say it’s some of his best work; he’s particularly proud of what he pulled off.

You also got WOLF CREEK villain John Jarratt for a small role. Was that your tip of the hat to that film, or was he just the best actor for the part?

COLIN: A bit of both. We thought that was one for the fans; obviously everyone knows Mick Taylor, and we thought it would be amusing to play with that type and turn Mick into the lawman, and quite a bumbling one at that. So it was just a bit of fun, playing with people’s expectations. It was a big scene, but we had John for all of a day, and he came out and delivered, just nailed it. Great, great guy to work with. Hopefully, the fans of WOLF CREEK will enjoy seeing him in a slightly different light.

How has the film been received overall in Australia so far?

COLIN: We’re getting released the first of August, so we’re a couple of weeks behind the States, which is interesting. We had our world premiere at the Melbourne Film Festival last year, at a theater we used to go to as kids to see Gremlins or Indiana Jones films, so it was a real buzz for us to see it there, and it was very, very well-received. It was just a joy to be able to show it to a hometown audience. The response has been great so far, but time will tell. In about three or four weeks it’ll open in most of the capital cities in Australia, and fingers crossed it does well.

What’s in the future for the two of you?

CAMERON: What we’re working on now is more of a crime/caper comedy, but not without plenty of gratuitous violence. It’s called They Shoot Hostages, Don’t They?—our little nod to the old Sydney Pollack film [They Shoot Horses, Don’t They?]. It’s still definitely within our sensibility and shares the same crazy energy as 100 Bloody Acres. And beyond that, we’re horror fans and want to make more of those, so it’s not like the typical thing of making a calling-card horror film just to get our foot in the door, and then stop. We’ve got a lot of those projects on the slate. This next one is ready to go, but after that, who knows? We’d like to perhaps attempt something like we originally set out to do with Acres, and make a film that’s a little more straight and pure next time.