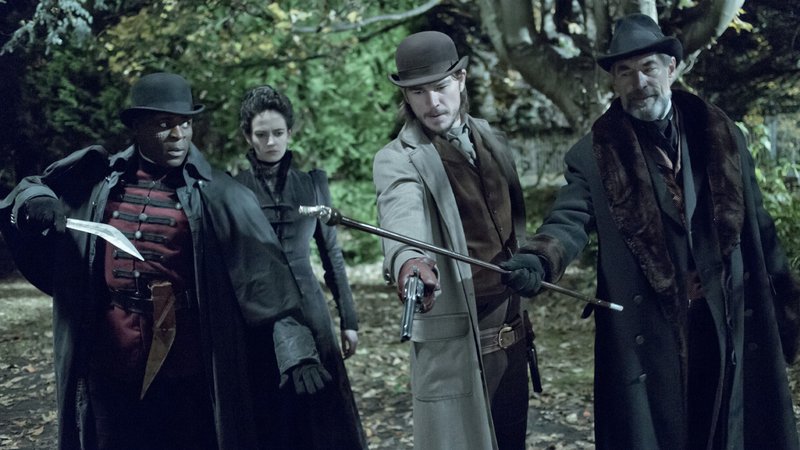 The cast of PENNY DREADFUL.

Editor's Note: This was originally published for FANGORIA on May 8, 2014, and we're proud to share it as part of The Gingold Files.

Classic horror characters from literature and film are coming to TV courtesy of Showtime’s new series Penny Dreadful. At a premiere event in New York City, Fango got some one-on-one time with the cast and creator John Logan—who reveals that the show owes some of its origins to his stint on Tim Burton’s Sweeney Todd: The Demon Barber of Fleet Street.

“Sweeney Todd was a great inspiration in writing this,” says Logan, who scripted the bloody Broadway adaptation as well as Skyfall, Gladiator and other big-ticket features. “I was in the midst of working on that with Tim Burton and Stephen Sondheim when all of this was percolating in my head. Sondheim’s love for the Grand Guignol, for the joyousness of excessive horror, is certainly part of Penny Dreadful.”

Also featured is British actor Rory Kinnear, whose role has been (not entirely successfully) kept a secret during the leadup to Penny Dreadful’s premiere. Let’s just say he’s a man of many parts, and required the actor to spend a great deal of time in heavy prosthetics designed by Nick Dudman, who contributed to all the Harry Potter films and made the monster for Roger Corman’s Frankenstein Unbound. “We did about six or seven gos at it before we got on camera,” Kinnear recalls, “so that was four or five trips out to Dublin, where we filmed it all. The first time I went out, I was in the chair for nine hours, and the second day we did it in eight and a half. Gradually, over time, we finessed it and got it to a point where we were happy and had it down to about three and a half hours.”

Also part of his advance preparation was going back to the series’ literary sources. “I quite like the books themselves, and I knew them reasonably well,” he says. “I got an English degree, so I had studied a lot of them, and it was nice to go back to them and refresh my memory. I marveled at the sort of change in consciousness that happened around that time, and the way the external world became internalized for all those writers.”

Beyond the supernatural side, certain real-life horrors of the period also inform Penny Dreadful, as Treadaway explains. “Back in the Victorian era, there were incredibly dark practices going on in the medical world—stuff that we would now balk at, I’m sure,” he says. “You know, medical ethics were pretty thin on the ground, so they were able to work in ways that would never fly today. There were some pretty gruesome things going on in those times.”

His Frankenstein, however, has lofty aspirations inspiring his cutting up and reassembling of bodies. “John’s scripts present an incredibly interesting portrait of a young man living in the Victorian era who’s obsessively driven to look into life and death, where we are and how we all exist. He really delves into that, and it was great fun to play.”

Speaking of portraits, Carney is “not at liberty to say” when in the show we’ll get a look at the painted picture that reflects Dorian Gray’s evils while he himself remains young and handsome. The actor recalls modeling for the crucial prop: “I sat for the portrait, actually, but not for too long. I think it’s a composite of different things, of elements from different photographs. But I did sit for it, because I think they wanted to get a certain emotion in my eyes.”

Carney came to Penny Dreadful after starring in Broadway’s Spider-Man: Turn Off the Dark, trading an iconic modern character for a much older, classic figure. Comparing and contrasting the two, he says, “There is a big responsibility in playing characters that people know and love, but at the same time, you have a lot to build upon that already exists. [The two roles are] quite different, and that’s the reason I was excited about doing this, because I don’t like to do the same thing twice if I can avoid it. I wanted to get as far away from Spider-Man as possible, so that’s why I’m here.”

Green, on the other hand, had no specific literary source to draw on for the original character of Vanessa. Not that one was necessary, she points out: “The script was so meaty in the first place; it was all there. I did watch documentaries on possession and weird mental diseases and all that [laughs], so that was interesting.”

One of the elements that stands out for the actress is Vanessa’s strength, which sets her apart in the show’s setting. “She’s quite ahead of her time,” Green says, “hungry for life at a time when women were very repressed. She knows what she wants; she’s her own woman. At this time, women were supposed to be dutiful and sort of dull, and Vanessa has a real personality and is full of fire. She’s a really great character.”

Sembene, Sir Malcolm’s African right-hand man played by Danny Sapani, is another part created specifically for Penny Dreadful, and a similarly atypical presence. “There’s an alienation effect that’s a given about being a black man in Victorian London,” he explains. “I think all horror has an element of alienation to it. All the characters are somehow outsiders.” Sembene, he adds, “is kind of an amalgamation of many characters you find in the classic horror novels of the Victorian age. There could be something of a Renfield in there, and perhaps a deep spiritualist of some sort.”

Like his co-stars, Sapani raves about the physical production of Penny Dreadful, which lenses in Dublin, Ireland. “The attention to detail on this production has been second to none,” he says. “They’ve really gone all out on the minutiae and being accurate, and there’s no acting required; you just turn up on set, and you’re instantly in that world.”

“It obviously has a great effect on us,” seconds Hartnett, “and when audiences see it, I think it will help them get into the show too. If those elements didn’t work, the whole show would fall apart, so it’s nice to have a good team and a budget to create this era.”

Another advantage, he reveals, has been the opportunity to view the opening episode while still shooting the later installments. “It’s always exciting to see the work come together, but what’s interesting about this is that we were working on the series—on episode eight—when we saw the final cut of the first one. I’ve never been involved in something before where I was actually able to see part of the finished project while I was working on the rest of it, so it has an effect on what you do from there on forward.”

All of the actors have been enjoying each other’s company and craft over the course of making Penny Dreadful, though Hartnett cites one particular highlight. “I’ve really enjoyed working with [Dalton],” he says. “They’ve all been great, but Tim is just such a wonderful, iconic figure, and it was a lot of fun being on set with him and seeing the way people reacted to him. We had a great time.”