Q&A: Oren Peli On Perfecting PARANORMAL And A RIVER Of Screams 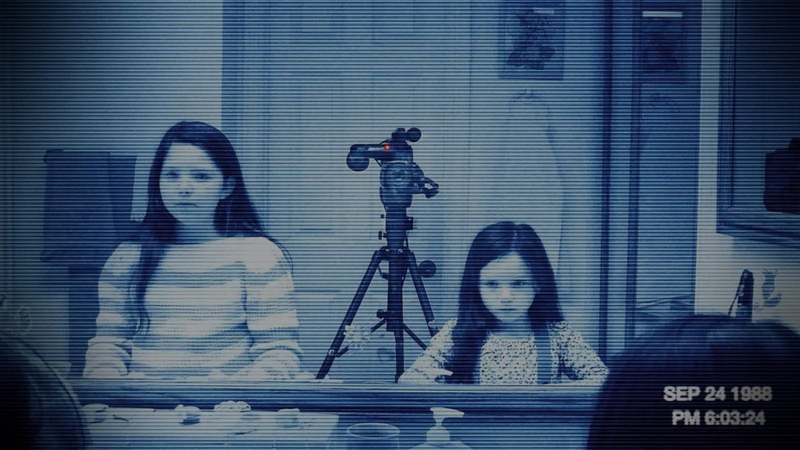 Editor's Note: This was originally published for FANGORIA on January 24, 2012, and we're proud to share it as part of The Gingold Files.

In a few short years, Paranormal Activity creator Oren Peli has gone from a fresh new face on the genre scene to a minimogul, producing the hit Insidious and the upcoming Lords of Salem and venturing into scare TV with ABC’s upcoming The River. And he is continuing to shepherd the follow-ups to the film that put him on the map; with Paranormal Activity 3 having grossed over $100 million last year and now hitting Blu-ray/DVD from Paramount Home Video, Peli spoke with Fango about the challenges of the sequel, and a bit about The River.

Paranormal Activity 3 takes us back to 1988, reintroducing us to the beleaguered characters of Katie and Kristi as children (see review here). It continues the found-footage approach that has worked so well for Peli in the previous movies, and which he employed for his yet-to-be-released thriller Area 51 (about which he declined comment during this interview) and the Amazon-jungle-set The River as well.

Three films into the series, how difficult was it to come up with a concept for Paranormal Activity 3 that was fresh, yet maintained continuity with the previous mythology and made sense in that context?

It was very tricky. After the first movie, I never anticipated in my wildest dreams that there would be a sequel. It wasn’t ever designed to be a franchise; I was very happy with it the way it was on its own. And when we started talking about doing another film, I was very skeptical, because I didn’t know where we could go from there. But then when the writer Michael R. Perry came up with the idea of going back in time to explore Kristi’s family, it all made a lot of sense. We were like, “Wow, that’s really smart. It could actually work.” And when people seemed to respond very positively to it, it became inevitable that we were going to have to do a third movie—and we were like, “Oh crap, now we’re gonna have to come up with an idea for another one…”

But because the second one extended the entire Paranormal Activity world, we kind of instinctively knew it would make sense to go even further back in time and further explore the mythology. We thought it would be a terrific opportunity to go back to the ’80s and create our little homage to horror movies from that period, but also keep it in the contemporary found-footage format. So once we honed in on the idea of focusing on Kristi and Katie as little girls, it all made sense to us, and we felt pretty confident about it.

You had only one credited screenwriter on Paranormal 3, Christopher Landon, after using three writers on the previous film. What led you to narrow it down to just Landon?

Well, on Paranormal Activity 2, we had a lot of drama going on, with our original director [Kevin Greutert] having to drop out because of contractual obligations with the Saw franchise, and there was just a lot of chaos on that production because we were still trying to figure out how to get it done. When we went into the third one, having been through the process of the second, we felt a little bit more confident that we knew what we were getting into. Chris Landon was the last writer on Paranormal 2, so we just kept rolling with him, and he was one of the first advocates for the idea of revisiting Katie and Kristi’s childhood. We all liked it, so he came up with the story, wrote the script and just stuck with us throughout the process.

You hired a director with traditional dramatic experience, Tod Williams, for Paranormal 2, and then for the third you got Henry Joost and Ariel Schulman of the pseudodocumentary Catfish. Were you specifically looking for a filmmaker or filmmakers with that sort of vérité background this time?

We were actually considering a whole bunch of different directors. There were not a lot of people out there we could consider who had experience in cinema vérité; it’s a very, very small niche. So we considered some of those kinds of directors and also some traditional horror-movie directors, and there were some fantastic filmmakers we talked to. At the end of the day, Henry and Ariel ended up being a little bit of a gamble from our point of view, because Catfish, the only movie they had directed, they claim is not even a scripted found-footage movie, but a real documentary. We weren’t sure how those skills would translate into a scripted film, but we got a great vibe from them that they really understood what it takes to create something that feels very authentic. They got the world we were trying to recreate, and even though Catfish is specifically a drama, there are moments that are very, very tense. We felt like, if they can take this romantic-mystery documentary and create so much tension, then they’ll definitely be able to create some amazing scenes in Paranormal 3. We were extremely pleased with them; we took a chance that paid off very nicely.

So are Landon and/or the directors going to come back for Paranormal Activity 4?

Well, we haven’t made any announcements or any decisions, so everything is up in the air, but we would absolutely love to work with Chris Landon and the directors again, because it was such a strong team. We hope they’re going to come back, but there have been no decisions yet.

Do you have any idea of the storyline, or where you’re going to take the mythology in the fourth film?

Yes, we have quite a few good ideas.

But you can’t discuss them.

Is it more difficult, as you go on with such a popular series that’s shot under such a veil of secrecy, to keep the films’ secrets while you’re making them?

So far, we haven’t had too much of a problem. For both Paranormal Activity 2 and 3, we used the same crew, so it became sort of a tight-knit family. Everyone really loves the franchise and respects it, and no one will try to jeopardize it by leaking anything. And in addition, anyone who’s involved has to sign a very, very strict nondisclosure agreement. So if anyone ever wanted to leak something, they would have to think, “What could I possibly gain from leaking information, as opposed to how much fun it would be to deal with Viacom’s legal department and find myself on the wrong side of a lawsuit?” [Laughs] And one other thing is, as the movies get closer to production and release, there is so much noise and so much misinformation on the Internet that even if somebody actually did release the entire storyline—the accurate storyline—you wouldn’t know if you could believe it or not because there is so much nonsense out there.

What’s the process like finding the right actors, especially the kids, for a Paranormal Activity movie, which require a very specific kind of acting? Is it more difficult casting a film of that nature?

It’s extremely difficult, and we were lucky to have an amazing casting director, Terri Taylor, who had worked with us on Paranormal Activity 2 as well. Just in general, finding people who can do this kind of improv style and act in a way that doesn’t look like they’re acting, that they’re just being natural and going about their business, is extremely difficult. In addition, we had to find young actresses who looked similar to our established characters. So it wasn’t that we only needed to find two extremely talented girls, they also had to look like young versions of Katie and Kristi. And beyond that, just working with kids in general can be very challenging.

So it was tough, and we knew that if we couldn’t find the right two girls, we wouldn’t have a movie. We literally went through thousands of candidates, and when we finally saw the auditions of Jessica [Tyler Brown] and Chloe [Csengery], we were like, “Oh my God, they’re amazing!” We were impressed not only by their ability to act, but also by the depth and intelligence behind their improv. During the casting session, it wasn’t necessarily about reading lines; our casting director would give them a certain scenario, and they would basically have to tell it back in their own words. And they added so much detail and life to this story they’d just heard 30 seconds ago, we knew they were extremely bright and talented. That was one of the main things that made us feel confident about the movie; we knew we had such a strong cast, between the two little girls and the adults, that we had the right ingredients for the magic we needed.

Are you also using the found-footage approach on The River?

Yes, The River is a found-footage show, although it feels a little different from Paranormal Activity because what we show in The River is supposed to have been shot by a professional documentary crew, so although it is the same format, it is shot in a much more professional way. It looks more like, say, Survivor or a National Geographic show.

Did you find it easier or more difficult shooting for television, working under those restrictions, than making the Paranormal Activity movies?

Well, in some ways it’s easier and in other ways it’s more difficult. One of the main challenges is just the crazy, accelerated schedule of the TV season, so every time the next step gets greenlighted—the script stage, the pilot stage, the shooting stage—you have a very, very short amount of time to prepare and get everything going. Though it’s not like we have a ton of time with Paranormal Activity, so that process might actually have prepared us a little bit for The River because we have to conceive, write, produce and complete one of those movies in a year, which is a very short cycle for a feature film.

The Paranormal Activity movies are based on being fairly subtle with the horror and not showing too much. Is it difficult, as the films go on, to keep coming up with tricks you can use without being too explicit, and do you carry that approach into The River as well?

Yes, it’s absolutely difficult. We spend a lot of time trying to come up with the perfect scares, and we want to walk the fine line of providing those moments, and wanting to progress the plot and have you learn a little bit about what’s going on, but we don’t want to show too much. We believe that the audience’s own imagination is usually the best tool to help create the scares, based on their own personal nightmares and the things that frighten them. So we spend a lot of time trying to come up with different scares, and we shoot a lot of stuff. Sometimes we think, “Oh! Here’s a great idea!” and we film it, and it turns out great and makes it into the movie, and other times we’re like, “Hmm, it’s not as great as we thought it would be,” and go back and try other stuff. There’s a lot of experimentation, and we shoot a lot more than we actually end up using. That’s also our philosophy on The River; we’re trying to rely more on subtlety and creating tension and mystery, rather than using gore or big CG monsters or anything like that.