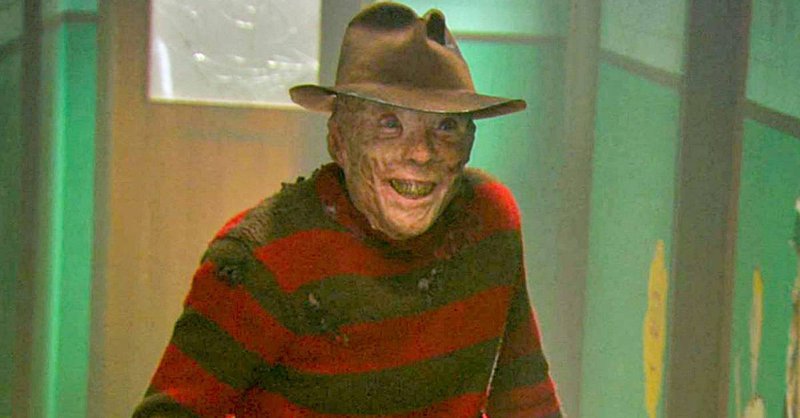 Editor's Note: This was originally published for FANGORIA on April 29, 2010, and we're proud to share it as part of The Gingold Files.

To answer the most pressing question first: Jackie Earle Haley does succeed in making the Freddy Krueger character his own in the remake of A Nightmare on Elm Street. The new movie would be nothing without the right man in the razor-fingered role that Robert Englund made famous, and Haley’s characterization is a major asset in this mixed bag of a reimagining.

Freddy is no longer just the “filthy child murderer” of Wes Craven’s 1984 classic, but a perverted molester who once did awful things to the little students of the unsubtly named Badham Preschool years ago, and this Nightmare brings the uncomfortable themes simmering under the surface of Craven’s movie to the forefront. (The screenplay is by Wesley Strick, who plumbed similar territory in his script for Martin Scorsese’s Cape Fear, and Eric Heisserer.) That makes it extra creepy as the horribly scarred phantom pursues and taunts his “children” in their dreams, and leads to an especially disturbing climactic encounter with teen heroine Nancy (Rooney Mara, in Heather Langenkamp’s old role).

Unfortunately, the film also tries to have it both ways in dealing with this theme, taking the unnecessary and unconvincing tack of having its leads suspect for a time that Freddy, who met his initial horrible end at the hands of vengeful parents, might have been innocent after all. (I’ll save viewers any potential anxiety over this development by revealing the obvious: He wasn’t.) Social relevance can always add more gravitas to a horror movie, but this attempt is just distracting.

Beyond these fresh concerns, Nightmare on Elm Street 2010 replicates most of the important beats from its predecessor, though it also takes a page from Nightmare 4 by starting off with its focus on one potential heroine before switching to another after that girl’s horrible death. In other words, Kris (Katie Cassidy), the equivalent of the Craven film’s Tina, is at the forefront for most of the first act, while Nancy plays a secondary role. She is on hand for the first death, though, working as a waitress in a diner where sleep-deprived Dean (Kellan Lutz) apparently commits suicide in an especially bloody manner. We see, of course, that Freddy was actually responsible, and Kris (Dean’s ex) knows it too, having had the same dreams about the horribly scarred dude with the red-and-green sweater and bladed glove—nightmares also shared by her new beau Jesse (Thomas Dekker), his pal Quentin (Kyle Gallner) and, of course, Nancy.

Soon, more of them are dying in spectacularly gruesome ways, executed via a combination of vivid makeup FX by Andrew Clement (who also came up with a pretty effective new burn makeup for Haley, which achieves a respectable variation on Englund’s visage) and digital gore. Most of the latter comes off pretty well, and when it comes to creating the nightmare setpieces themselves, director Samuel Bayer doesn’t indulge in CGI quite as much as you’d expect, especially from a guy with a commercials/music-video background. (An exception is the startlingly cheesy moment when Freddy morphs out of the wall above a sleeping Nancy.) As often as not, the bad-dream environments and the transitions into them are visualized via spooky set design by Patrick Lumb and cinematographer Jeff Cutter’s creative lighting tricks. The movie’s overall look is generally familiar—Bayer doesn’t go to Craven’s surreal heights or the gonzo places explored by the directors of the later Nightmare sequels—but it does deliver the required atmosphere.

Thematically, Bayer and co. preserve Craven’s theme of the inattentiveness or misguided overprotectiveness of the adults, though they don’t go as far with it, even as they give the moms and dads an even better reason to keep the truth from their kids this time out. (One nice touch is that it’s evident, but goes uncommented on, that all of the parents on view are single ones.) One the plus side, this Nightmare does away with a few of the original’s awkward flourishes; did anyone ever really buy Nancy setting up all those booby traps in 20 minutes? Some fans might miss Langenkamp’s feistiness, though Mara does come off as convincingly haunted and evokes palpable fear when Freddy gets his glove on her in the final act, while Gallner, in the de facto Johnny Depp part, is undeniably well-cast, since he always looks like he hasn’t slept in a couple of days.

And Haley makes for a genuinely fearsome Freddy, even as he delivers a few of the one-liners that became Englund’s trademark as the franchise went on (a couple of them are lifted directly from the previous sequels). More than anything else in the new Nightmare on Elm Street, his reconceived Freddy justifies the revisiting of this material, in a movie that there was really no pressing reason to make. Still, while it’s not quite as satisfying overall as the new versions of The Texas Chainsaw Massacre and Dawn of the Dead or even this year’s unpretentiously solid The Crazies, it’s a darn sight better than the lamentable updates of Prom Night, or Black Christmas, or The Fog, or Friday the 13th, or (fill in the recent remake of your choice)…