Step right up and take a peek at these special features. 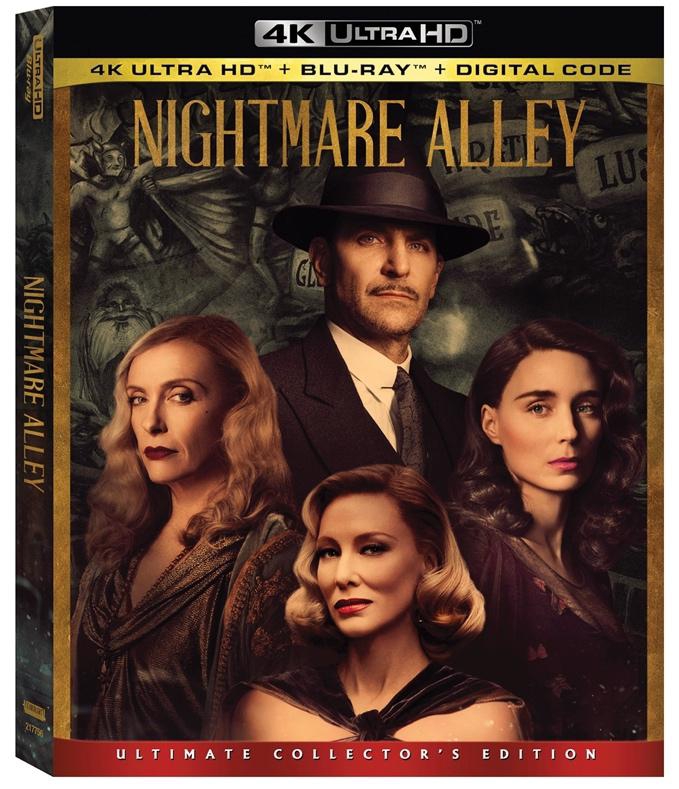 Academy Award-nominated Nightmare Alley is now available on digital, 4k, and Blu-ray. The Best Picture nominee was co-written by Guillermo del Toro and Kim Morgan, based on William Lindsay Gresham’s novel. The film noir follows the charismatic but down-on-his-luck Stanton Carlisle (Bradley Cooper) as he runs away from a past he can't quite escape and joins a traveling carnival.

Once there, he endears himself to clairvoyant Zeena (Toni Collette) and her has-been mentalist husband Pete (David Strathairn). After newly acquired knowledge from Zeena and Pete, Stanton is able to grift his way to the wealthy elite of 1940s New York society. With the virtuous Molly (Rooney Mara) loyally by his side, Stanton plots to con a dangerous tycoon (Richard Jenkins) with the aid of a mysterious psychiatrist (Cate Blanchett) who might be his most formidable opponent yet.

The 4k Blu-ray offers a peek into del Toro's noir world, take a look below for a list of included bonus features.

Del Toro’s Neo Noir – Writer-director Guillermo del Toro and his standout cast decipher the dark, complicated world of Nightmare Alley. The filmmaker reveals how his take on noir is rooted in classic cinema but offers an accessible, modern narrative.

Beneath the Tarp – Production designer Tamara Deverell and her talented team skillfully delivered both a decaying traveling carnival world and a gilded Art Deco high society with striking visuals. We explore how this design supported del Toro’s genre-bending filmmaking.

What Exists in the Fringe – Costume designer Luis Sequeira unravels his collaboration with Guillermo del Toro and reveals the symbolism that’s constantly at play in the film’s carefully crafted wardrobe design.

Nightmare Alley is now available on Digital, 4K and Blu-ray. Click here to get your SteelBook copy now.