Michael Lovan's latest is a game with VERY high stakes.

We have a brand new clip to debut from writer/director/producer Michael Lovan's new horror comedy Murder Bury Win, and I feel like it offers viewers an EXCELLENT sense of what, exactly, this film is playing at. First, some words from Lovan to set the scene:

"This scene is amongst my favorite in Murder Bury Win," Lovan tells us, "Wherein the characters all come together to play the titular board game. One of the most magical things any game can do is foster imagination amongst its players. But when the objective of the game is to harm, murder, and dispose of a body, what does that say about its players, and what kind of creativity is elicited?"

Of the film's singular tone, Lovan has this to say: "My late father loved screwball comedies and, to this day, my mother only watches thrillers or horror films. As anyone can imagine, pleasing them in equal turn was impossible. Murder Bury Win is a Venn diagram for anyone out there who can relate. It's a dark comedic thriller about board games, the meaning of competition, and how to get rid of a body – subjects all parents can enjoy."

Truly universal themes! We also have some fun and bloody pics to exclusively share, courtesy of Lovan:

Murder Bury Win stars Mikelen Walker, Erich Lane, Henry Alexander Kelly, Craig Cackowski and Brian Slaten, and it's out from Gravitas Ventures, available to stream right now, so jump on it! Scroll down for the poster, synopsis and trailer: 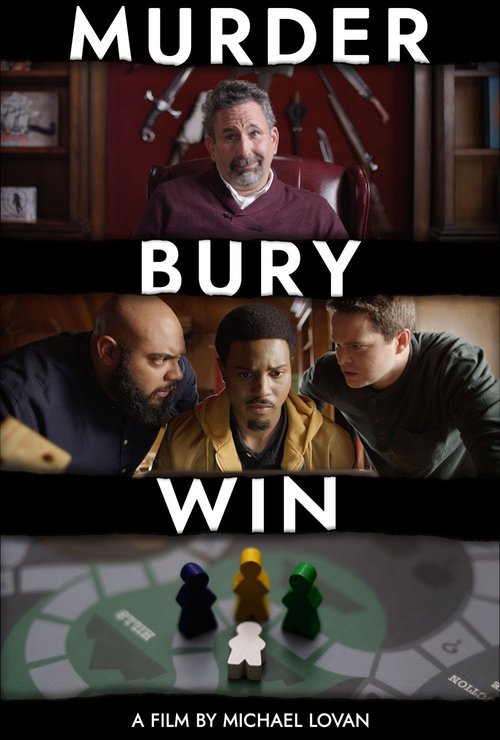 Three friends have created a board game, MURDER BURY WIN, and they think it has what it takes to become a bestseller on the indie charts. When their attempt to crowdfund fails, a mysterious man makes them an offer: he will publish their game on the condition that he takes credit as the sole creator and owner. After a dispute over the gaming rights leaves them with a body on their hands, the young men realize how suspiciously like murder the freak accident appears. Now, with few options remaining, they look to their game for guidance. The premise of their game? How to murder someone and get rid of the body.